The Vishnu Purana, notes A K Bhatacharya, ends on a sombre note, but not without offering the hope that those who chant Vishnu's name can still reclaim dharma. Bibek Debroy's ambitious Purana Project has taken yet another step towards completion.

Even before he began this long journey that this project entailed, Debroy had translated the Bhagavad Gita, the Mahabharata, the Valmiki Ramayana and the Harivamsha from their original texts in Sanskrit into English.

Soon thereafter, he turned his attention to the Puranas or ancient Sanskrit scriptures that dwell on diverse aspects of Hinduism.

He launched the Purana Project with the Bhagavata Purana in three volumes, followed by the Markandeya Purana in one volume and the Brahma Purana in two volumes.

His latest work in this project is the translation of the Vishnu Purana (Penguin) in one volume.

The Shiva Purana is likely to be his next offering.

There are about 18 major Puranas in Hindu scriptures.

Debroy's Purana Project, therefore, has made some significant progress, but a long journey lies ahead.

That he has already completed the translation of four major Puranas should inspire hope and confidence among those who want to read the entire Purana oeuvre in English in the original form.

As Debroy explains, the Purana translations are not an attempt at interpreting the many ideas and beliefs in Hinduism. These are simple translations in English, strictly adhering to the original text.

The annotations are brief and do not disrupt the natural rhythm of reading, but serve the basic purpose of making difficult Sanskrit words easy to understand and providing context to some of the characters.

Debroy retains that style for the Vishnu Purana.

The Puranas capture ancient and medieval stories and concepts of Hinduism in a range and complexity that no other Sanskrit texts offer.

They are influenced in parts by the Mahabharata as many of the stories they narrate are also found in that epic.

The author of the Mahabharata -- Krishna Dwaiypayana Vedavyasa -- is also claimed to be the author of these 18 Puranas, hence the commonality of some stories.

The Vishnu Purana, as its name suggests, is about Vishnu.

Of its six sections, the first one begins with a detailed elaboration of Vishnu, his qualities and his significance.

Sage Maitreya asks his teacher, Parashara, what the nature of the universe is.

Parashara answers the question indirectly and in the process provides one of the most detailed descriptions of the character of Vishnu: 'The universe originated from Vishnu and is established in him.

'He is the cause behind its preservation and withdrawal.

'He is the entire universe...

'He is without transformation.

'He is the cause behind creation, preservation and destruction...

'He is absolute, but he has many forms...

'He is Vishnu, the cause behind emancipation.'

The first section of the Vishnu Purana also shows how it structurally followed the principle of the Pancha Lakshamana -- or five basic attributes.

Thus, the six sections in it are devoted to cosmogony, cosmology, genealogy of gods, sages and kings, cosmic cycles and legends during the rule of different kings.

Note that it is in the first section, devoted to cosmogony, that the Vishnu Purana describes the many attributes of the chief preserver of humanity, according to Hindu beliefs.

The many incarnations of Vishnu are also described in great detail in this section containing as many as 22 chapters.

There are stories of Krishna and Prahlada, son of demon king Hiranyakashipu, and their exploits.

There is a fascinating account of how Dhruva becomes part of the constellation -- Dhruva Tara or the Pole Star.

The second section of the Vishnu Purana is all about the cosmos.

It describes in detail how the earth was born and why different mountains like Meru and Mandara were created.

It provides graphic details of what the land mass of Bharatvarsha looked like, surrounded by many islands and how the mainland was inhabited by different kinds of people.

The reference to the existence of seven continents will remind you how ancient the concept of the world is in Hindu beliefs.

In the 16 chapters of the second section, the stories of the moon, planets and hell are as captivating as the narrative on the evolution of King Bharata from being an omnipotent king to a sage whose faith in Vishnu remained unshaken right through that journey.

There are 18 chapters in the third section of the Vishnu Purana and these are devoted to delineating the idea of time and the transition from one era to the other.

Vedavyasa, the author of the Puranas, makes a rare appearance in a couple of chapters in this section, where his role in classifying the Vedas and other scriptures is explained in detail.

The similarity with the Mahabharata cannot be missed. In the epic also, Vedavyasa appears as a character.

In addition, the Vishnu Purana provides a detailed explanation of the four Varnas or the major castes in which the Hindu scriptures classify people according to the work they perform.

Equally humbling is the justification of the different stages of life ending with the funeral rituals after death.

In sharp contrast to the first half of the Vishnu Purana, containing three sections, the second half is a little ponderous and repetitive.

The fourth section has 24 chapters and focuses on different dynasties and their lineages like those of the Chandra Vamsha, Surya Vamsha, Mandhata and Sagara.

The legend of Krishna including his death by an arrow from a hunter is captured in the fifth section, which is the longest in the Vishnu Purana, with 38 chapters.

The narratives in this section repeat what is commonly known and dealt with in detail in the Mahabharata, the Harivamsha and even in some Puranas.

The final section is also the shortest, with only eight chapters.

It describes in detail the nature of the Kali Yuga, where dharma will cease to exist, and the process towards dissolution would be accelerated.

The Vishnu Purana ends on a sombre note, but not without offering the hope that those who chant Vishnu's name can still reclaim dharma. 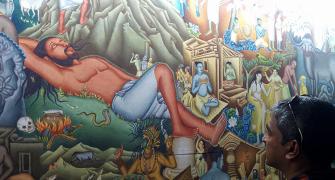 Mythology can help you succeed! Here's how Gita only helps us cope with uncertainty 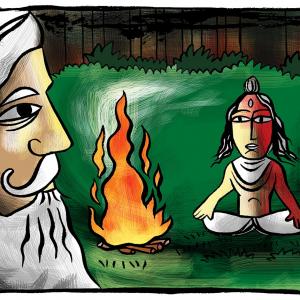