News
Business
Movies
Sports
Cricket
Get Ahead
Money Tips
Shopping
Sign in  |  Create a Rediffmail account
Rediff.com  » News » Why not treat rape as an offence like terrorism? 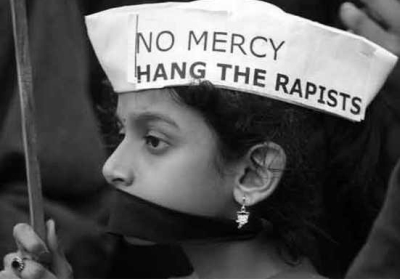 If rape is categorised as a heinous offence to be treated on par with terrorism, this would lead to changes in the way we react and deal with it, the late internal security expert B Raman wrote on Rediff.com in December 2012 in the wake of the horrific Delhi rape case. We reproduce the column for in the wake of the gang rape of a photojournalist in Mumbai.

In our country, crime against women is not treated seriously by the police. Its prevention, investigation and prosecution are given low priority. This was so during the days of the British. This has been so since we became independent.

The responsibility for investigation and prosecution used to be left to a thanedar or head constable with no supervision at senior levels.

One does not know whether the police regulations have since been revised to categorise rape as a heinous offence on par with terrorism, dacoity and murder requiring mandatory supervision at senior levels.

If not, this is the first step that has to be taken to underline the gravity of the crime.

Every police officer holding independent charge is required to submit to his superior a fortnightly report of crime in his jurisdiction. The past proformas of this report when I was in service did not provide for a separate section on crime against women.

The government should prescribe a separate fortnightly on crime against women indicating the measures taken for prevention and the progress of investigation and prosecution.

The attitude of policemen from the constable upwards upto the DG of Police has to change. It has to be ingrained in the minds of policemen during their training that a rape should be treated as seriously as an act of terrorism or a murder.

This change can be brought about only by having a separate and special training capsule on crime against women in our police training institutions.

When I was trained as an IPS officer in the Central Police Training College at Mount Abu in 1961-62, crime against women was given very low attention in the syllabus.

The annual confidential reports of police officers, which determine their promotion, should have a separate column to assess their performance with the regard to the prevention, investigation and prosecution of crime against women.

There are very few instances of habitual rapists. Most rapists are one-time offenders. They rape in a momentary loss of sanity and self-control in the presence of women.

They commit the crime under the sudden onset of a mad urge to rape. It is very difficult to identify potential rapists and anticipate their crime.

Despite this, prevention is the most important aspect of dealing with crimes against women.

Prevention has two aspects -- prevention by women themselves through appropriate self-defence measures. A self-defence measure which can be fairly effective is the use of mini tear-smoke cartridges. These cartridges should be made easily available in the market for purchase by women. There is a possibility of other criminals like dacoits etc misusing these cartridges for overcoming their victims, but this is a risk which has to be faced to enable women to better protect themselves.

Prevention by the police has to be through enhanced anti-rape patrols in areas susceptible to commission of rapes such as transport buses, parking lots and deserted streets at nights.

Since rapists operate more at night than during day time, these patrols should be intensified at night. Intensified anti-rape patrols would also have a salutary effect on other crime.

The police should set up a separate anti-rape control room and widely publicise its telephone number. Every woman should save this number in her mobile and activate it immediately on apprehending danger.

If rape is categorised as a heinous offence to be treated on par with terrorism, this would lead to changes in the way we react and deal with it with the creation of anti-rape squads for prevention, investigation and prosecution and anti-rape tribunals for speedy trial.

Since rape is an offence committed in moments of sudden insanity and loss of self-control, fear of death penalty may not be an effective deterrent. The only effective penalty will be to put all rapists out of circulation through mandatory life imprisonment.

B Raman
Related News: Central Police Training College, IPS, DG of Police, B Raman, Mumbai
Print this article
'I am scared as a father of a 17-year-old daughter'
'It's a shame if you can't be safe at 9:30 pm in Delhi'
'A woman is kidnapped, raped every 40 minutes in Delhi'

What needs to be done to make Delhi a safer city