'If push comes to shove, Pakistan does have the capability to make it difficult for the US and NATO forces to make even a withdrawal of troops out of Afghanistan in orderly fashion,' says Ambassador M K Bhadrakumar. 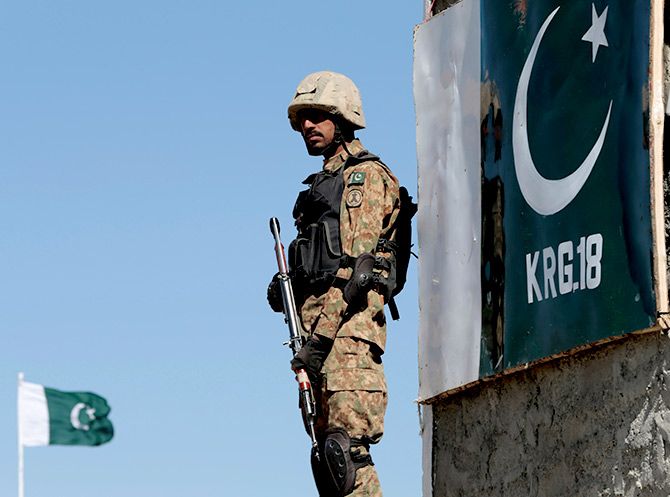 The implicit warning is obvious.

Having said that, lines of communication remain open.

The remarks by US Defence Secretary James Mattis on Friday, January 5, at a Pentagon news conference suggested a mellowed mood already. Plainly put, General Mattis was reluctant to be drawn into any discussions whatsoever on the subject.

Meanwhile, the US announcement of suspension of security assistance and the foreign military financing programme is expected to affect about $1.3 billion worth of annual aid.

It has made headlines in the Indian press, but is unlikely to put pressure on Pakistan.

The point is, the Pentagon is using Pakistani transit routes and operating its flights through Pakistani airspace without paying Islamabad anything.

All that Islamabad has to do, if it feels short-changed, is to ask the Americans to cough up money to use the facilities any further, which would more than make up whatever loss of US aid.

Evidently, this is not a situation that can be leveraged through the power of money.

Pakistan has legitimate interests in Afghanistan. It also perceives an existential threat from India.

Islamabad has been complaining that the US is passive about curbing cross-border terrorism against Pakistan originating from Afghan soil.

Taking all things into account, the bottom line is that Pakistan will not assist the Trump administration to find a military solution to the Afghan conflict.

On the other hand, there is no shred of evidence that the US is genuinely keen on reaching a political settlement either, since that would inevitably lead to a demand for the vacation of its military bases in Afghanistan, which have been established for the pursuit of geopolitical objectives.

Curiously, the Trump administration is yet to appoint a special representative on Afghanistan to open a political/diplomatic track.

Its focus is on defeating the Taliban on the battlefield and proclaim 'victory'.

It is the classic syndrome of the military mind that with just one more push, there will be light at the end of the tunnel and victory will be in sight.

Pakistan is playing it cool. Which leaves the ball in the American court.

Pakistan maintains that it is willing to continue with the cooperation in counter-terrorist operations and is willing to act on any 'actionable intelligence' that the US hands over regarding terrorist groups. But then, this has been Islamabad's stated position all along.

The US is actually playing with a weak hand and the Pakistani military leadership must be well aware of it.

In a brutally frank analysis of the state of play, Richard G Olson, who served as the US ambassador to Pakistan (2012 to 2015) and as special representative to Afghanistan and Pakistan until last year, wrote in The New York Times on Tuesday:

'Pakistan has greater leverage over us (Washington) than many imagine... Without Pakistani cooperation, our army in Afghanistan risks becoming a bleached whale.'

Now, this has come from a senior American diplomat who has had extensive dealings with the Pakistani leadership.

Ambassador Olson has warned that Pakistan is chaffing under the humiliation meted out by the Trump administration and is 'likely to respond by showing how truly it can undercut our (US) position in Afghanistan.'

What works to Pakistan's advantage is that China is strongly backing it and is openly displaying its willingness to stand up and be counted.

The Iranian defence minister telephoned his Pakistani counterpart last week and the Pakistani national security cdvisor met his Iranian counterpart in Tehran on the weekend.

Turkey has also voiced its resentment of the US pressure tactic and bracketed itself with Iran and Pakistan as victims of the Trump administration's phobia against Muslim countries.

Quite obviously, Pakistan does not have to fear any diplomatic isolation. There is much merit in Ambassador Olson's prognosis that the unraveling of the US-Pakistan relationship, which is becoming inexorable, may push matters to a point of no return.

Pakistan holds the trump card in terms of the transit routes -- especially, the overflight facilities -- it provides to the US for supplying its forces in Afghanistan. It reserves the right to use it at a moment of its choice.

The fact of the matter is that the so-called Northern Distribution Network via Central Asia is unrealistic without Russia's cooperation, which is highly unlikely to be forthcoming.

The only other transit routes for the US are via China or Iran, which are as good as non-options.

Again, the regional States harbor misgivings about the American intentions and suspect that Islamic State has made its appearance in Afghanistan as a US proxy for destabilising the region.

Suffice to say, things are moving in a direction that may make an open-ended Western occupation of Afghanistan increasingly untenable.

We may expect some form of regional initiative gathering momentum to kickstart a peace process involving the Taliban, which would marginalise the US altogether.

All this poses a big political challenge for India.

Clearly, there is hardly anything India can do to influence the developing situation. A period of masterly inactivity is the best option under the circumstances.

It will be foolish and dangerous to step up India's involvement on the security front at this juncture.

By the way, 2018 is also a period of transition in Afghanistan and there is much uncertainty about the emergent political calculus in Kabul.

Of course, the Trump administration has said flattering things about India in its so-called South Asia strategy. But it costs Trump nothing to say nice things with the hope of pampering Indian vanity.

Quite obviously, The Trump administration's interest lies in persuading India to do 'more' in Afghanistan. But New Delhi will face total regional isolation if it pays heed to the American wish and falls into Trump's trap.

What is important, on the contrary, is that Delhi must keep the lines of communication open to Islamabad so that misunderstandings or misperceptions do not arise.

Apart from the diplomatic channels, it is vital that National Security Advisor Ajit Doval touches base with his Pakistani counterpart Lieutenant General Nasir Khan Janjua (retired) on a regular basis.

Equally, the importance of holding consultations with like-minded regional capitals -- Moscow and Tehran, in particular -- cannot but be stressed.

If a regional initiative materialises, India should not hesitate for a moment to participate in it.

To be sure, a dangerous period lies ahead.

With its back against the wall as the next 'fighting season' approaches in Afghanistan, US military commanders who have assured their commander-in-chief in the White House that they will achieve outright victory in the war, are coming under immense pressure.

They may resort to risky moves simply to save face or to create alibi for their eventual failure to defeat the Taliban.

However, make no mistake, the Pakistani military will not be browbeaten.

And if push comes to shove, Pakistan does have the capability to make it difficult for the US and NATO forces to make even a withdrawal of troops out of Afghanistan in orderly fashion.