Donald Trump has forced the sophisticated to reveal their real selves, which are as vicious as that of any status quoist in the world, says T C A Srinivasa-Raghavan. 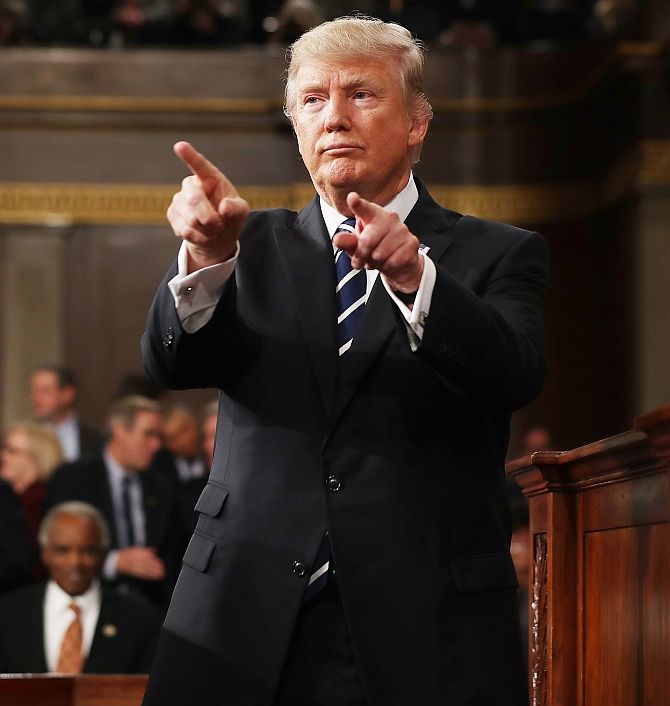 There have always been two diametrically opposed views about the American society.

The dominant one is the pretence that, for the most part, it is a highly sophisticated society intellectually driven by altruism.

The less articulated view is that it is -- if not short in physical stature -- certainly nasty and brutish in its behaviour.

The election of Donald Trump has put both views in sharp relief. More specifically, with reference to the American response to Mr Trump, the worst in everyone in the country has burst forth in all its glory.

The “we are so wonderful” school has been left howling at the moon like Bob Dylan’s tragic hero. Seldom have I seen such bile and acid coming from the elites.

This howling has succeeded in proving the other view of America, namely, that even the intellectually sophisticated are exactly like Mr Trump -- nasty and brutish.

But that is not a cause for surprise. It is what happens when you think an idea is superior to all others merely because you hold it. This failing is especially true of the people of the Western hemisphere.

Indeed, this is exactly like religion. There is, after all, no difference between the god-man who reviles persons of other religions, and the “liberals” who disagree so viciously with persons who disagree with them.

Ramanuja in India, Martin Luther in Europe, the Sufis of Arabia, the bunch of Republicans in France who threw out the Bourbons, Gladstone in England, Lincoln in America, Lenin in Russia, Thatcher in Britain, Roosevelt in the US, Gorbachev in the USSR -- all were derided, scorned and reviled when they first started saying their pieces.

But to their credit they stuck to their guns because intuitively, deep inside, they had grasped something that people were actually experiencing -- that things that had worked previously had now stopped working. They had therefore felt the need for change and suggested ways of achieving it.

This is what Mr Trump is doing in a very forceful way. He is forcing society to consider the new viewpoint. Those who reject him out of hand aren’t doing themselves any great favours.

He has, in fact, already won the war of ideas. He has forced the sophisticated to reveal their real selves, which are as vicious as that of any status quoist in the world when challenged at any time in the past 5,000 years.

To be sure you can grumble about his ways. But is his message wrong? He is forcing change and he is doing it very crudely. But does that matter?

Does it mean there is a prescribed way of forcing a reassessment? And, if there is, should it be laid down by those who have the most to lose by the change that is being demanded?

Take three examples, one each from international politics, economics and sociology. Actually you can take as many examples as you want and the result will be the same.

Mr Trump has forced everyone to think differently and to re-examine beliefs. This is no mean achievement.

In international politics, Mr Trump stands accused of letting down allies and diminishing American power. But no one is willing to answer the question he asks: Why should Americans pay for the security of rich countries? Does anyone ever do that? Has any country done that on the scale America has since 1945? To whose benefit?

In economics, the charge is that Mr Trump is ending globalisation. This claim doesn’t bear any scrutiny because it was the 20th century which actually abridged globalisation by restricting flows of capital, labour and trade as in no century before.

Indeed, if anything, it was the 20th century that ended globalisation and never really got going with it except in the matter of capital flows, and that too in a very limited way. This was the natural outcome of the emergence of so many new countries, and that too with democracy.

Mr Trump is also being pilloried for ending America’s “open and tolerant” character because of his policy towards immigrants. Really? The truth is different.

Between 1700 and 1900, the white population of America allowed open immigration because they needed cheap labour. Even then only whites were allowed in freely; the rest were kidnapped like the Africans in the 16th and 17th centuries and the Chinese in the 19th century. In any case, open immigration ended soon after 1900.

In the end, the damage that men do is more important. By this metric how many of those who curse Mr Trump today will answer truthfully if you ask them about the number of people his predecessors have killed in foreign wars since 1945?

That was ok, was it, their nationalism superior to Mr Trump’s?

Image: US President Donald Trump reacts after delivering his first address to a joint session of Congress from the floor of the House of Representatives in Washington, DC, on March 1, 2017. Photograph: Jim Lo Scalzo/Pool/Reuters. 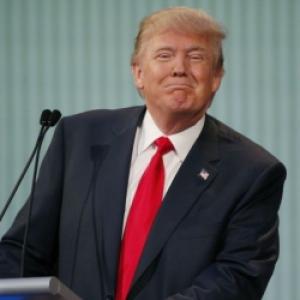