News
Business
Movies
Sports
Cricket
Get Ahead
Money Tips
Shopping
Sign in  |  Create a Rediffmail account
Rediff.com  » News » There is no major threat from 'saffron terrorists'

There is no major threat from 'saffron terrorists'

The LeT terror campaign is backed by the power and resources of a state. To compare this with the acts of a crowd of motley Hindu extremists is like equating chalk with cheese, says Colonel (retd) Anil Athale.

The recent controversy over a politician's remark on 'Hindu terror' and another gem of invoking visions of an Indian Hitler need to be dismissed with contempt they deserve. The former American Ambassador to India, David Mulford's comment that Indian politicians can stoop to any level to garner votes is a ringing indictment of this tribe of politicians.

But such is the power of repetition of lies that there is a great danger of these becoming self-fulfilling prophesies and therefore need to be challenged. An even greater reason is that a politician in wilderness (and a former chief minister) has insinuated that (just like Pakistan) 'saffron' terror has infiltrated even the Indian armed forces. He approvingly quotes the example of a lone wolf rogue officer who is alleged to have got involved in terrorist acts. In the interest of national security, these wild assertions need to be challenged.

As a multi-ethnic, religious and linguistic subcontinent, India faces many revolts backed by narrow ideologies. There is the separatist movement in Kashmir valley (not Jammu and Kashmir but only the valley), Assam, Manipur and Nagaland. In addition there is an on going unrest in heartland of India where the Communist insurgents want to overthrow the state and usher in 'their' version of 'people's republic', popularly called Naxalites. All these movements indulge in use of terror tactics off and on.

In addition to the above, since last two years, a motley group of Hindu extremists have taken to 'retaliate' for the past acts of terror attributed to Islamist terror groups located in Pakistan and who receive some support from fringe element of Indian Muslims.

The groups like the Students Islamic Movement of India or its latest avatar, the Indian Mujahedeen, are essentially an extension of the Pakistan-based Lashkar-e-Tayiba.

A brief look at statistics shows that in the last five years the LeT-led combine has carried out ten major attacks in which over 625 Indians have been killed and over 3,000 have been wounded seriously. Equally startling is the fact that so far not a single terrorist involved in these activities has been punished. Most of the investigations have reached a dead end or the perpetrators have fled to Pakistan. The alleged saffron terror is linked to four incidents in which over 19 people have lost their lives and a few score have been wounded.

But even more telling is the fact that the LeT-led campaign against India is essentially a joint enterprise with Pakistan Army (through the Inter Services Intelligence). While in all other insurgencies including the one in Kashmir valley, there is an element of external support (The Naga rebels do receive Chinese help), the LeT-led campaign is unique in that it is a virtual proxy war launched by one state against the other by using the tactic of deniability.

The Late Krishna Menon, India's de facto foreign minister in the 1950s and early 1960s, was of the view that "Pakistan views partition as only a beginning. Her idea is to get a jumping off point to take the whole of India. Their minds work in this way -- that it was from the Mughals that the British took over. Now that the British have gone back, the Muslims must come back." (Breacher Michael, "India and World Politics: Krishna Menon's View of the World", Oxford, London, 1968. page 171)

Even the former Pakistani dictator General Pervez Musharaf is on record to having admitting that even if Kashmir issue is resolved, relations with India would remain stormy.

The LeT terror campaign against India is thus backed by the power and resources of a state. To compare this with the acts of a crowd of motley Hindu extremists is like equating chalk with cheese.

Even since Al Qaeda and Osama Bin Laden invoked religion to justify their terror attacks, the terrorism tag has been unfortunately put on the religion of Islam. A little introspection will show that the Al Qaeda's newly found belief in the Islamic cause is fake. Osama never tires of invoking the cause of Palestine (and now even Kashmir) to justify his actions. But wasn't the same Osama happily collaborating with the hated Americans through the decade of 1980's in Afghanistan? Was America then not supporting Israel?

The truth is that Osama's basic aim is to grab power in Saudi Arabia. He felt that he had an IoU from the Americans on this. But once the first Afghan war was over, the Americans apparently refused to oblige him. It is only then that he remembered the plight of Palestine/Kashmir.

A general study of 9/11 bombers or even the latest failed Time Square terrorist do not show much direct connection between religious fundamentalism and terrorism. None of these were typically religious people. An MIT study has also similarly shown that there no direct link between poverty and terrorism. Though undoubtedly, like the lone surviving terrorist of Mumbai attack did belong to a poor family, his motivations seem very clearly money!

The growth of religious fundamentalism can indeed provoke riots and disturb peace but by itself cannot lead to terrorism. It is true that riots or mob violence is bad, but it is a like a crime of passion, whereas terrorism is like a pre-meditated mass murder. It is necessary to clearly distinguish these two.

Terrorism that the world faces today is essentially a power struggle and proxy war to achieve this worldly aim. Religion is used only as a cloak to hide the true intentions, be it Osama or the LeT. Even the TTP (Tehrik-e-Taliban-e-Pakistan) is similarly out to grab power in that country.

It is unfortunate that the current political power struggle got the 'Islamist' tag because the terrorist's themselves invoked religious sanction for their acts by selectively quoting from the holy book.

Luckily for the Indian subcontinent, the fact that in Pakistan in last five years there have been over 42 attacks on mosques and over 530 worshippers have been killed while performing namaaz. In the entire period of 63 years these many attacks have not taken place in India. The Indians who fall into the LeT trap must look at this reality and honestly answer the question whether they are safe in India or Pakistan?

One is aware that the incidents of the Gujarat riots in 2002 will be evoked. But the fact is that in these riots (according to the Union home ministry) 800 people lost their lives. Besides this, 232 (mostly from the majority community) were killed in police firing! When one alludes to the ghost of Hitler and German genocide of Jews, one must ask a question, were any Germans killed by their police for attacking Jews? Our modern politicians seem to have not read much history but have surely studied Gobbles' quite thoroughly, and have succeeded in repeating a lie again and again to make it an established fact. This does not in any way condone partisan behaviour of the police or even inability of the government to control the violence quickly enough.

But the worst is the snide attempt to drag the armed forces into the controversy. One would like to remind these unworthies that the armed forces of India have always acted with utmost impartiality in these situations. If any one has doubt go and ask Kutubuddin Ansari, a tailor from Ahmedabad, who told this author with tears in his eyes that it was the timely arrival of the army that saved him and his family.

By sowing doubts about the integrity of armed forces whose interest is this person serving? 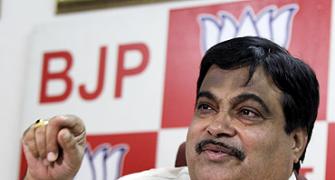 2010: BJP gets it right in Bihar, wrong in Karnataka
Why we must reclaim religion from the right-wing

Is Aseemanand the mastermind of 'Hindu terror?'