'Huma Abedin must follow through in the footsteps of her illustrious mentor Hillary Clinton to carry the movement forward to empower American women,' says Kaleem Kawaja. 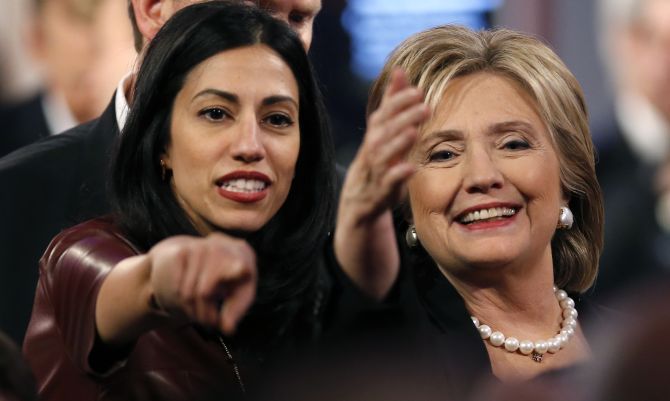 Since Hillary Clinton began her Presidential campaign last year, her top aide Huma Abedin's name is often mentioned in the US and international media.

As vice-chair of Hillary's campaign organisation, Abedin has interviewed and recommended senior staffers, including campaign manager Robby Mook, for appointment.

As news about the Federal Bureau Investigation's move to investigate emails Huma had sent Hillary Clinton from her husband Anthony Weiner's laptop hit the headlines on October 28, Abedin's name, photographs and personal information have been broadcast continously by the American television networks.

Hillary and her campaign have not said a word about Abedin and instead blame FBI Director James Comey for sensationalising a matter that the FBI declared had been settled last July.

Everyone wants to know who Huma Abedin is.

Huma is an Indian-American Muslim.

She is the daughter of Syed Zainul Abedin, a distinguished professor of English who died in 1993, three years before his daughter Huma began to work at the Clinton White House.

Dr Zainul Abedin, a graduate of Aligarh Muslim University and the University of Pennsylvania, migrated to the United States in the early 1960s.

Saleha Mahmood Abedin, Huma's mother, is a professor of sociology at a university in Jeddah, Saudi Arabia.

Huma Abedin graduated from George Washington University, Washington DC, when Bill Clinton was President and Hillary was First Lady. She joined the White House as an intern on Hillary's staff when she was about 19.

When Hillary moved to New York in 2000 and ran for the US Senate, Huma worked on her Senate campaign. Soon a trusted staffer in Senator Clinton's office in Washington, DC, she also worked for Hillary as deputy chief of staff when Clinton was appointed secretary of state in the Obama administration.

The US media has dubbed Huma Hillary's 'Body Woman,' as she is constantly with Clinton. So much so, according to Politico, Professor Saleha Abedin, Huma's mother, told the then secretary of state on a visit to Saudi Arabia that she was jealous of Clinton because her daughter had spent more time with her than she has done with her mom.

Clinton, Politico added, once said that she had a daughter, but if she had another daughter, it would be Huma.

Abedin is the gatekeeper for anyone who wants to meet Hillary Clinton, the go-to-person for Hillary campaign staffers when they want to know the candidate's mind on issues and personalities.

Her unique status in the Clinton camp has brought her -- like people and issues associated with the Clintons -- inevitable harsh attention.

When extreme Republican politicians like then US Congresswoman Michele Bachmann of Minnesota attacked Abedin four years ago, calling her a radical Muslim with connections to radical Arab Muslims, Republican leaders including Senator John McCain defended Huma against those charges.

Through her almost 20 year association with Clinton, Huma, who turned 40 on July 28, has moved skillfully and quickly through the minefield of Washington politics and earned praise from senior Democratic party politicians.

In her extraordinarily fortunate career Huma Abedin has also run into bad luck. Via her 2010 marriage to former US Congressman Anthony Weiner of New York.

Weiner was forced to resign his seat in the US House of Representatives after a sexting scandal erupted. His campaign to become New York's mayor later also came apart when another sexting scandal surfaced. After a third sexting scandal emerged this year -- one unsavoury image Weiner sent a young woman had his young son in the frame -- Abedin announced she was separating from her husband.

The smoke and rumours about the current email controversy created by FBI Director Comey, an erstwhile member of the Republican party (he says he is now an independent), will clear in a few days before the November 8 presidential election.

Hopefully, we will see Donald Trump's unfounded attacks on Huma and Hillary's emails blunted. And God willing next week, Hillary will win the election to become President. That is the day many all over the world are waiting for.

All this heat and dust has prepared Huma Abedin well to run and win elected office. With her name recognition the right thing for Huma would be to run for a Congresswoman's position from New York in a couple of years, carrying Hillary Clinton's torch of justice and equal rights for women and immigrants in America.

While several women have become heads of State and government in the UK, Germany, Italy, Norway, Australia and other countries, the opposition to a woman becoming President in the US is very strong and visible.

It is not Hillary Clinton alone -- despite her lifelong record of political action at the national level and having held prominent positions of responsibility in the government -- who has faced opposition, other women too have confronted identical opposition when they have run for high political office.

Nancy Pelosi, the senior Democratic party leader and former Speaker of the US House of Representatives, has faced many bitter attacks from right wing Republican politicians. In 1984, when then US Congresswoman Geraldine Ferraro ran as Walter Mondale's running mate against Ronald Reagan and George H W Bush, she was lampooned, condemned and insulted.

It is a hard glass ceiling for women in the United States that they must break through. Huma Abedin must follow through in the footsteps of her illustrious mentor Hillary Clinton to carry the movement forward to empower American women.

Kaleem Kawaja, who works at NASA, is Executive Director, Association of Indian Muslims of America. 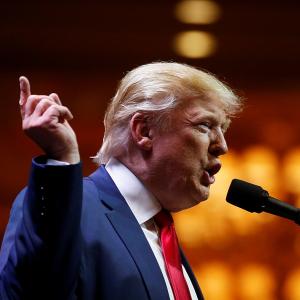 'Hillary can put Oval Office up for sale'