News
Business
Movies
Sports
Cricket
Get Ahead
Money Tips
Shopping
Sign in  |  Create a Rediffmail account
Rediff.com  » News » The battle is now for the Tipping Point in Kashmir

'Ceasefire violations continue at a much larger scale and are not to assist in infiltration alone, but have a larger game plan. They assist in deception, draw focus to the wrong areas, attempt to achieve moral ascendancy and keep the LoC in the limelight of diplomacy.'

'How do we recapture the situation to greater advantage and take it to a tipping point in our favour; this should be the challenge before India's strategic community.'

'How does one get to weaken all those pillars on which the Deep State of Pakistan and the Separatists rely to prevent the situation reaching that point; how must this stage of the proxy war be countered? In many ways the strategy being followed by the adversaries is a smart one, acting within threshold and avoiding overpitch,' says Lieutenant General Syed Ata Hasnain (retd). In 2011, the Army in Kashmir was constantly in search of answers on the nature of conflict in J&K and at what stage we were in at that time.

There are never any clear answers in long drawn out irregular conflict campaigns and if there are any they can only be ambiguous.

We were fully aware that ours would not be the cliched thought process of victory and defeat in a battle or a campaign. That approach leads to unrealistic objectives and overkill. Tackling the situation by limited objectives allows the flexibility of approach.

It was then that I read two books almost in sync with each other. The first was the well-known and much appreciated Tipping Point by Malcolm Gladwell.

The second, a much less known but perhaps even more significant book for the times -- Gene Sharp's From Dictatorship to Democracy: The Politics of Nonviolent Action. It contained an essay in the first appendix titled '198 Ways of Non Violent Revolution'. More on this, later.

We were convinced of two things. First that there is no victory against the people you count as your own, it is only a question of restoration of or winning of their confidence; that is counted as success.

The second, that in such long drawn out campaigns as the one in J&K, there will be many dynamic ups and downs; it should not paralyse our thinking when we face stagnation.

Situations at which the internal conflict could finally move in favour of either side will be reached many times; it is a question of recognising that point and working towards taking it forward to irretrievably obtain a favourable equation for yourself.

Once you have that in firm control you have to ensure that you do not hand the situation back to the adversary; in this case the Deep State of Pakistan and its collaborators. So where do these two books come into the picture. Gladwell's Tipping Point has nothing to do with conflict.

That really is the clincher; you do not need cliched approaches and well established and tried doctrines, always. Once in a while some business practices can be well applied for effect in conflict situations, as much as business leaders apply military strategy to winning their battles.

Gladwell defines a tipping point as 'the moment of critical mass, the threshold, the boiling point.' The book seeks to explain and describe the 'mysterious' sociological changes that mark everyday life. As Gladwell states, 'Ideas and products and messages and behaviours spread like viruses do.'

The one who takes the advantage is the one who innovates, sells the innovation, sticks to a line of work, enthuses the work force to labour hard and to achieve the intent by many small ideas coming together.

That is how the 'tipping point' is created in a progressive situation in which you are contesting an adversary to wrest the advantage. In other words it is not only a battle of ideas but a battle of taking those ideas forward. These ideas are the small actions which need to be joined for greater effect.

They come from Gladwell's Mavens or the information specialists who research and provide the intellectual capital. They have to be sold to the right people, the decision makers or the executors who must take ownership and feel for the task.

The identification of those right people is the task of Gladwell's Connectors and the selling has to be done by the Salesmen.

Many a time in J&K we have come to positions of impasse when we find that we have brought the situation to our advantage but are in no position to take it to the tipping point and grab the advantage which presents itself.

It is then that we get stuck in cliched understanding of whose job it is to do that. The Army, the main player in the physical conflict has often created the conditions of stability where only minor actions by terrorists are possible and the control is well in its hands but the next step is always an elusive one.

This is where the Tipping Point theory comes handy. Not everyone can understand the ground situation and appreciate the complexities and the variety of factors which are at play. Big actions are anathema and search for policy changes will always be elusive.

Through small acts in multiple domains, political, psychological and social -- the situation can be developed to reach a tipping point.

In 2010-2011 we were at one of those periods of impasse. Gene Sharp's 198 ways of non-violent revolution were working against us with the Separatists finding new ways of raising the pitch, just as they are doing so today with symbolic acts of defiance such as raising Pakistani flags.

To keep us on tenterhooks, Islamic State flags today are interspersed with these. The Deep State is not attempting big terror actions but multiple small acts combined with actions such as destruction of mobile towers, disallowing cogent inputs to our process of appreciation, attempting alternatives in infiltration patterns and spreading our ideas thin.

Someone did tell me then that Geelani's advisers had possibly read Gene Sharp and were applying them in principle. In the days of 2011, we did succeed in the battle of ideas applying the Hearts Doctrine for outreach, reducing the scale of operations to intelligence based ones, holding the LoC tightly to control infiltration and continuously offering ideas to the political leadership.

The ideas had to be equally sold within our own ranks in the Army to overcome detractors that were many. The key lay in being able to make all our actions complimentary.

I find the situation today almost akin to 2011. We have our political contours right with the two strong political parties in coalition (although yet overcoming their trust deficit), the Deep State in no position to launch large scale kinetic operations but constantly pricking us with small scale actions.

The Army's counter infiltration grid is tighter than ever before thanks to some deft redeployment. It is being challenged with alternative routes and sectors for infiltration, including Jammu's IB sector.

Ceasefire violations, however, continue at a much larger scale and are not to assist in infiltration alone but have a larger game plan. They assist in deception, draw focus to the wrong areas, attempt to achieve moral ascendancy and keep the LoC in the limelight of diplomacy.

How do we recapture the situation to greater advantage and take it to a tipping point in our favour; this should be the challenge before India's strategic community.

In other words how does one get to weaken all those pillars on which the Deep State and the Separatists rely to prevent the situation reaching that point; how must this stage of the proxy war be countered? In many ways the strategy being followed by the adversaries is a smart one, acting within threshold and avoiding overpitch.

In emotional terms this may not entirely be true because as a nation the adversaries can see that India is getting exasperated by what it has been suffering for twenty five years. Yet strategically it is just sufficient to keep the simmer alive, while contextually more important things are tackled within Pakistan and in Afghanistan.

We have kinetic options but it is not necessary that these will get dividends beyond the tactical need of satisfying public ego against Pakistan. The solution appears to lie in countering all those conditions which assist the proxy war although there are enough paradoxes within that approach too.

For example, the Kashmiri demand for removal of AFSPA may appease the public but plays against the effectiveness of the security grid which has achieved much and enabled the current situation.

There is a need for outreach to the youth which is not easy given the experience of the young generation with conflict through their conscious years. So, while there may be obstacles in the path at every juncture it will be the ability to work through these that will count.

Course corrections will be required all along with close monitoring and continuity. Perhaps the government should consider such a monitoring and reference group which can relieve it off the task of constant monitoring and analysis.

No doubt intelligence agencies do this, but the scope of the J&K internal proxy war is beyond the ordinary understanding of conflict; there is a need to incorporate social, cultural, gender, ideological and economic issues as a part of the discourse to obtain a larger view for the government and its higher political authorities.

Although our security organisations have done a commendable job in containing conflict, time has come for India's adversaries to feel the effect of its comprehensive capability to secure itself.

To do that, we need to work towards going beyond the tipping point towards eventual success in conflict termination.

Lieutenant General Syed Ata Hasnain (retd) is a former General Officer Commanding of the Srinagar-based 15 Corps. The general is now associated with the Vivekananda International Foundation and the Delhi Policy Group.

IMAGE: Security personnel after an encounter with terrorists at a Jammu police station in March. Photograph: PTI 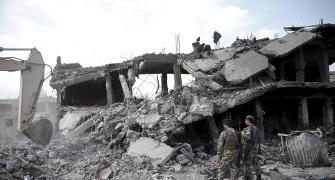 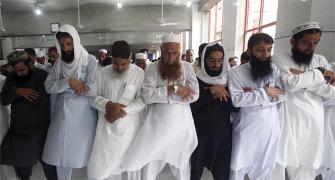