'Public spirited individuals and organisations should commemorate May 10 as Kashmir Solidarity Day by taking out candlelight marches and gathering at war memorials all over the country.'
'The occasion is not just to remember Lieutenant Fayaz, but also all those who have lost their lives in Kashmir defending the Republic,' says Colonel Anil A Athale (retd). 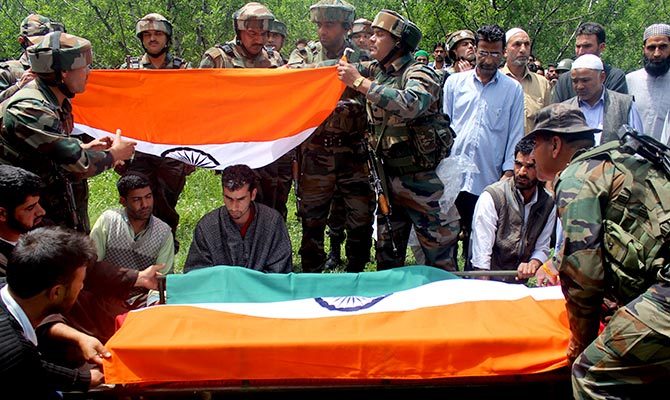 IMAGE: The tricolour draped on Lieutenant Umar Fayaz's coffin at his funeral, May 10, 2017. Photograph: Umar Ganie for Rediff.com

On May 9, 2017, almost a year ago, a 22-year-old young lieutenant of the Indian Army was abducted from his home in the Kashmir valley, where he had gone to attend a family wedding.

The next day his bullet-ridden body was found in an isolated area in Shopian district, South Kashmir.

Lieutenant Umar Fayaz was an alumnus of the National Defence Academy, my alma mater.

The NDA where the youth of India train to join the armed forces is a unique institution. Having been through it, I can vouch for the fact that an NDA cadet is immune to divisions on the basis of caste, creed or origin.

In the academy, a son of an erstwhile maharaja was treated no differently than a son of a humble jawan. In fact, some of those sons of humble jawans have gone on to the very pinnacle and become the service Chief.

Lieutenant Fayaz was also an alumnus of the famed Jawaharlal Nehru University, since the NDA is affiliated with JNU.

Chances are that JNU students -- hyperactive on issues of human rights -- will be silent on the first anniversary of Lieutenant Fayaz's death.

There will be no candlelight marches or fiery speeches at JNU.

Neither will there be any bandh in the Kashmir valley.

Lieutenant Fayaz's sacrifice -- as that of over 7,000 soldiers -- will be forgotten by the 'politically correct' activists.

For them, only some lives matter. In Orwellian terms, 'All animals are equal, but some are more equal than the others.'

Contrast this with the hullaballoo over the death of Burhan Wani, a gun-wielding militant who was killed in a firefight with the Indian Army.

Wani was killed in a fair fight. Armed to the teeth with an AK-47 rifle, Wani was killed when he refused to surrender and instead opened fire on the soldiers.

In contrast, Lieutenant Fayaz was unarmed and off duty, merely attending a wedding.

His was a cold blooded murder while Wani's was an unfortunate death in a conflict zone.

Nothing exposes the double standards of the pseudo liberals than this differing treatment of two tragedies.

For the pseudo liberals, Lieutenant Fayaz was a member of the oppressive State apparatus while for the equally pseudo nationalists, he belonged to the wrong religion.

Ignoring Lieutenant Fayaz's sacrifice and martyrdom is symptomatic of what is wrong with our so-called left-leaning liberals. A soldier risking his life in Kashmir often wonders whose battle he is fighting when he sees the demonisation of soldiers in the media.

Television is essentially a narrow focus visual media that never gives you the broader picture. Thus unrest in a mere four districts of the Kashmir valley is propagated as the whole of J&K being on fire.

One of the most important aspects of insurgency is perception management.

Since the Indian media itself projects a one sided image, it strengthens the perception in Pakistan that they have a 'legitimate' right to support the Kashmir revolt.

Within the armed forces, it lowers their morale and within Kashmir, it creates more recruits for the armed militancy.

A public display by ordinary citizens of support for the armed forces and remembering Lieutenant Fayaz is an effective antidote to the Pakistani propaganda.

Many liberals who support Kashmiri separatism fail to appreciate the fact that an independent Kashmir of that kind will be a replica of Talibanised Afghanistan.

Public spirited individuals and organisations should commemorate May 10 as Kashmir Solidarity Day by taking out candlelight marches and gathering at war memorials all over the country.

The occasion is not just to remember Lieutenant Fayaz, but also all those who have lost their lives in Kashmir defending the Republic.

Colonel Anil A Athale (retd), a military historian, has been studying the Kashmir conflict for the last 30 years.