News
Business
Movies
Sports
Cricket
Get Ahead
Money Tips
Shopping
Sign in  |  Create a Rediffmail account
Rediff.com  » News » Modi is beatable in 2019, and may well be beaten

'The simple truth is this: That we had come to assume that a second term was Modi's for the asking. But the fact is that Modi will have to win one, just like everybody else.'
'And so much has he invested in his strongman persona that even a loss of just 50 seats from his extraordinary 282 in 2014 will look to his potential allies and to his party like a defeat,' says Mihir S Sharma. 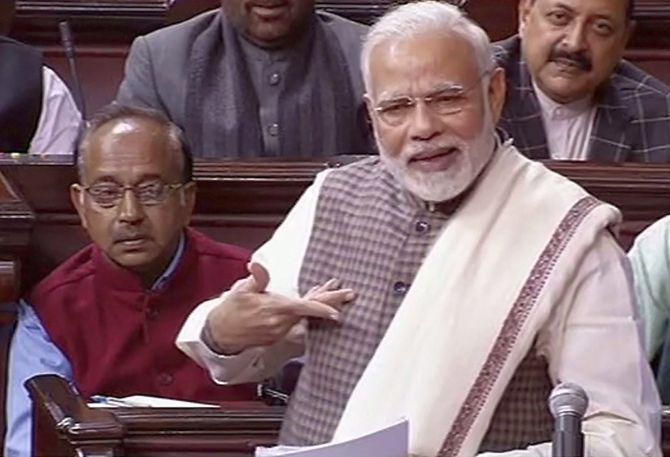 IMAGE: Prime Minister Narendra D Modi during his speech in Parliament, February 7, 2018, where he tore into the Congress and its leadership -- from Nehru to Rahul Gandhi. A speech that was seen as the first shot fired in the 2019 election campaign.

On Budget Day, it's difficult to think about any news other than the Union Budget.

Especially in the past decade, as the Budget has become simultaneously less powerful and less clear, when major changes in orientation or policy stance can be buried in appendices or annexures or amendments tacked on the Finance Bill, it feels like the Budget should claim all our attention for a week.

But two other pieces of news on Budget Day should claim our attention -- for what they say about the pressures that go into the Budget, as well as reasons why the Budget might well struggle to achieve its stated ends.

The first was the results of the by-elections in Rajasthan.

The swing against the BJP is sizeable -- no, in fact it is massive.

There was a 19 per cent swing against the BJP in Alwar constituency.

It is dangerous to extrapolate from any one seat to the rest of the North; and from by-elections to regular elections. But the margins were so vast that it suggests that for the first time, Modi's BJP is beatable even by the Congress and not by strong third party leaders.

After Gujarat, Modi's cloak of invulnerability had holes in it. After Alwar and Ajmer, it lies in tatters.

The simple truth is this: That we had come to assume that a second term was Modi's for the asking. But the fact is that Modi will have to win one, just like everybody else.

And so much has he invested in his strongman persona that even a loss of just 50 seats from his extraordinary 282 in 2014 will look to his potential allies and to his party like a defeat.

Today, it looks entirely possible that he will in fact lose more than 50, because he can no longer take for granted a wipeout of the Congress in areas that the two national parties are in contention with each other.

Modi is beatable, and in fact he might well be beaten.

This knowledge, when it percolates through New Delhi and the rest of India, will cause his administration to look less sure of itself, will cause bureaucrats and businessmen to be less slavish. It becomes almost a self-fulfilling prophecy.

I am sure that Modi and Amit A Shah knew this fact long ago. In fact I suspect they knew it long before any one of us did.

And it is likely that it is this vulnerability that lies behind how the Budget was presented.

We expected a 'rural' Budget, one that exercised that long shadow of Atal Bihari Vajpayee's 'India Shining' defeat in 2004.

And we got a Budget that is being sold as one that is farm-focused, although the actual policy details and allocations simply don't match the rhetoric.

What matters, however, is that it is a Budget that reveals how shaky this government feels.

That the first majority government in three decades, one that was gifted wonderful macro tailwinds, presents Budgets that reflect such political and economic stress, tells its own story of incompetence.

In order to make up political ground, the government has turned to the only succour it can understand: The State.

It has relied to achieve its supposed goals on infrastructure building, on State-owned companies, on public sector banks, on nationalised insurers, on medical regulators.

But the other piece of news that came in on Budget Day shows how great a mistake this might be. Speaking about the revenue estimations that underlie his fiscal planning, Finance Minister Arun Jaitley pointed to the fact that 'anti-evasion' mechanisms related to the Goods and Services Tax would kick in from February 1 as a sign that the revenue position going forward would be comfortable.

But what else happened on the same day? Well, the digital infrastructure -- built by the National Informatics Centre or NIC -- that is supposed to underlie the creation and checking of electronic waybills for transport of goods across state lines, or e-way bills, simply collapsed.

This was the first of the anti-evasion systems Jaitley had touted.

In response to the complete failure of the Web site, the Central Board of Excise and Customs tweeted that the bills would instead be applicable 'from a date to be notified'.

This is a reminder that effective and supportive State infrastructure and capacity is essential for even a small fraction of the government's big promises, in this Budget and earlier, to be brought to fruition.

But the government has shown an inability to reform itself, a prerequisite to transforming India in the manner Modi has promised.

Together, these pieces of news -- showing respectively the government's political fragility and its limited vision and implementation capability -- set the benchmark by which we should judge the Budget's intentions and its promises.

Given this context, the Budget appears even less persuasive than it did before.