News
Business
Movies
Sports
Cricket
Get Ahead
Money Tips
Shopping
Sign in  |  Create a Rediffmail account
Rediff.com  » News » It's not a Hindu vs Muslim conflict in Assam, but Indians vs foreigners

It's not a Hindu vs Muslim conflict in Assam, but Indians vs foreigners

By Sudheendra Kulkarni
July 27, 2012 15:49 IST
Assam's plight has originated in the fact that the Congress party, for its shortsighted political considerations, has refused to acknowledge that infiltrators are foreigners, says Sudheendra Kulkarni

It's a deadly and unending tale of two floods that Assam has been battling. And it's losing the battle on both fronts.

The month of July began by thrusting Assam into national and international news headlines by informing us that floods in the mighty Brahmaputra river and its tributaries had killed nearly 80 people and affected nearly two million people in the state. Prime Minister Dr Manmohan Singh, who conducted the ritual of an aerial survey of the flood-hit areas, told reporters in Guwahati, 'People of Assam are facing one of the worst floods in recent times.'

July ended with Assam once again in the news. The prime minister is to visit Assam again July 28 in response to yet another disaster, this one caused by a flood of a different kind -- the flood of Bangladeshi infiltrators into the state.

At press time, nearly 50 people had been killed and over 200,000 people have been rendered homeless in prolonged communal-ethnic violence in and around Kokrajhar district. Violent clashes have broken out between native Bodos and illegal Muslim migrants from Bangladesh. The root cause of this violence is the joint failure of the federal and Assam state governments to stop wave after wave of Bangladeshis from swarming into different parts of Assam and drastically changing the state's demographic profile, especially of the districts close to the border. In Bodo-populated areas, this 'flood' has caused large-scale usurpation of tribal lands and made Bodos feel fearful that they are being marginalised in their own land.

There is a well-known word for it -- ethnic cleansing.

What is happening in Assam, and it has been happening for decades now, is ethnic and religious cleansing caused by this massive human flood.

This is the stark truth. And Dr Singh knows it very well. After all, he is India's prime minister. He gets regular reports on what is happening in the state from the governor, the Intelligence Bureau and other official sources. And these sources, as we shall see, don't lie. Dr Singh has also been a member of Parliament from Assam -- as a representative in the Rajya Sabha, the upper House -- for the past 22 years. At press time he was yet to go, but one can be certain that Dr Singh, in Assam, will not utter a word recognising the disturbing truth about this second kind of flood.

It's easy to blame Assam Chief Minister Tarun Gogoi for inaction. No doubt, he and his government have a lot to answer for, especially since there was ample evidence about tension building up in the Bodo-populated areas for the past several months. But a far greater part of the blame lies at the doorsteps of the prime minister and the Congress party president. Both the Congress party and the United Progressive Alliance government it leads have been indulging in a game of denial and falsification when it comes to infiltration of Bangladeshis into Assam and other states of India.

Here are a few facts: July 15, 2004, Sriprakash Jaiswal, minister of state for home affairs in the UPA government, said in the Rajya Sabha: '1,20,53,950 illegal Bangladeshi migrants were residing in 17 states and Union territories as on December 31, 2001.' He also said that five million Bangladeshis were living in Assam. Dr Singh happened to visit Guwahati the following day. He was confronted by the state's Congress party leaders who were concerned that Jaiswal's reply in Parliament could affect the party's prospects in the 2006 state elections in Assam. They asked the prime minister that the official statement be retracted. Dr Singh succumbed to pressure and publicly stated that he doubted the authenticity of the information provided by his own junior minister. A week later, Jaiswal told Parliament that the information that he had provided about Bangladeshi infiltrators 'is unreliable and based on hearsay'!

Jaiswal was not the first to do this shameful about-turn under the pressure of vote-bank politics. April 10, 1992, Assam's then chief minister, Hiteswar Saikia, stated in the legislative assembly that there were 'between two and three million' Bangladeshi infiltrators in Assam. He was only stating the obvious. This met with intense anger from the Muslim Forum in Assam. The Forum's head, Abdul Muhib Mazumdar, a Congress party man, reminded the chief minister that the Congress party's survival in power depended on 'Muslim votes' and warned that it would take 'just five minutes for the Muslims of Assam to throw your government out'. Saikia soon declared there was not a single illegal migrant in the state.

One can give numerous instances of warnings sounded by people in authority. In 1996, TV Rajeshwar, a former director of the IB who was later made the governor of Uttar Pradesh by the UPA government, had warned, through a series of newspaper articles, that unchecked illegal immigration from Bangladesh into Assam and other border states in India's northeast 'could someday lead to a third division of India'. When he was governor of Assam, retired General SK Sinha had also cautioned about grave consequences for India's unity and security if the problem of Bangladeshi infiltration is not tackled firmly.

The warning has also come from the judiciary. The Guwahati high court in 2008 heard a case relating to a Pakistani national who came to Bangladesh, then infiltrated into Assam, got his name registered on the voters' list and even managed to contest the 1996 assembly elections. Observing in despair that "this can happen only in Assam", the court noted that "illegal Bangladeshi immigrants are slowly becoming the 'king makers' in Assam and will reduce indigenous Assamese to a minority...."

The warning sounded by India's Supreme Court has been even direr. The prolonged agitation of the Assamese people against infiltration from Bangladesh -- and earlier from East Pakistan -- culminated in the Assam Accord of 1985. The Rajiv Gandhi government enacted the Illegal Migrants (Determination through Tribunal) Act. The Assam Accord was hailed as one of the great achievement of Rajiv Gandhi's premiership. The IMDT Act turned out to be a cure worse than the disease. Far from checking the infiltration of Bangladeshis, it gave it a boost.

This happened because the Rajiv Gandhi government had deliberately introduced certain flaws into the act that enabled infiltration to continue. Neither the Congress party nor any of the self-styled secular parties were subsequently willing to remove these flaws. After a prolonged legal battle by anti-foreigner forces in Assam, the Supreme Court, in its July 2005 verdict, struck down the IMDT Act as 'unconstitutional' and urged the federal government to take effective steps to stop the influx of Bangladeshis. The Supreme Court warned that large-scale infiltration from Bangladesh constituted 'external aggression' against Assam.

In the past seven years since the Supreme Court's ruling, the UPA government has done nothing to 'take effective steps' to check the influx of Bangladeshis. Considerations of vote-bank politics have triumphed over the Congress party's weakening concern for India's unity and integrity.

The problem that Assam is confronted with is not a Hindu versus Muslim conflict; it is an Indian nationals versus foreigners conflict. Native Muslims in Assam have, and should have, the same rights as native Hindus. However, foreigners who infiltrate into Assam -- or other parts of India -- cannot claim to have the same rights as Indians. Assam's plight has originated in the fact that the Congress party, for its shortsighted political considerations, has refused to acknowledge that infiltrators are foreigners.

Bhupen Hazarika, Assam's greatest cultural icon who passed away last year, had expressed his people's anguish in a lyric he composed way back in 1968: 'Today's Assamese must save themselves or else they will become refugees in their own land'.

Today, in 2012, Assam is finding itself in a far more helpless situation. The violence in the Bodo areas is an expression of this helplessness.

Violence of any kind, and targeted against anybody, is condemnable. Every human life is precious, and snuffing out any human life is a crime. But why is the Congress party silent on the ongoing demographic invasion of India, threatening our nation's unity and integrity, in the form of the never-ending influx of foreigners into our country?

Sudheendra Kulkarni is a member of the Bharatiya Janata Party's National Executive. He can be reached at sudheenkulkarni@gmail.com
Sudheendra Kulkarni
SHARE THIS STORY
Print this article
Assam conflict was badly handled: G K Pillai
Mistrust between communities cause for violence in Assam 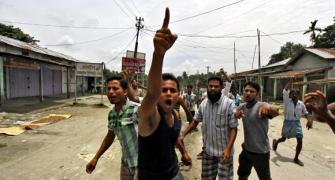 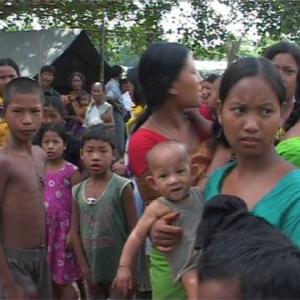 'Everyone for redeployment of army in riot-hit Assam'