News
Business
Movies
Sports
Cricket
Get Ahead
Money Tips
Shopping
Sign in  |  Create a Rediffmail account
Rediff.com  » News » Is the son not being allowed to rise in DMK?

As the Opposition leader in the state assembly, M K Stalin has to fend off the ruling AIADMK on the one hand and prevent the re-emergence of a non-Dravidian Opposition on the other -- but his immediate challenge comes from within, in the form of his wheelchair-bound octogenarian party leader and father M Karunanidhi, says N Sathiya Moorthy. 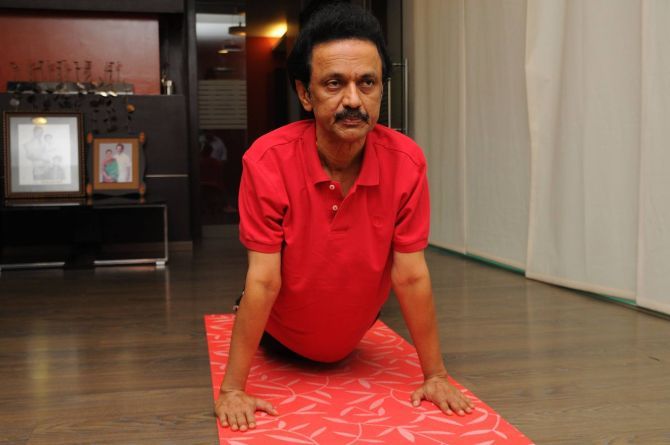 Despite managing the party’s historic yet losing assembly poll campaign effectively and efficiently over the past year and more, Dravida Munnetra Kazhagam treasurer M K Stalin is stuck. He needs to continue firing on all fronts and from all guns without any let-up, to keep the DMK relevant in state politics and himself relevant in DMK politics. Just now, he is doing precisely that -- but how far he can hold on remains to be seen.

Stalin has the best example in such a fight-back inside the DMK’s ‘first family’. Party president and Stalin’s father, M Karunanidhi, is among the nation’s greatest fight-back veterans in politics and elections.

The DMK and Karunanidhi had to sit through 10 year-long vanvas when the late M G Ramachandran or MGR was ruling the roost, from 1977 till his death in 1987.

Add to that the two innings of President’s rule in the state, before and after MGR’s time as chief minister, and the figure adds up to the period that the Pandavas in the Mahabharat had spent away in the forests and later living incognito for a year.

It was a Hindu mythological story, Karunanidhi used to never tire of repeating at the time -- mythology that the ‘rationalist’ (atheist) pan-Tamil, Dravidian icon has mastered as any strong believer and votary of religion and its scriptures, but for the exactly opposite reasons.

Then, as now, the credit for keeping the DMK flag flying through that period should go to Stalin -- even as Karunanidhi continued to be the all-time favourite target of socio-political critics on issues such as corruption and good governance, as also alleged lawlessness with him as chief minister.

The criticism of ‘family rule’ too had begun then itself, over 40 years ago, and Stalin, and his late cousin ‘Murasoli’ Maran were at the receiving-end. But for most parts, by maintaining a relative low profile, both had drawn no personal attention of any kind towards them.

In the absence of social media of the present-day kind, motivated rumour-mongering too died its natural death. It’s not the case today when it comes to Stalin’s siblings, older brother Mu Ka Azhagiri and half-sister Kanimozhi.

Nor is it so when it comes to his nephews in the Marans Jr, who own a large media conglomerate -- and manage to be making news, too, often for the wrong reasons.

The latest to join the list is Stalin’s immediate family, including wife Durga and son-in-law Sabareesan, who is known to have headed the personalised DMK campaign and poll-management team for Stalin this time round.

That the unconventional campaign, using non-traditional means of communication for a propaganda-driven party from a hoary past, the team had done well ever since conceptualising the ‘Namakku Naamaey’ (‘We, for ourselves’, meaning the voter and the cadre, as distinct from the government and the ruling AIADMK of the time) walkathon for Stalin to live down the party’s past image.

It is this approach that seemed to have paid electoral dividends. Under Stalin, the DMK has emerged as the strongest Opposition ever in the state assembly.

It is a feat that even Karunanidhi could not master against the AIADMK, either under MGR or successor, Chief Minister Jayalalithaa.

Yet, Team Sabareesan could well be called for questioning inside party circles and fora, for whatever is seen as having gone wrong with the DMK’s candidate selection, campaign style and what not.

When, where and how it begins -- and how Stalin handles it will remain to be seen.

For now, however, Stalin is caught in a personal political miasma, not of his making or that of the voter. Octogenarian Karunanidhi does not seem to be in a mood to direct the party focus away from self and on to Stalin, whom he himself had indicated as heir-apparent -- but remains just as much.

The fact remains that the new generation TN voter is looking for change, both in ideological terms and in terms of a proactive political and physical approach. Across the board, Stalin alone had sort of fitted the bill.

First, by not declaring Stalin as CM candidate, and later asserting that he alone would be the chief minister if the DMK combine won -- that too just a couple of days before the May 16 polling -- Karunanidhi might have lost the decisive section of undecided / non-party voters away from the party, or possibly even the polling centres.

Karunanidhi also added to party woes by having former Union minister Dayanidhi Maran by his side on almost all campaign platforms, when he had come to be identified with the pending 2G and Aircel-Maxis cases.

Kanimozhi -- who had spent time in Delhi’s Tihar jail before being enlarged on bail -- was another of the 2G accused facing a court verdict, who was seen campaigning vigorously for the party.

Some party candidates were seen as her nominees -- and thus carried the ‘2G tag’ to the voter-level, at least in those select constituencies.

Post-poll, reading the mood of the present-day voter generation, Stalin sounds matured and conciliatory for an Opposition politician. He gracefully accepted the final tally, and said so even in the inaugural session of the 15th assembly.

With 98 MLAs in the DMK-Congress coalition in a house of 234, Stalin, in his early reaction, said, “It’s neither a re-energising victory for the AIADMK, nor is it a humiliating defeat for the DMK.” He continues to maintain the stride and approach to politics, both within and outside the assembly.

However, despite the promise to the contrary by Jayalalithaa on the floor of the House, the AIADMK legislators, ministers and leadership too have to acknowledge the changed scenario inside the house -- where there are is no ‘third player’, either to draw support from, or deflect attention from (the DMK rival in this case).

From outside the assembly, Karunanidhi continues to fire one salvo after another against Jayalalithaa and the state government, as if to draw back the Opposition-centric part of the media focus to the self -- and self alone.

Not a day has passed since Jaya’s return to power that Karunanidhi has not taunted her with one statement after another, the contents drawing from his prodigious memory for facts, figures and sequences.

Not to be taken off-guard, the ruling party, personally led by the CM on most occasions, has turned the tables on the DMK and its leader.

With numbers adding up more for the ruling party and re-elected assembly speaker Dhanapal too using his powers and discretion, the DMK ends up being seen at the receiving end of an unhealthy argument, which is triggered (from) outside and which the new generation voter is tired of.

The recent debates over the Sri Lankan fishermen’s row and the even more controversial ‘Katchchativu’, both based in the past, are only examples.

The past days of assembly discussions have not focussed much on contemporary issues of personal concern to individual voters – be it price rise, job-creation or tariff for public utilities, and the like.

As the Opposition, the DMK cannot be expected to hail Jayalalithaa for seeking to fulfil her pre-poll promises of prohibition-in-phases, by shutting down 500 liquor shops to begin with.

Be it inside or outside the house, constructive criticism of whatever kind to the implementation of the prohibition policy continues to come from the so-called pulp media, and not the DMK, the rightful Opposition.

Instead, the party is caught up with a non-existent row over wheelchair bound Karunanidhi, who throughout the past had mostly stayed away from the house whenever the DMK had been in the Opposition.

In the post-Rajiv Gandhi assassination polls of 1991, Karunanidhi was only one of the two DMK winners -- Stalin too had lost -- but resigned his seat promptly, without attending the assembly even once, and letting the other to fight a lone battle.

Karunanidhi’s presence, however drowned in the combined voices of the ruling AIADMK and its Congress electoral ally, would have made a difference to the discourse then, but he seemed to have chickened out, against the numbers.

Today, Karunanidhi seems wanting to spend more time in the assembly, and also wants special arrangements made for his wheelchair to be parked in position.

Whatever the protocol and procedure in the matter, Speaker Dhanapal may not have added to the glory of the house by allotting a second-row seat to the five-term former chief minister.

It’s another matter that as leader of the opposition, Stalin would be seated in the front row.

The message thus is that Karunanidhi was as much peeved at not being allotted a front row seat, as his having to sit a row behind son Stalin.

In all this, the only solace that Stalin has just now is this. No one, inside the party or outside, is talking about Azhagiri, one-time ‘southern trouble-shooter’ for the party and eternal trouble-maker, as far as the Stalin camp is concerned.

But it cannot be said of the non-Dravidian Opposition, which is down and out post-poll. It’s the electoral space that the DMK under Stalin subsumed this time, but has to be kept that way, if the party had to take a fresh shot at power five years hence. In politically divided Tamil Nadu, a tiny sign of change 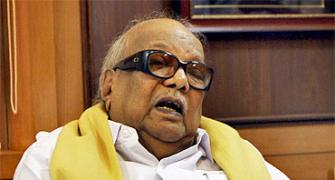 Karunanidhi all but anoints Stalin his successor 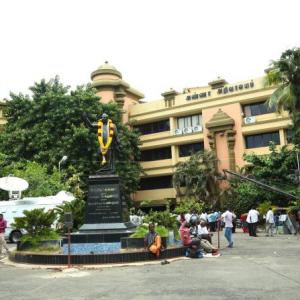 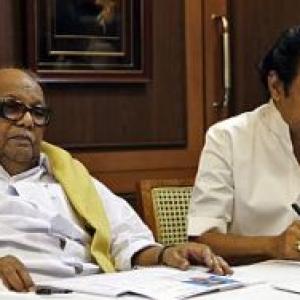