News
Business
Movies
Sports
Cricket
Get Ahead
Money Tips
Shopping
Sign in  |  Create a Rediffmail account
Rediff.com  » News » How the 'outsider' factor led US to the Trump conundrum

How the 'outsider' factor led US to the Trump conundrum

The politics of the world’s oldest democracy has seen outsiders making it big, a move that is not necessarily a positive omen. Shreekant Sambrani laments the state of play that has besieged the American polity. 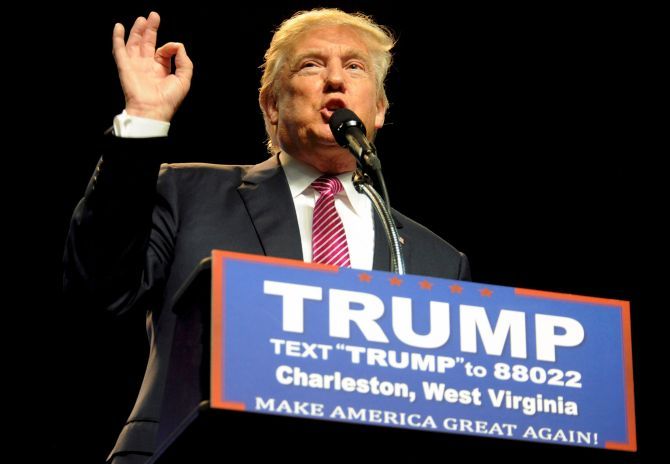 ‘He came with his own China shop’ was how a thoughtful insider of the Morarji Desai government described Raj Narain, who humbled Indira Gandhi first in courts in 1975 and later at the hustings in 1977.

He might as well be describing Donald Trump, who this week became the Republican nominee-presumptive in this year's election to the presidency of the United States.

The self-proclaimed (more than self-made) New York billionaire has been around the fringes of the American political scene for nearly two decades, but he took the big plunge into presidential sweepstakes last June.

The politics of the second largest democracy of the world has seen some outsiders making it big: Charles Lindbergh, the aviation-pioneer turned Fascist sympathiser; General Curtis LeMay, the decorated war-hero who was the vice-presidential candidate for the Alabama racist George Wallace in 1968; H Ross Perot, the computer billionaire who contested the election as a third-party Conservative in 1992; and Ronald Reagan, the B-grade Hollywood star who became a very popular president (1981-89).

But even in this gallery of mavericks, Trump is the odd man out for many reasons.

Trump is the first nominee of a major party in over a century to have no experience whatsoever of any political, administrative or military office.

Even Reagan had been governor of California for eight years prior to running for president.

Trump also seems to have weathered the intense media and public opinion scrutiny which increasingly ensures that only the straight arrows with the most wholesome personal lives survive.

To say that the Trump copybook is smudged would be an understatement of epic proportions.

He has never fully and convincingly disclosed his financial positions, often shifting from one figure to another, ignoring recently the exhortation to come clean from Mitt Romney, the Republican standard-bearer in 2012.

He began his career with inheritance both of enterprise and money from his father. He was complicit in hiding his father's German origins. His businesses have had numerous cases and citations and prosecutions resulting in fines and injunctions. His enterprises have resorted to bankruptcy more than once.

On a personal front, Trump is a self-confessed Casanova. His three marriages and many dalliances are part of the folklore that surrounds him. He has claimed that his book of all his liaisons would be a runaway bestseller.

Gary Hart and John Edwards lost their otherwise credible careers because of private transgressions of a far lesser nature than the Trump peccadilloes. Bill Clinton's similar escapades nearly derailed him, but Trump seems to be Teflon-coated.

He ran the most vicious and evil campaign in recent memory. He abused his rivals in and out of the party in choice words, came across as a racist and misogynist, anti-immigrant, protectionist and above all, a most ignorant candidate, who did not even know his Bible, a cardinal sin in American campaigns.

Yet he has risen to the top of his party, the opposition of such heavyweights as Paul Ryan, the House Speaker and the ranking Republican in WashingtonDC, or the father-son former Presidents Bush and Romney notwithstanding. And he may yet have a serious shot at the White House in November.

That is because Americans now are apparently so deeply disillusioned with politics as usual that they seem to be saying pox on all your houses to all establishment figures.

The Tea Party and Occupy Wall Street movements were precursors to the emergence of a totally politically-incorrect Republican nominee and a woolly-headed atavistic Senator Bernie Sanders who at 74 has ensured that despite his utter lack of charisma, the one-time Democratic shoo-in Hillary Clinton has to fight every inch for her nomination.

Her own indiscretions have added to the inherited stigmata of the Clinton era, making her an easy target for the entire anti-establishment sentiment. So there could be a chance of an upset in the likely Clinton-Trump duel later this year.

A possible Trump presidency is fraught with unmitigated disaster for the whole world.

The man with his finger on the button of the largest nuclear arsenal in the world could well be provoked into pressing it by a rogue North Korea or a smarting Iran.

Trade and economic wars with China (Trump accuses it of ‘raping’ he US, unmindful of the fact that it is also the largest holder of the $20-trillion -- roughly Rs 13,23,27,000 crores -- US public debt) could further weaken the already-stressed global economy.

Germany, Japan and South Korea would not be exactly pleased to hear themselves described as ‘subsidised’ by the United States.

Vladimir Putin of Russia has sounded positive on Trump, which sentiment appears to be reciprocated, but that would be hardly comforting to the world.

An old friend, an American of Indian origin and an astute observer of its politics, called Trump a ‘political terrorist’. We in India would be well advised to heed those words. 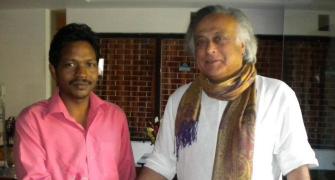