News
Business
Movies
Sports
Cricket
Get Ahead
Money Tips
Shopping
Sign in  |  Create a Rediffmail account
Rediff.com  » News » How the BJP has outwitted the Congress There are two national political parties in India, but only one of them seems to be any good at politics, says Mihir S Sharma.

The Bharatiya Janata Party seems to be playing in a completely different league than the Congress. The BJP is in the Premiership, while the Congress is playing in the fourth division, with the air of a team in danger of further relegation.

Consider the whole 'nationalism' thing. Remember how the BJP's assault on speech in campuses first hit the headlines?

With the tragic death of Rohith Vemula. That, for the BJP, was politically disastrous: Aspirational young Dalit men were precisely whom they had to woo over if Hindutva was to grow, and Uttar Pradesh -- for example -- was to be won.

How has it ended? With Kanhaiya Kumar as a focus of mockery and disdain for large parts of the middle class, while the human resource development ministry can go right on making India's university campuses safe for the ABVP, and only the ABVP.

This reframing of the debate away from the BJP's exclusionary politics to the 'anti-national,' 'hypocrisy' and 'sloganeering' of everyone else is a magnificent piece of work when examined objectively.

And the BJP knows how to keep the 'anti-national' debate at a slow simmer, too -- making Urdu writers sign a pledge that they will be suitably nationalistic in their writing, for example.

Or take the crucial and urgent issue of whether Bhagat Singh, dead many decades, was a 'revolutionary terrorist,' as he has been referred to in the history books for decades. Even if Gandhi said of Bhagat Singh, shortly after his execution, that he 'sought justice through murder,' in 2016 'terrorist' is widely known to be a synonym for 'Muslim,' and so you can't possibly use the word about anyone else.

(Note: Bhagat Singh & Co were called revolutionary terrorists even by their fellow travellers on the Left, to indicate that they committed individual acts of violence in the service of the revolution, as opposed to serving the party; a direction that Bhagat Singh himself was perhaps moving away from when he was executed.)

Anyway, these are important questions of historicity that various academics should ask; but, of course, it is far better for all concerned if Anurag Thakur of the BJP makes an issue of it in the Rajya Sabha, which has no other pressing business.

Certainly, if Bhagat Singh's posthumous betrayal has been picked up as the Burning Issue of the Day by Chief Justice, Jury Foreman and Lord High Executioner Arnab Goswami -- an erudite and measured historian if ever there was one -- then you know the BJP is on the right track.

Indeed, the BJP's political brilliance extends to completely undermining the Rajya Sabha, too.

Clearly and understandably fed up by the Congress' blatant arrogance about its (soon to be diluted) numerical advantage in the Rajya Sabha, the BJP has effectively ensured that no work will get done in it and the Congress will continue to be blamed for it.

It has achieved this feat through a single act: The nomination of Subramanian Swamy to the Upper House. Swamy is guaranteed to say something unspeakable, get everyone riled up, and further bring the obstructive Rajya Sabha into disrepute.

All to the good, given that the BJP is currently seeking to justify Constitutional and extra-Constitutional ways of bypassing the Rajya Sabha.

Swamy started as he intended to continue, by having his comments expunged twice on his first two days; one memorable passage of arms ended with him bellowing 'ISI, ISI' at the Congress benches. All those who know and love Swamy on Twitter, or have seen his delightful exchanges -- 'Liar! Liar!' -- with Field Marshal Professor Doctor Arnab Goswami (which have inspired a dozen amateur dubstep remixes) know they can cancel their Netflix subscription, because the Rajya Sabha is now all the entertainment you need.

Swamy's first intervention, of course, was on the subject of the AgustaWestland VVIP helicopter deal, investigation into which has recently been reopened. Here, too, I wish you to pause to admire the heroic edifice of supposition that the BJP has built and presented to us.

An appeals court in Milan has overturned a lower court's judgment that there was no corruption in the deal; the Milan court says that it appears that relatives of a former head of the Indian Air Force were paid off. In passing, the evidence mentions that Sonia Gandhi was pushing for a replacement of the existing VVIP helicopters -- if not, according to the court, favouring AgustaWestland as a replacement.

But you don't need even a speck of a smidgen of a hint that even one of those unlikely events transpired! No, if you're the BJP, all you need to do is say 'Sonia and Manmohan named by Italian court and you're done. 'Named'! Amazing.

It's like saying every time Swamy is referred to (exasperatedly) by the Supreme Court in some corruption-related case, that 'Swamy has been named by the SC in corruption case.' Brilliant semantic slide, isn't it?

When the party of Manu outwits the party of Macaulay even in the misuse of English, you know exactly which one deserves to be in the business, and which doesn't. 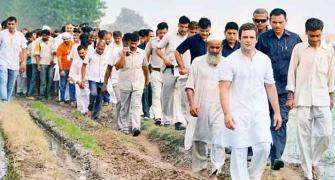 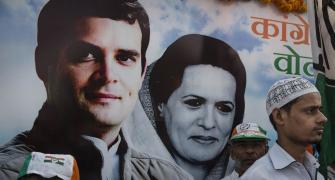 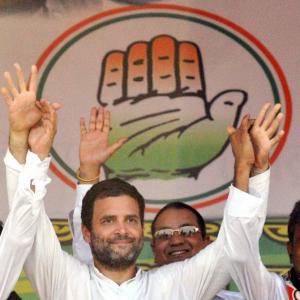 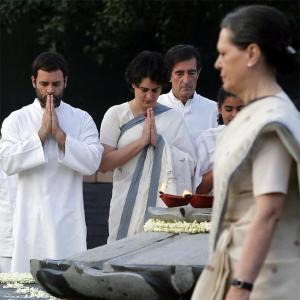