How Did TN BJP Chief Own A Rafale Watch?

If Tamil Nadu BJP President K Annamalai bought it in 2015, did he get prior approval from the Union home ministry, and did he include it in his annual wealth returns, sections of the media want to know.
N Sathiya Moorthy on the curious case of the 'Rafale' watch. On the face of it, the ruling DMK's current attack on Tamil Nadu BJP President Kuppusamy Annamalai looks like a tit-for-tat attack that seeks to diminish his credibility and standing as God's own anti-graft crusader in 'Dravidian' Tamil Nadu.

But there is more to the state's eternally-controversial electricity and excise minister V Senthil Balaji triggering the running controversy about the cost and source of the wrist-watch that innocuously sits on the lower arm of the former Karnataka cadre IPS officer, and which he swears that only death can part him from.

It is interesting to note that Senthil Balaji had held the same portfolios under rival AIADMK chief minister Jayalalithaa, implying that his administrative prowess, or connections, or both would help the DMK government as well.

He opened the continuing tirade against Annamalai, who has been targeting DMK ministers and Chief Minister M K Stalin's son-in-law V Sabaraeesan for alleged corruption and favouritism.

Lately, he has included Stalin's politician-son Udhayanidhi to the list of his DMK targets, this one for 'dynasty rule', after the latter was inducted into the state ministry.

It is a charge that had been laid against the DMK's 'first family' after the late party patriarch Muthuvel Karunanidhi kept inducting his late nephew Murasoli Maran, children and his grand nephew Dayanidhi Maran into politics, legislatures and ministerial positions, whether in the state or at the Centre.

Incidentally, Maran Sr, was a minister in the BJP-led Vajpayee government from 1999 until his death in 2003.

The BJP did not have complaints then. But then the DMK especially would not want to be reminded of those days as the coalition did not work electorally favourably to the party in the state 2001 assembly elections.

With the result, the DMK counters to the state BJP's charges, whether from Annamalai or other leaders or their faceless social media campaigns, do not want to refer to the Vajpayee era.

In a recent tweet, Minister Senthil Balaji referred an otherwise innocuous-looking wrist-watch on Annamalai's hand, claiming it was one of the 500 'Rafale' special edition, collector's item.

The minister claimed that the watch cost ₹5 lakhs. He sought to know the price of the watch and also the source of funding.

Promptly, Annamalai acknowledged it, said it cost him ₹3.5 lakhs.

Smelling a trap, he also clarified that he had purchased it on May 31, 2021, and would produce the receipt, instantly.

Therein hangs the tale. Tamil YouTube news chats and social media expectedly claimed that Annamalai gave the date as he did only because he had not mentioned it in his income affidavit, filed along with his nomination for the Aravakkurichi seat in the assembly polls held on April 6, 2021.

He lost the election, but under his stewardship, the party won the highest number of four seats in the 234-member Tamil Nadu assembly.

But the catch did not end there. Journalistic busy-bodies dug out the Web site of the Rafale watch manufacturers Bell & Ross and also that of the French fighter jet-makers, to state that only 500 watches were made, that too in 2015, and were believed to have been sold out not very long after.

They said the price was the equivalent of what Annamalai said at the time, but was closer to what Senthil Balaji claimed at current exchange-rates.

The gratuitous among them were considerate to say that Annamalai could have purchased it in second-sales, especially if it was bought only in May 2021, but he had not clarified if it was so.

Again, at least to shut his critics' mouths, he should come up with those details.

If it was a gift after he entered politics, of a wrist-watch that could have been purchased earlier, he has not claimed thus. But it he had received a gift of the watch, while serving in Karnataka from 2011 until resignation in September 2019, again, he was barred under service rules from accepting gifts worth above ₹5,000.

That is not all. The media investigators/interrogators wanted Annamalai to clarify how he managed to purchase a watch that was not available in the market when he claimed he had done in 2021.

They queried, if he had purchased it in 2015, which was a possible natural date of purchase (whoever it be), did he get prior approval from the Union home ministry, and did he include it in his annual wealth returns, again required of every civil servant. IMAGE: Home Minister Amit Shah is welcomed by Tamil Nadu BJP chief Annamalai and other leaders on his arrival at the BJP party office in Chennai, November 12, 2022.

This turned the heat on Annamalai and his loyalists within the state BJP. They have gone back to his earlier queries and allegations on how DMK ministers were corrupt, and also Stalin's son and son-in-law wore wrist-watches that cost crores.

Annamalai, however, changed tack, to declare that he would come out with the bill and other details of his purchase only when it became a talking point ar street-corner tea-stalls across the state, that too on the eve of his state-wide padayatra, which he has planned from April 2023.

Incidentally, Annamalai had earlier set his padayatra for January, but said, he was postponing it as it would be examination season for school-children and his programme would disturb their preparations.

This by itself has flagged a volley of derisive memes. Critics are more open, they say, he hoped that they all would forget the 'watch row' by then.

The state BJP is a house divided. The vocal and vociferous that are Annamalai's camp-followers seek to deflect criticism by alleging DMK corruption, and Udhayanidhi's 'inheritance'.

There are others, particularly the older-generation party loyalists, many of whom have been around from the parent Jana Sangh's days and also have long RSS links.

The latter class say the DMK's idea, or that of Senthil Balaji, was only to challenge Annamalai's credibility -- and by extension that of the BJP in corruption matters.

According to this section, Tamil Nadu has seen enough and more of 'Dravidian corruption' and people are as much tired of such allegations as they are distraught about the goings-on.

In this context, BJP veterans point out how DMK's Karunanidhi returned to power after all the corruption allegations and the Justice R S Sarkaria Commission of Inquiry, all in the 1970s.

On the other end of the Dravidian political spectrum, they also refer to the way Tamil Nadu voted back AIADMK's Jayalalithaa in the assembly polls of 2001, after having voted her out of power and out of the state assembly, only five years earlier in 1996.

During the pendency of a court-stayed prison-term in the 'TANSI land-scam' case, Jayalalithaa actually contested and won four assembly seats at the same time, in 2001.

Tamils voted for her, Karunanidhi and all those otherwise alleged to be corrupt, either by their political rivals or commissions of inquiry, or the state of Tamil Nadu as the prosecutor.

Like the rest of the country, the general perception in Tamil Nadu is said to be that the Congress is corrupt, and that the Nehru-Gandhi family has not done it right for the nation.

Yet, alternatively since losing power in 1967, the Congress has won seats, both to the state assembly and the Lok Sabha in the company of the DMK or the AIADMK.

After losing the state assembly polls in the ruling BJP ally at the Centre, the DMK as the governing party in the state, split the alliance, never to return to the fold.

It has not done badly for itself, since then, barring the assembly polls of 2011, when 2-G scam mattered.

Otherwise, the electoral fate of the Congress or the BJP is linked to that of its Dravidian partner. 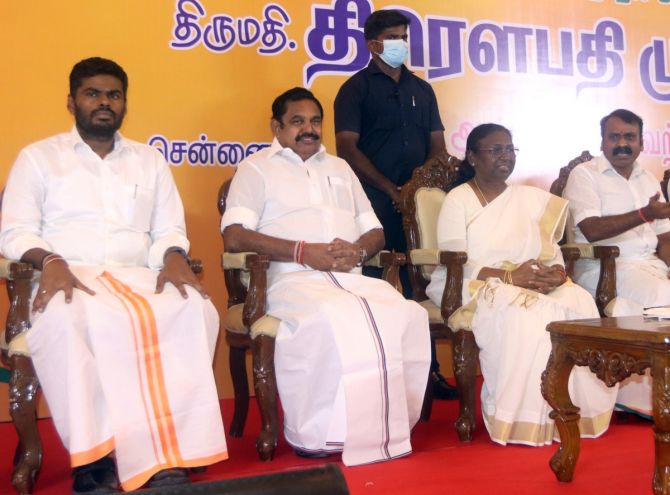 Yet, there is no denying the 'clean image' that the BJP has been able to put up in the state, in the absence of any scam against Prime Minister Narendra Modi's government that has stuck.

Even the 'Rafale fighter scam' that a section of the political Opposition and the national media argued convincingly did not stick, as the Supreme Court dismissed all such allegations.

Today, when a wrist-watch brought out in very limited numbers by the fighter manufacturer is at the centre of a graft charge, it does not seem to be aimed at dig out the fighter scam.

Instead, it seeks only to challenge the credibility of the state BJP, especially party president Annamalai.

In this context, veterans ask, though only in private, how an IPS officer, who was a district superintendent of police in Karnataka, repeatedly jumped the gun and came up with his quick and at times unthinking responses even without second-guessing the possible questions.

If that was true, was he implying that she bought the expensive watch as a gift? If so, has she shown it in her income-tax returns for the relevant year?

Still, the time of purchase would remain, as he has claimed to have purchased it only in May 2021, and not six years earlier, when alone the makers claimed to have manufactured all 500 Rafale watches.

Annamalai sounded serious when he said he purchased the watch because it was made from the scrap of Rafale fighters that were serving the Indian Air Force, and that it was a sign of his patriotism.

Not stopping with it, he even claimed that his was the 149th piece in a total of 500.

His party veterans are having a hearty laugh over it, saying it sounded as silly as Annamalai sounded serious about it.

They readily concede that Annamalai has been aggressive in his attack on the Dravidian polity, as he was expected to, and more so against the ruling DMK, with which the BJP does not expect to have an electoral pact any time soon (that is, if at all).

Hence, the attempt was to discredit him, and that is precisely what the DMK has achieved, without batting an eye-lid, Annamalai's rival camps within the state BJP add.

This is because, with the AIADMK remaining a divided house full six years after Jayalalithaa's death in December 2016, the BJP had sought to fill at least a part of the political void in the Opposition space, even if it was only to drive a hard bargain with the regional party in the Lok Sabha polls of 2024.

But neither corruption, nor religion could be the pitch, and the BJP has little or no option in the matter.

If anything, the continuing four-way infighting in the AIADMK, respectively under EPS, OPS, Sasikala Natarajan and her nephew T T V Dhinakaran, has meant that DMK's Stalin did well to name his son as the heir-apparent.

Even if it meant 'family rule', there is a perception, which some in the BJP too share, that Udhayanidhi's elevation has clearly set out the line of succession and the line-of-command in the party -- which is seen as a boon over the medium and long-terms, and not a bane.

Together, the BJP in general and Annamalai otherwise may have lost their argument even before they had made an impact! 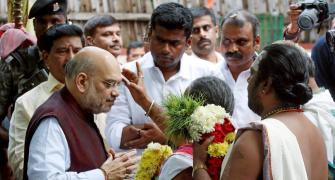 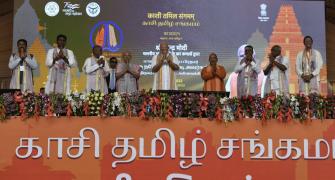 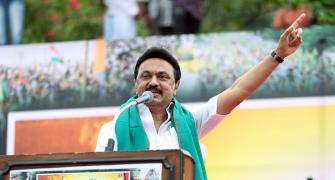