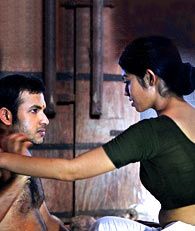 The media in Kerala seems obsessed with women and sex, says Shobha Warrier.

Shocking images of aggressive men and women throwing stones at the police… The police, in turn, using water cannons… Violent hooligans taking vicarious pleasure in destroying public property... These are part and parcel of life in Kerala.

Something else has become integral to Kerala these days -- thunderous newspaper headlines and television channels screaming of sleaze and sex.

Keralites are passionate about politics, more so than the average Indian. Scandals, generally involving money, go hand-in-hand with politics. In Kerala, however, what sells are scandals involving the sex life of politicians.

When these stories turn stale, we can always depend on a certain politician to entertain us. He willingly appears on any television channel to air his views, which are always peppered with expletives, perhaps to amuse himself and the viewers.

The channels gleefully beep out his interviews as if they were A-rated films.

Viewers, equally gleefully, imagine his muted expletives even as they close the eyes and ears of the young ones around.

The scandalous stories of sex and sleaze oozing out every day are a veritable feast for the sensationalism-hungry media in Kerala.

An unhappy outcome of all this is the unfortunate ‘trial’ of a politician who is 'perceived' to be clean. I am talking about the chief minister of Kerala, Oommen Chandy.

Only a couple of months ago, minister Ganesh Kumar and his wife (who is a doctor) abused each other on various television channels. While she cried foul about his womanising ways, he showcased his bruises and accused her of physical torture.

Kumar’s sexual escapades were discussed on television channels as if they were a complex political story, till the minister lost his chair and his wife got a settlement.

An embarrassed Chandy was dragged into this domestic quarrel and asked questions about the personal life of the minister and his wife.

Kumar’s wife petitioned Chandy to solve her marital problems as if it were a chief minister’s job to act as marriage counsellor!

It is also bizarre to see the way the chief minister is insulted, ridiculed and criticised by the media because some cheats met him, took photographs with him, called him and some people associated with his office connived with the crooks to cheat the public.

The anger of the opposition and the media has not simmered down though the guilty were booked for the crime.

Once again, it is no ordinary cheating scandal; it involves a woman, Saritha Nair, and a small-time television actress, Shalu Menon. The real culprit, Biju Radhakrishnan, has been pushed into the background as stories of con-women sell more.

Chandy was even criticised when a man in the CMO's call centre misbehaved with a female caller!

Saritha Nair's calls to various ministers have been discussed with insinuations of something more than cheating; the reading between the lines hinted that sex involved.

The two women were depicted like cabaret dancers, gyrating their hips and luring men by singing sexy numbers.

Those familiar with the way Chandy has operated so far know that anybody can call or walk into his office; anybody can meet him. Is he now being put on trial for opening the doors of the chief minister's office to the public?

His mass contact programmes -- where he has met thousands of people at various places in the state -- have been a huge hit. Anybody could join the queue to talk to the chief minister and air his complaint or views.

I still remember how the media (at that time it was only print) in Kerala destroyed the life of a scientist called Nambi Narayanan.

I now see a similar trial of a man whose only crime seems to be the fact that he opened the doors of the establishment to the people.

It appears if the chief minister had, like his counterparts in other states, confined himself to his office and remained inaccessible to the public, nothing of this sort would have happened.

Perhaps the media in Kerala do not appreciate such openness. They have not encountered a situation where you have absolutely no access to the office of the person in charge of the state.

Coming from a place where it is just not possible to make any contact with the state's highest office, one can only appreciate Chandy's openness.

In the last two decades that I have lived in Tamil Nadu, I have not had the ‘good fortune’ to interview any of its chief ministers.

I have, on the other hand, met all the chief ministers of Kerala during this period without much difficulty.

Of all the chief ministers I have met -- from E K Nayanar to K Karunakaran to A K Antony to V S Achuthanandan -- I found Antony and Chandy to be the most simple and the most accessible.

Tragically, what is happening in Kerala right now is a trial by the news-hungry media, especially the visual media.

They have gone berserk showing images of sexy women and small-time actresses. Their reportage on sex scandals leads one to believe there is no news other than sex and women in Kerala.

Not to be left behind, the so-called reputed newspapers carry huge front page photos of women as if they are the most important people in Kerala now.

The media in Kerala seems obsessed with women and sex because Kerala is a repressed society. And perhaps, in a sex starved society, only stories about sex and sleaze sell.