By B Raman
September 10, 2009 17:25 IST
Strategic affairs expert B Raman on why the Chinese military is unhappy with the Indian media's shrill anti-China rhetoric and why it could hurt both countries's interests.

In a report titled 'China Refutes Trespass Claims' carried on September 10, The Global Times, the English-language daily published by the Communist Party-owned People's Daily group, has quoted a spokesperson of the Chinese ministry of national defence as saying that Chinese border patrols strictly abide by the relevant agreements on the Line of Actual Control along the India-China border and have never carried out 'provocative actions' towards India.

According to the newspaper, he said on September 9: 'The recent reports by Indian media of intrusions are groundless and irresponsible.' The previous day, Jiang Yu, a spokesperson of the Chinese foreign ministry, had described the India reports of a Chinese troop intrusion into Indian territory near Mount Gya in the Ladakh region as 'groundless and incorrect.'

The paper also quotes Ouyang Wei, a Chinese military expert from the University of National Defence, as claiming that the negative reports on China by Indian media far exceeded negative reports on India in the Chinese media. He described this as a very significant problem in the bilateral relations and added: 'The Indian government should investigate the irresponsible reports, to find the sources of the fake news, and refute the rumours.'

Chinese non-governmental analysts have also been critical of the way sections of the Indian media sensationalised an incident involving the temporary detention of a plane of the UAE air force at Kolkata earlier this week for not correctly declaring that it was carrying a consignment of arms and ammunition and 'combat missiles' to China.

According to them, these arms and ammunition and missiles, which were manufactured in China, had been sent to Abu Dhabi for displaying in an international exhibition of military equipment and were being taken back to China after the exhibition was over. These analysts have expressed surprise over the manner in which the whole issue was sought to be sensationalised by sections of the Indian media as if it was a sinister development.

The same report stated on this incident as follows: 'Dai Xu, a renowned military expert, said that the actions by Indian authorities violated diplomatic rights as the cargo on board belong to China. Any inspection on board, which may have violated China's property rights and constituted spying on its military secrets, should be approved by both the UAE and China,'it quoted Dai as saying.

An unnamed military source told the Global Times the UAE airplane was on a mission transporting Chinese arms from an arms expo in Abu Dhabi. 'When the airplane stopped in Kolkata on Sunday to refuel, the UAE crew member used the empty cargo certificate it used when it flew to China to carry the weapons at the beginning.'

My comment: While it is important for the media to report instances of alleged Chinese troop intrusions into Indian territory, it should take care at the same time not to create an anti-China frenzy, which may get out of control. One was disturbed by the way a national television channel played up in a jingoistic manner the incident in the Ladakh sector in which a Chinese patrol is alleged to have intruded into Indian territory and painted China on a stone.

Two acknowledged experts on China, who have an excellent knowledge of the Chinese language, appeared on the programme -- a reputed academic of Delhi and a retired China expert of the Government of India. One would have expected the anchor to ask them to translate for the viewers what was written on the stone and to comment on the implications of it.

If he had done it, the entire jingoistic programme might have ended in a fizzle. He did not do so. Instead, most of the time, the viewers were subjected to an anti-China harangue by a retired army officer.

I myself do not know Chinese, but I am told by those who know Chinese that what was written on the stone was 'MiddleYellow River'. It could also be translated as central Yellow River.

Middle can also refer to China -- an allusion to the so-called Middle Kingdom. What should have been discussed at the very beginning of the programme was: Normally, detractors of China refer to it as suffering from the Middle Kingdom mentality. Would a Chinese soldier use it? Why the reference to the Yellow River? Where is this river?

Instead of having a balanced debate on such questions, the anchor went bang, bang, bang against China without first ascertaining from the two Chinese experts what exactly was written on the stone, which was shown in a sinister manner to viewers.

We have a very strong case against the Chinese on the border issue, which we should project in a non-sensational, non-jingoistic manner, but by indulging in such methods we might find our credibility weakened in the eyes of the international community.

The danger of the India-China hysteria 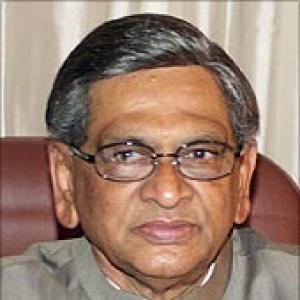