Nitish Kumar will be the chief minister only till the time the BJP wishes, points out Ramesh Menon. 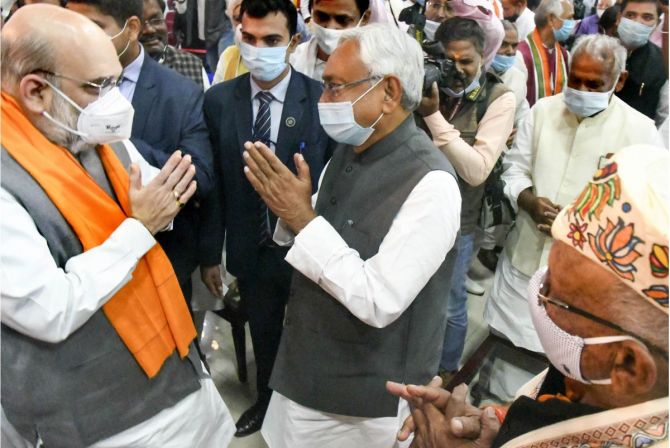 The Bharatiya Janata Party and the Janata DaL-United may have narrowly won Bihar, but they cannot take the electorate for granted anymore.

This has been one of the biggest lessons in the state election. It will have to bring in fundamental changes it promised like development and creating jobs. It is not going to be easy.

Bihar's per capita income is at around Rs 31,287 which will work out to be about 33 percent of India's average.

If this has to change, there has to be a dynamic leadership that can look beyond caste and communal binaries.

Bihar has a literacy rate of around 70 percent which is the third lowest in the country.

Two out of every five women in the state cannot read or write.

Bihar's manufacturing sector is just 1.3 percent of what India manufactures.

The credit-deposit ratio in Bihar is just 34 percent indicating low economic activity. Compare it to Maharashtra which boasts of a figure of 106 percent. Tamil Nadu's credit deposit ratio is 109 percent.

Bihar with its low development indices, has a long way to go. 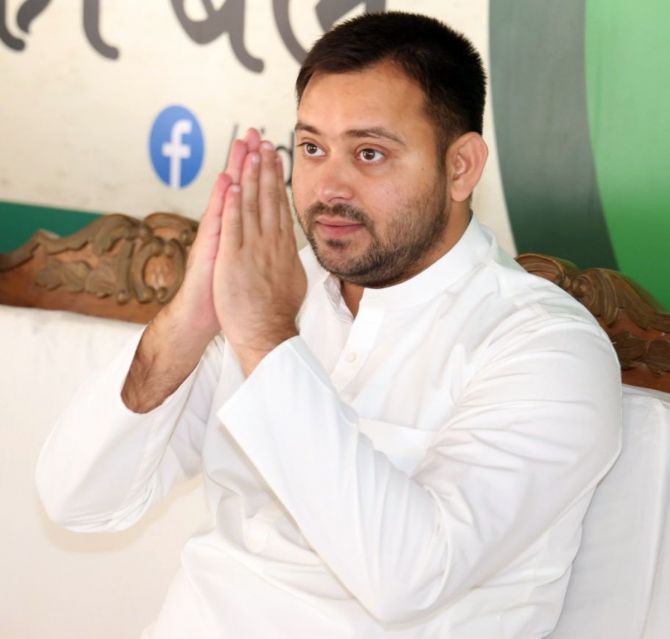 Ironically, the AIMIM and VIP tried to be a part of the Mahagatbandan coalition before the election, but were not welcomed. No party wanted to touch the AIMIM for the fear of losing the Hindu vote.

The AIMIM is no more a political untouchable. It is understandable why AIMIM President Asaduddin Owaisi had a smile when the results were announced.

It will be interesting to watch how the NDA and the Mahagathbandan groups walk the tight rope in the next five years.

Nothing is impossible in Indian politics.

Do not forget how the BJP which lost both Karnataka and Madhya Pradesh are now in power in those states.

Also, remember how it lost Maharashtra that it stealthily grabbed in the early hours of a November morning one year by briefly winning over Nationalist Congress Party leader Ajit Pawar. And, then having the carpet pulled from under its feet soon after.

That is why the BJP while asserting itself will have to treat Nitish Kumar with kid gloves.

Now that the BJP is in power, let us see if it fulfills one of its impossible poll promises of creating 19 lakh jobs in Bihar that has a battered economy.

Even if it creates these jobs, there will be a serious shortage of skilled educated labour. It is not just jobs, but education which will also have to be completely re-engineered in the state.

It is not true that caste and communalism was not an issue in the Bihar elections. It very much lurked around.

Political commentators and anchors on television were gloating about the fact that caste did not matter in Bihar as voters were more concerned about real issues. Not true.

Look at how the different parties distributed their tickets to figure out that caste mattered to all the political parties as they worked their arithmetic.

The RJD gave a huge chunk of its tickets to Yadavs.

The JD-U chose to give it to non-Yadavs and other backward castes.

The BJP and the Congress both fielded upper caste candidates.

The Lokshakti Janata Party, which was founded by the late Dalit leader Ram Vilas Paswan. ironically had a huge number of upper caste candidates!

It may just sound politically correct to say that caste and communalism were not an issue, but the truth is in reading the results.

Just because leaders this time chose to talk of jobs and a better life for Biharis does not change the deep-rooted identity politics that the northern state has always been known for.

While Hindutva politics was very much at play with UP Chief Minister Ajay Mohan Bisht being one of the BJP's star campaigners, look at how the All India Majlis-E-Muslimeen fared.

It pulled off an impressive win in the Muslim dominated Seemanchal region.

Clearly, Muslims, who earlier voted for the RJD and the Congress in Bihar, have now settled for a Muslim party wanting an identity and not be seen as a mere vote bank.

The good thing was that material issues at least came to the fore this time in the election speeches.

Jobs mean a lot to the population which is forced to migrate to faraway states looking for work.

Tejaswi Yadav spoke of jobs, education, and development at every rally and it seemed a new wave was making its way into Bihar's politics.

Initially, when the election season had been kickstarted in the state, political parties like the JD-U and BJP were shouting from their rooftops demanding justice in the Sushant Singh Rajput suicide case as if that was what was going to determine the outcome. It died a natural death.

It had to do so as issues like this hardly can motivate a voter into action. Political parties must recognise that the mood of the Indian voter is changing. 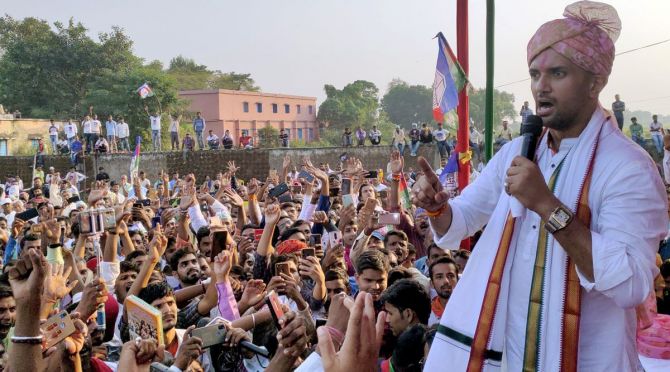 When 37-year-old Chirag Paswan, who is the president of the Lok Janashakti Party, announced that the next government in Bihar would be a coalition between the BJP-LJP, a lot of feathers fluttered as his party was a part of the National Democratic Alliance headed by the JD-U and the BJP.

Chirag had broken away to contest seats independently. He asked voters not to vote for the JD-U. This would have shaken up the coalition and one would have expected the BJP to crack down on him. But, it did not.

Was there a tacit understanding between him and the BJP?

Observers say there was one as the BJP would have not tolerated one of its allies breaking away from its winning combination.

Prime Minister Narendra Damodardas Modi and Home Minister Amit Anilchandra Shah are not the kinds of politicians who would keep quiet with such a development in a state that is very crucial like Bihar.

The BJP adroitly kept silent as Chirag openly attacked Nitish Kumar and the JD-U at his political rallies saying that Bihar needed a change of leadership.

That the BJP would want to cut down Nitish Kumar, who has been chief minister for the last 15 years, is obvious as the LJP development showed.

The JD-U was in a dominant position compared to the BJP and if that continued, the BJP would not be able to control Bihar and build its base.

History indicates that the BJP would rather have a weak ally than a strong one.

The BJP strategy has always been to weaken an ally so that it is dependent and plays second fiddle.

Allowing Chirag to plough his own furrow in the election helped reduce the number of seats that the JD-U won.

Had the LJP continued with the alliance, the JD-U would have won more seats than the BJP as the votes would not have got divided.

End result: The BJP for the first time had more seats than the JD-U.

The BJP is not insisting on naturally claiming the chief minister's coveted chair as there is fear that Nitish would cross over to the Mahagathbandan and form a overnment.

He has changed sides before and can do so again as he is one of the most crafty politicians that Bihar has seen.

One day he was hand in hand with Laloo Prasad Yadavl; another day he was with Modi who he had lambasted after the 2002 riots in Gujarat.

At his rallies Chirag repeatedly said Nitish would go with folded hands to the RJD, make peace with that party, and ride back to power.

The BJP is clearing humouring Nitish Kumar for now when it says he will continue to be the chief minister though it is the dominant partner.

The BJP obviously does not want to lose out on the opportunity of building a larger base in Bihar.

With the JD-U on the decline, its traditional vote base of the extremely backward castes is up for grabs and the RJD may move in to capture that.

Some of it will go to the Left parties who are growing in Bihar even as they decline in the rest of India. 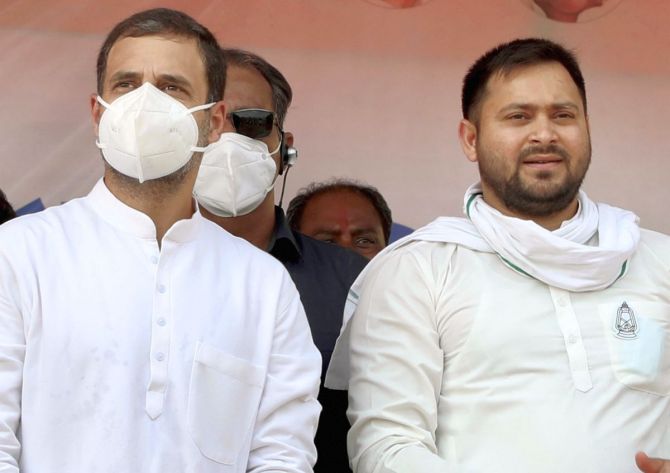 One thing that became clearer than ever was that the Congress is slipping and losing whatever sheen it had.

It bulldozed the RJD into giving it 70 seats to contest though the RJD only wanted to offer 40.

The Congress did badly in the Gujarat, Madhya Pradesh, Uttar Pradesh and Maharashtra by-elections.

Twenty-three brave Congressmen recently got together and in a signed letter to interim party president Sonia Gandhi had asked that elections be held to elect a new working committee and a new president.

Nothing really came out of it as they all got sidelined. It is amazing how the party is writing its death wish.

After the Bihar election, the Congress has become a visible liability for any coalition.

Emergence of the RJD

What will be interesting to watch will be how the RJD will shape up in Bihar as it cannot be now written off after Tejaswi Yadav's show of strength.

It has emerged as the largest party in the assembly winning one more seat than the BJP. The JD-U is a poor third.

Tejaswi has caught the imagination of the young voter. This was evident in his rallies which were short, to the point, and focussed on jobs, education and development. He addressed over 250 rallies.

Nitish had done so well as the chief minister in his first term 15 years ago. He energised the bureaucracy, woke up sluggish government machinery, created a new work culture, brought in technology, empowered women, and did everything possible to change Bihar.

So much so that he was even considered as a prospective future prime minister.

In the years that followed, he lost his way as the focus was on staying in power. No one calls him a 'Sushashan Babu' today. He is a pale imitation of what he was.

He will be the chief minister only till the time the BJP wishes. He knows that.