Bal Apte: The man who built a generation Vivekananda aspired for

Bal Apte's life was his message, writes Tarun Vijay paying tribute to the RSS stalwart who passed into the ages last week

In the late 'sixties, the chief examiner for Mumbai University's final year law exam had a young friend appearing for it. The student and the professor knew each other well. Yet, neither did the examiner ask him for the roll number, nor did the student give a hint about it. After the exams were over, both met and had a hearty laugh, saying everything without uttering a single word.

The examiner was Bal Apte, who would help build the largest student force in India that gained world fame, and the student was Madan Das, who went on to become a Rashtriya Swayamsevak Sangh stalwart.

This is how the ideologue worked, incessantly building the character of youth by his own example and powering organisations dedicated to the nationalist school of thought.

Bal Apte, a brilliant Supreme Court lawyer lived the life of an ascetic devoting all his time and resources for the organisation. He was the person Dr Hedgewar; founder of the RSS, would need to create a formidable, highly motivated force of workers with unflinching faith in the ideology.

Ideology gives you strength to face challenges and mitigate the fear of hurdles, he would say. A tough, hard taskmaster, he had the heart of a mother. Known and often feared as an unyielding disciplinarian, he was guardian angel to thousands of Akhil Bharatiya Vidyarthi Parishad workers who regarded him as a friend, philosopher and guide.

When the Left- and Congress-run bodies ruled the campuses and saffron was invisible from the areas dominated by fashionable elements mocking at the patriotic shades of activism, Yashwant Rao Kelkar envisioned a student force that would speak and work for India, which was later taken over by Bal Apte as its president. Soon the ABVP spread its wings all over India, challenging ideological opponents and having its members often murdered by Left extremists in Kerala, Andhra Pradesh and elsewhere.

Bal Apte was responsible for creating an atmosphere of creativity and a strong allegiance to organisational ideology, putting up the ideals of Swami Vivekananda. One of the finest projects of the ABVP, My Home is India, invites students from the north-east to live with families in Mumbai and elsewhere for enriching them with an affectionate and caring India experience. At least two chief ministers of Arunachal Pradseh have grown up with this experience.

Later, in 1985, the ABVP launched the World Organisation of Students and Youth. It is the first international youth body with India as headquarters. The organisation works to bring together students and youth from various countries to promote peace and welfare of humanity.

Apte also served as additional advocate general for the state of Maharashtra from 1996 to 1998. As hon. professor, he taught law at the University of Bombay for 12 years. He wrote many celebrated books, but the one analysing the Supreme Court verdict on Hindutva became more famous.

His life was his message. For 38 years, the best part of his youth, he worked to build the ABVP as a formidable students force. His wife, Nirmala, works with Stree Shakti, a project for awakening on women's issues, and his only daughter, Dr Jahanavi, worked as full time worker for the ABVP. One of his closest associates, Prof Raj Kumar Bhatia, describes him as a sage-politician who would never compromise on principles .

He was my guide and conscience-keeper as president of Dr Syama Prasad Mookerjee Research Foundation. For the first time, through this foundation, several rare works of Dr Mookerjee were re-searched and published and a research project initiated to collect his parliamentary speeches. When we proposed to hold the martyrdom day of Dr Mookerjee in Srinagar, another first, almost everyone discouraged us. They said, 'Have a programme in the name of any other person, but not Dr Syama Prasad Mookerjee, that too under a government led by the grandson of Sheikh Abdullah'. And history tells us too, that never before was any programme dedicated to Dr Mookerjee held there. Bal Apte heard us and decided, 'We will have it there only'. And it was a roaring success.

Such was his strength of conviction that after his moving, inspiring speech, the entire audience, numbering approximately 400, and almost everyone a Kashmiri Muslim, stood up and sang the national anthem.

He could have easily got a third term in the Rajya Sabha, but he refused saying, 'I will use my experience in other fields as the RSS decides'. The day his Rajya Sabha term expired, he packed up and left for Mumbai, after vacating his house.

There were several instances when he was approached by 'pragmatic' persons wanting his Member of Parliament Local Area Development fund for 'mutually beneficial' schemes, assuring a certain percentage from the funds to him. Such people had to face his wrath in such a way that they would never dare to approach him again.

He was not happy with the present political scenario and often felt disgusted and, above all, compromises on core issues saddened him. And he often spoke strongly on such degradation, becoming a human mirror to all. His commitment to ideology was complete and he would never allow the slightest deviation from the basic approach towards various national and international issues.

There are people who are known for their wealth and others for their academic achievements. But Bal Apte was a man who would be known by the workers he created for the organisation. Seeing the commitment and the excellent track record of the organisational cadre alone, one can value the contributions of the publicity shy Balasaheb. 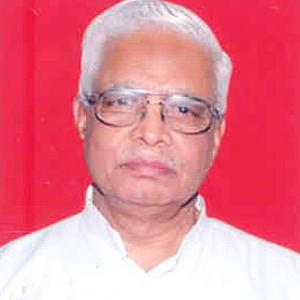