Blog blockade will be lifted in 48 hours

The blocking of blogs hosted by sites such as Blogspot, Typepad and Yahoo! Geocities by Internet Service Providers is likely to be lifted within 48 hours.

At least that is what Amitabh Singhal, a spokesperson of the Internet Service Providers Association of India (ISPAI) told this correspondent on Wednesday.

Singhal said representatives of various ISPs met on Wednesday to discuss the issue after the media took it up earlier this week. He acknowledged that some ISPs -- he insisted it wasn't all -- mistook the Department of Telecommunications (DoT) notice and blocked entire blog domains, adding that it was technically feasible to block a sub-domain and leave others still accessible.

If, for instance, DoT wanted a certain blog -- say shivam.blogspot.com --blocked, it was feasible to just block that URL, without restricting access to other blogs with the blogspot.com extension.

"An advisory is being sent from ISPAI to member ISPs saying they should configure their Domain Name Servers (DNS) in such a way that they block only the sub-domains DoT wants blocked," said Singhal, adding, "It would help if, in future, DoT could also mention the mechanism by which sites should be blocked."

The advisory is a result of a meeting held on Wednesday between executive members of ISPAI, representatives of DoT and the Department of Information Technology. "We expect the problem to be resolved within 48 hours," said Singhal.

As news of the blockade spread to the national and international media, Indian bloggers -- organised under the Bloggers Against Censorship banner -- continued to devise a strategy to counter it. Some have filed Right to Information applications, while others are considering a Public Interest Litigation. They say they are against any kind of censorship, even that of non-blog Web sites such as HinduUnity.org

Interestingly, the Indian consulate in New York has also sought to explain the ban. According to e-mail sent by A R Ghanashyam, deputy consul general, to a representative of the South Asian Journalists Association, a write up containing derogatory references to Islam and had the potential to inflame religious sensitivities, had appeared on a blog.

DoT took up the matter but, because of a technological error, ISPs went beyond what was expected of them, resulting in 'the unfortunate blocking of all blogs.'

HinduUnity.org and HinduHumanRights.org are among 17 sites sought to be blocked, on the grounds that they are spreading Hindu nationalist propaganda. Accessed through an anonymizer, HinduUnity.org was found to have articles against Congress party President Sonia Gandhi and Indian Muslims. It also had a 'hit list' of people it considered anti-Hindu.

Another site on the list is Rahulyadav.com, set up by a US-based person who calls himself a member of the Vishwa Hindu Parishad. Dalitstan.org, on the other hand, calls itself a 'human rights organisation working for the upliftment of Dalits.'

None of the sites seem to possess any direct security threat to India, or have any connection with the recent Mumbai blasts. Even more bizarre are the blogs sought to be blocked. 'Princess Kimberley' is a defunct blog with just two postings in 2004 about an American teenager's depressing life. 'Commonfolk Commonsense' is a Chinese language blog, while 'Exposing the Left' is written by someone in Southern Illinois!

DoT has not explained why these sites need to be restricted from viewing by Indians. Amitabh Singhal said the ISPs were not in favour of Internet censorship, but were bound by terms and conditions of the license granted to them by the government.

-- The reporter blogs at National Highway 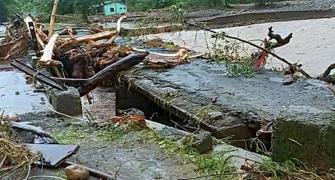