Who can beat the Big Bachchan? 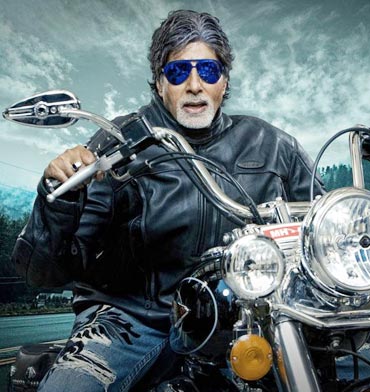 If you ask one of the many villains he's walloped through his 42-year career, nobody.

And yet Bachchan keeps finding adversaries, either on screen or off. Can the pretenders start doing their own thing or must they try and don the legendary warrior's armour? Will these remakes of Bachchan's work never cease?

Here, then, is a look at how we rate the competition: a few A-list actors taking on roles originally made famous by Amitabh Bachchan.

We pick our winners, now you, dear reader, do the same. Enjoy. 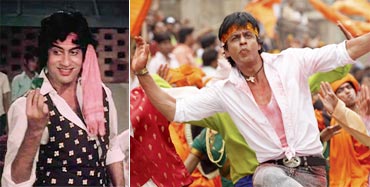 They both like their suits well-tailored and their billis junglee, but that's just where the similarity ends between Khan's Don and the original.

Where Bachchan's Don was cool, calculated and would rather die than step out of his gangster-boss persona, Khan's Don spent half the remake pretending to be a country bumpkin -- and he was far more convincing than a crime lord should be.

The sequel's coming up, and while Khan sure earns points for ruthlessness, he can't quite match up to the old tiger.

Our winner: Bachchan, by a long shot. 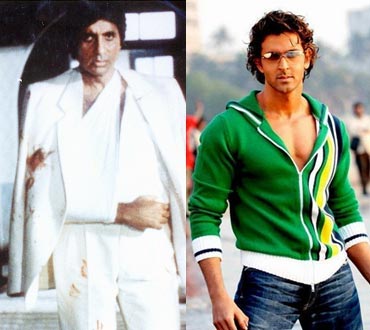 Agneepath, the film that won Bachchan his first Best Actor award at the National Awards, featured him as an angry but grizzled hero, one whose very voice was soaked in deliberation and dread, making even his mentioning his own name -- 'Vijay Dinanath Chauhan' -- a moment of sinister, screen-scorching awe.

Roshan, while an increasingly competent actor, has a fair way to go before he steps out of his dancing shoes and into those larger-than-life ones, and he ought to be worried about how he plays the voice. Because comparisons are inevitable. As is defeat.

Our winner: Bachchan, unless Karan Johar makes this Agneepath a musical. One of Bachchan's most effortless performances came in Satte Pe Satta, a wonderfully joyous remake of Seven Brides For Seven Brothers. As the head of seven brothers named after days of the week (he was Ravi for Ravi-vaar, Sunday) Bachchan went from bearded caveman to charmer of nurses, all the while staying dictatorial big brother easily tempted into drink.

Dutt, who really seems far too old for the part, can be lovable and charming as demonstrated in the Munna Bhai films, so it isn't entirely bad casting. But can he do the flip-flop between the perfect Ravi and the vile Babu, the contact-lens-wearing villain? Tricky.

Our winner: Bachchan, no matter how the cards are dealt. 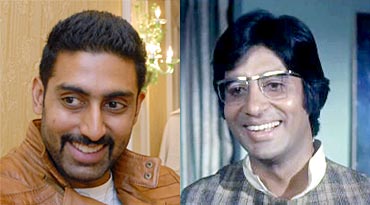 Now this is as blasphemous as it gets. In my book, Bachchan gave the performance of his career in Hrishikesh Mukherjee's comic masterpiece Chupke Chupke.

He played the geeky literature professor awkwardly masquerading as an expert botanist, falling in love with a young woman while pretending to be married to his best friend's wife -- and he was devastatingly good throughout, enough for me to rank a supporting role as the finest acting job he's ever done.

Junior's well-suited to this kind of ill-at-ease comedy, but while he could well try a film on similar lines, stepping up to be compared to dad at the peak of his tremendous powers seems just like hara-kiri.