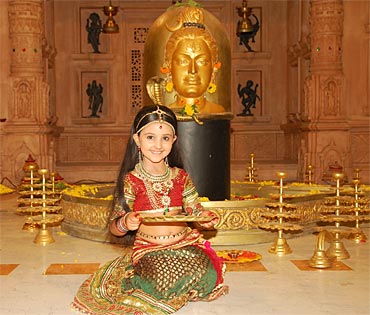 Zee TV's new show Shobha Somnath Ki is based on the Gujarati legend of the same name which narrates the story of India's unsung heroine Shobha. She fought fearlessly when the Afghan invader Mahmud of Ghazni tried to destroy the Somnath temple in the 11th century.

The very expensive set built in Amgaon near Vapi in Gujarat, has been designed by art director Jayant Deshmukh, who has worked as set designer for television shows Ram Milayi Jodi and Chajje Chajje Ka Pyar and films like Maqbool, Raajneeti, and Aarakshan.

Deshmukh says that making the set was very difficult because "There was no reference about this place anywhere except for some pictures. My team visited Somnath mandir in Gujarat, read books, went to their research department and met archaeologists. Vikasji (writer and producer Vikas Kapoor) helped a lot as he has been working on the story for a long time." 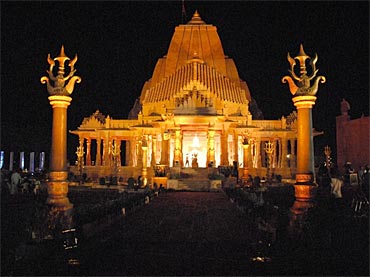 The most outstanding part of the set is the Somnath temple. "We made seven designs of the temple and each of them always resembled the third eye of Lord Shiva. That was one very peculiar and amazing phenomenon that we noticed during the making of the show. We combined everything and recreated the mandir," says Deshmukh.

The huge set sits on a sprawling eight acre plot. Five hundred skilled artisans worked on it for five months. It cost a whopping Rs 12 crore.

Producer and writer of the show, Vikas Kapoor, says, "Since there was no existing record of the original palace, the replica was built around multiple designs of ancient palaces in Gujarat around 1000 and 1100 AD. I did the research for six years. We tried talking to historians to understand what kind of society it was at that time. There are so many angles to Shobha's story and her life."

The child actress Ashnoor Kaur, who won accolades for her portrayal of Prachi in Jhansi ki Rani, is playing the young Shobha. 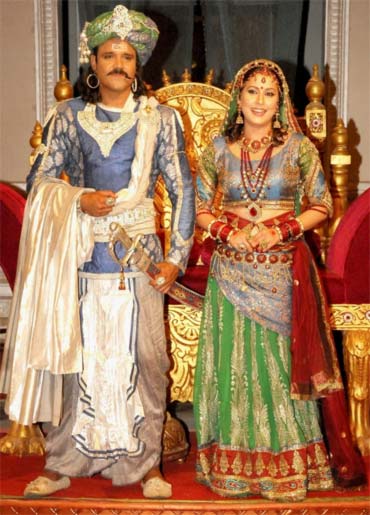 Ashnoor says that she enjoys the shooting, "Because I have my best friend rabbit (Tik tik) in this show. Also I enjoy playing with my friend Yana."

Ask her how she manages to deliver the long dialogues with the correct diction and pat comes the reply, "My mother teaches me and helps me rehearse the dialogues," says the seven-year-old, who wants to be an actress when she grows up, and lists Katrina Kaif and Akshay Kumar as her favourites.

She is often asked for her autograph and picture by students and parents in her school and says she likes it "but sometimes I get irritated when they ask for my autograph."

Gayatri is a mother figure who nurtures young Shobha into a fine young lady. 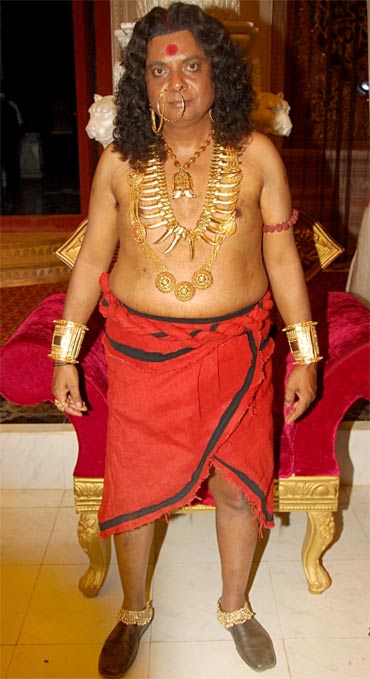 Amrita says, "I am doing period drama for the first time. I like attempting new things, moving out of my comfort zone and taking on new challenges. It's tough playing royalty from an olden era. Body language, diction and style are in complete contrast to the contemporary lifestyle we lead. I am playing a central character in the plot and her special bonding with princess Shobhana touched a chord with me."

Veteran actor Sadashiv Amrapurkar plays the role of Rudrabhada, an evil priest who uses dark forces and supernatural powers to grant his devotees their wishes, which come true, but always at some cost.

"Audiences shouldn't be surprised to see me as an evil priest because they have accepted me on the big screen as villain for over 30 years now. I look forward to viewers hating and cursing me all over again," smiles Amrapurkar.

'It's interesting to be a part of historical drama' 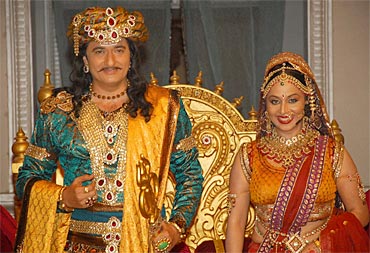 Daddachalukya, the noble king of Bharuch, is actor Yash Tonk in a never-seen-before avatar.

"It's interesting to be part of this historical drama.  It's an unexplored period of Indian history. When I was offered this show, I knew very little about it, unlike other historical shows which we have studied in school," he said.

Also making a debut as the powerful Mahmud of Ghazni is newcomer Vikramjeet Virk. Other prominent names in the cast include Pankaj Dheer, Avinash Wadhawan, Roma Bali and Sudhir Dalvi.