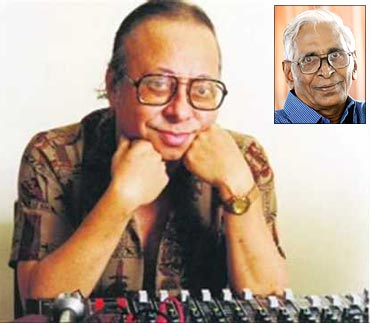 While star romances and break-ups are usually well documented, the music industry has many secrets that have never tumbled out of the closet.

Raju Bharatan, an assistant editor at The Illustrated Weekly of India , Asia's oldest English magazine till it shut down in 1991, and author of Lata Mangeshkar: A Biography and the recent best-seller A Journey Down Melody Lane, reveals some of those secrets in this three-part special interview with Rediff.com's Patcy N.

R D Burman 'Pancham' and Randhir Kapoor 'Dabboo' were good friends. Pancham had been signed to score the music for Randhir's directorial film, Dharam Karam. One of the songs needed to be picturised on Raj Kapoor.

Randhir told Pancham to compose that particular tune with Raj Kapoor present. But Pancham got upset and said, 'Dabboo, you did not tell me that I had to play a tune in front of Raj Kapoor, else I would have not signed the film.'

The reason why Pancham reacted this way was that he had had a very bad experience with Guru Dutt earlier. He had heard that Raj Kapoor was difficult to work with as well.

Pancham said Guru Dutt 'drove me mad'. He would finalise a tune after hearing a range of tunes, but cancel it at the very next sitting because his vision would change by then. He would ask Pancham to compose another tune. Pancham never understood what Guru Dutt really wanted.

Pancham thought Raj Kapoor was difficult while selecting tunes as well, and so when Dabboo asked him to play a tune for his father Raj Kapoor, he refused.

Randhir tried to reason with him, saying that Raj Kapoor was a very creative person. Pancham replied that he had worked with creative people before and knew exactly what happened when you worked with one.

He added that he only wanted to work with normal people.

After much cajoling, he finally agreed. He was very nervous because Raj Kapoor liked Shankar-Jaikishan, but did not like Laxmikant-Pyarelal's work.

When Dilip Kumar got nasty with Lata 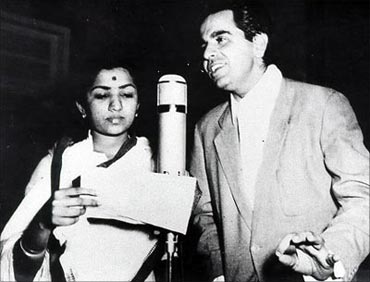 Dilip Kumar was traveling in the same compartment, so Anil Biswas introduced him to Lata.

During their conversation, Dilip Kumar learnt that Lata was Maharashtrian. So he said, 'En Maharashtrianno ke saath ek problem hota hai. Inki gaane main daal bhaat ki boo aati hai (The problem with these Maharashtrians is when they sing, they smell of dal and rice).

Lata took the hint and immediately kept an Urdu diction teacher, where she learnt the language carefully.

How Jaikishan increased his payment to Rs 5 lakh 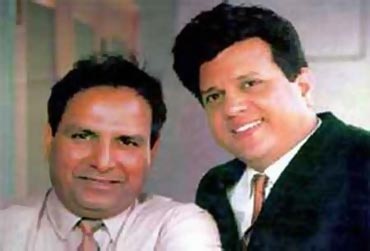 Shankar and Jaikishan's quarrel had begun. Shankar did not approve of Jaikishan's wife Pallavi. He thought she was a socialite and would not be able to take care of him.

Shankar was a simple person from Andhra Pradesh. The most important thing for him was that his girlfriend Sharda cooked his meal in the mornings.

After their quarrel began, Shankar-Jaikishan would sign films, but compose music separately. They would still use their joint name.

The morning that the song Aji Root Kar Ab Sadhana in Arzoo was composed, (lyricist) Hasrat Jaipuri and Jaikishan had come to the recording studio to record another song.

But it got cancelled so Jaikishan called Prem (Prem Sagar, Arzoo director Ramanand Sagar's son) and asked him to come over, as he had a tune which needed to be finalised.

After that, Jaikishan composed the tune in just a few seconds.

How Raj Kapoor made Shankar nervous 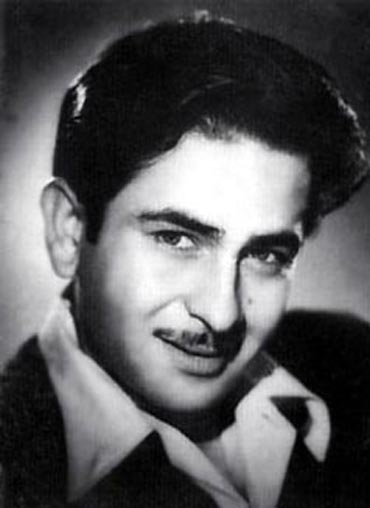 Raj Kapoor had a unique style of okaying the music in his films. He would sit on a chair and say, 'Sunao, aaj kya sunate ho sunao (let's hear what you have prepared).'

He would listen to Shankar's tunes one by one. He would not react to the tunes if he did not like them. He would not say anything or even shake his head.

Once he liked a song, he would say he liked it. Until then, there would be no reaction from him.

When the song Mere Joota Hai Japani happened, Shankar played four tunes, but did not get a reaction.

He was very nervous, and started sweating. As soon as the fifth tune was played, Raj Kapoor pounced on it.

Shankar told me later that that music session had totally drained him.

Did you know Mukesh could be out of tune? 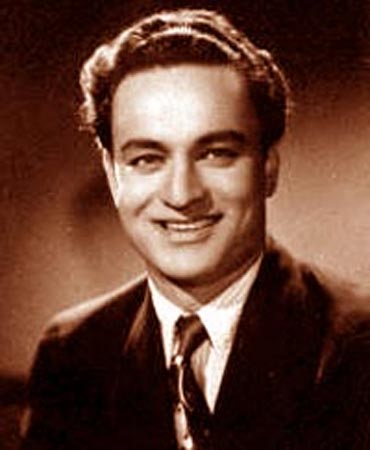 Shankar told me one day that sometimes when Mukesh would sing, he would be so besura (out of tune) that Shankar would leave the recording studio. He would ask his assistant Dattaram to coach Mukesh.

Shankar would return to the studio only after Mukesh got the tune and diction right.

After all the rehearsals, the final number would be mindblowing. That is why they kept working together 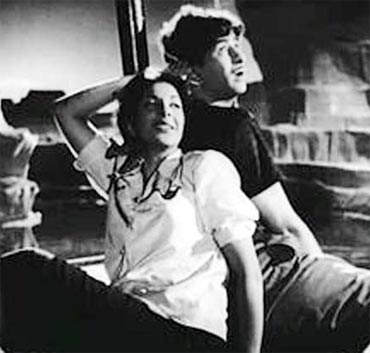 Raj Kapoor wanted to capture the monsoon and basti (shantytown) atmosphere in Parel (central Mumbai), where the sets of his film Shree 420 were put up. So he asked Shankar to give him a song quickly.

Shankar told me that for the first time in his life, he was nervous even before he had composed the tune!

It is a norm in the industry that a music director has to prepare at least six tunes for a song and play them for the producer and director, who will select one.

Though Shankar was a Punjabi, he had lived in Andhra Pradesh. So he would use Telugu words in the dummy versions of his songs.

He played the first tune, and sang the dummy words Ramaiya Wasta Vaiya. Raj Kapoor immediately selected the tune, and retained those words. 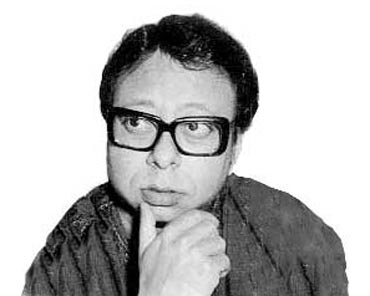 Pancham -- R D Burman -- was very poor in studies, so he was brought to Mumbai to train to become a music director.

When his father S D Burman asked him to play some tunes, Pancham copied some tunes and played them.

Dada (S D Burman) got upset. He told his son that the first thing you should learn in music is not to copy. Later, he felt that it was okay to copy, but only after reaching a certain stage in one's career.

Dada told him that he was far better at tennis than Pancham was at cycling, and yet he had not taken up tennis up as a career.

Why RD got upset with SD 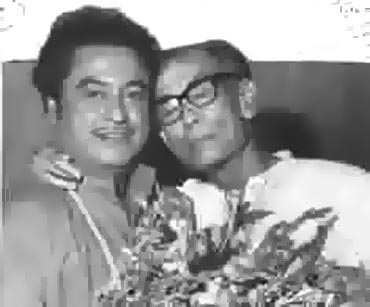 During a party to celebrate Aradhana's success, Dada told everyone that the music was his, and that Pancham was only his assistant.

Pancham stood in a corner throughout the party as his father hogged the limelight. Pancham was very upset even though he knew Dada's nature.

Later, Pancham got Kati Patang, but still felt ignored. Soon after that, he moved out of the family home.

How Lata would tease SD 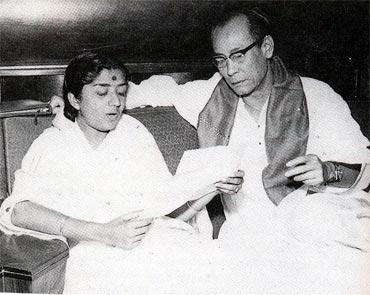 During lunch, he would ask everyone to leave so that he could have his lunch alone. He never liked sharing his lunch.

It is a custom in the industry that everyone had lunch together. Everyone would open their tiffins together. But Dada would ask everyone to leave.

Lata (Mangeshkar) was very naughty. She would linger even though she did not want to eat his lunch.

She liked to irritate him. Dada would shout at her and tell her to leave.

She would laugh, and then go.