The late Kannada actor Vishnuvardhan was born on September 18. To celebrate his first birth anniversary, his family and friends are hosting a three-day film festival starting today.

The screenings will be held at Inox, Magrat Road, Kapali and Prasanna theatres. Tickets are free and will be given on a first come first serve basis.

As part of the festival, film personalities who worked with the actor will be feted. Image: A scene from Aptharaksaka

Actor Shatrughan Sinha along with Vishnu's friends and actors Ambareesh and Sumalatha will participate in the valedictory function.

Apart from this, Vishnu's wife Bharti and her son-in-law, Anirudha will greet fans at Abhiman Studio, where the actor's body was laid to rest.

In the meantime, the producer of Vishnu's last film, Aaptharakshaka, is organising the film's success meet on the actor's birthday.

"We are holding the film's 25 weeks celebrations on that day," says Krishna Prajwal. 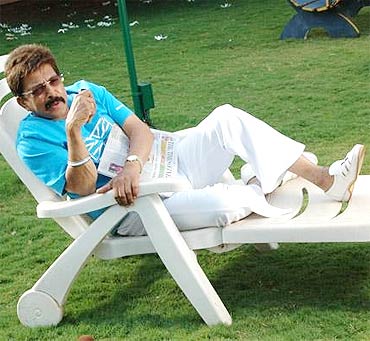 Political and film industry bigwigs are likely to participate too.

Telugu actor Venkatesh is also expected to attend. The film's cast and crew will be honoured on the occasion. It still remains to be seen if Vishnu's family members will take part in the programme. While family members say that they had just been informed rather than being invited, Prajwal maintains that his event is being held with the consent of Bharti.

"She said that she will try and grace the occasion as she is organising the film festival. Initially this programme was to be held in August itself. But as fans insisted that we hold the event on the late actor's birthday, it led to a date clash," he adds.

Prajwal also has plans to build a statue of the actor. We are yet to decide on the get up of the statue and the venue where it will be place. I am coordinating with his family members on this, he says.