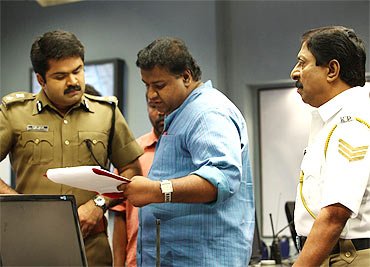 Image: A scene from Traffic
Meghna George in Kochi

Director Rajesh Pillai's Traffic, scripted by Bobby and Sanjay, has come as a whiff of fresh air in Malayalam cinema where spectacular films have become a thing of the past. The film got national attention with huge demand for its remake rights from various languages.

Pillai has been holding talks with several noted production houses in Bollywood and the latest news is that the production company Endemol will be making the Hindi version. Several well known names from the industry will be part of the film's cast.

The grapevine has it that legendary actor-director Kamal Haasan has shown great interest in making Traffic in Tamil. Discussions are still on regarding the cast and other details.

Kunchacko Boban is a love specialist Kunchacko Boban has been the popular loverboy, who stole millions of hearts, ever since he made his debut in Aniyathipravu in 1997.

The actor is an expert in romance even today. That is exactly what he is doing in his forthcoming film Dr Love, directed by debutant director K Biju. Bhavana and Ananya play the heroines in the film, which star quite a few young faces.

Produced under the banner of Jithin Arts, the shooting of Dr Love will begin next month.

Kunchacko Boban, who has become really busy after he made a sensational comeback into his winning ways, is currently facing the camera for V K Prakash's Three Kings and Vysakh's Seniors. Young hero Jayasurya will play the lead in Kunjaliyan, scripted by Krishna Poojappura and directed by Saji Surendran. The team had churned out two superhits in a row, Ivar Vivahitharayal and Happy Husbands.

However, the third film, Fo(u)r Friends turned out to be a dud at the box office.

In Kunjaliyan, Jayasurya is the kid brother of three sisters and they are very affectionate about him. Their husbands are not impressed by the brother-in-law but are in for a shock when he becomes really successful in life.

Jayasurya is currently shooting for T V Chandran's Sankaranum Mohananum, for which he will sport several different looks.