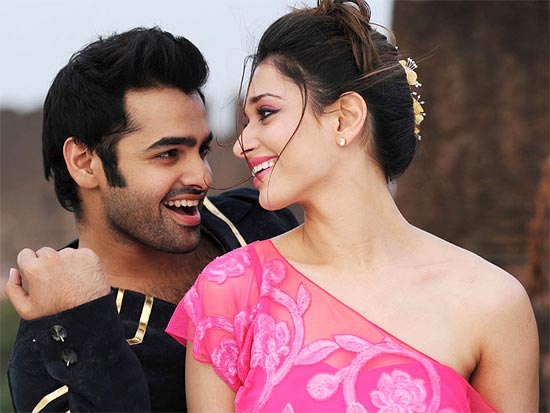 Image: A scene from Endukante Premanta
Radhika Rajamani in Hyderabad

Ram first tasted success with the Telugu film Kandireega, directed by Santosh Srinivas. Now this young hero is all geared up for a bi-lingual titled Endukante Premanta in Telugu, and Yen Endraal Kaadal Enben in Tamil.

The film also stars Tamannaah Bhatia and is directed by Karunakaran.

Yen Endraal Kaadal Enben marks the Tamil debut of Ram. Since Ram grew up in Chennai, he is fluent in Tamil.

It was first the director Karunakaran. I like his feel-good films.

He narrated the script and I liked it. So, an exciting director and script made me sign the film

What's the film all about?

It's a sweet love story with a complex plot that shows how selfless love is. It's a love entertainer with action as well.

Could you talk about the character you play?

I play a character who falls in love with a girl and goes all out for her and even forgets that he is a student who is just on the verge of passing out.

'There was double excitement since it was my first Tamil film' 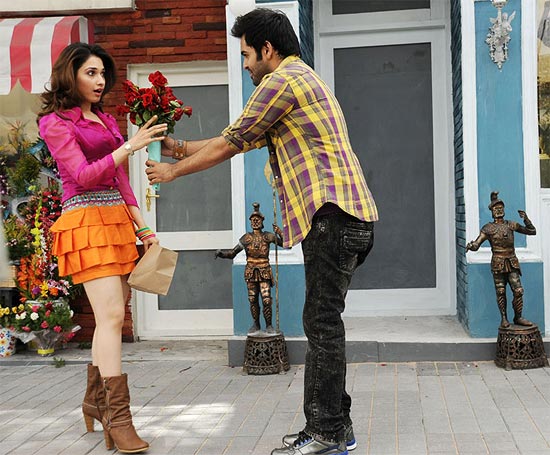 You are normally careful and methodical about your songs. What are you doing in this film?

There are four full-fledged numbers and two other songs. The director was good with concepts.

In the grand song I have tried something different and there is computer graphics involved.

One song was shot in Switzerland, one in Paris and one in a college. One song will be a surprise.

How was Tamannaah to work with?

She is very focused and interested in her job. She is a sweet and chilled out person.

Is the Tamil version the same as the Telugu one?

Some scenes are different. There is a slight change in my performance in Tamil. I have wanted to do a Tamil film for a long time.

Was there a sense of deja vu while shooting the same scenes?

Not really. Since we shot Telugu first there was excitement. There was double excitement since it was my first Tamil film.

'Director Karunakaran has a great sense of humour' 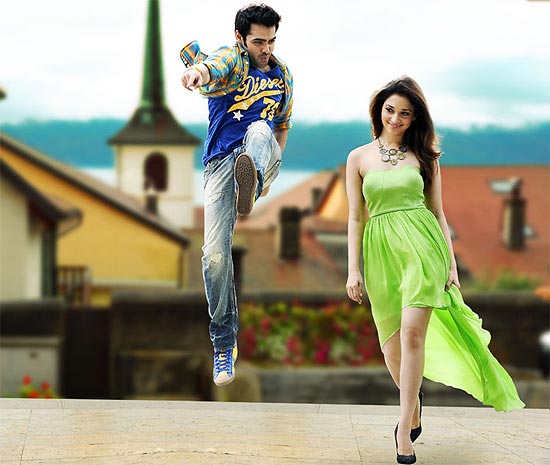 How was it working with Karunakaran?

It was lovely. He has no ego and a great sense of humour. He knows what he's doing and gives artistes complete freedom. He's very flexible and a lot of fun to work with.

You must be happy at the success of Kandireega...

Yes, I am very happy.

Why did you get out of the Gautham Vasudev Menon film Yeto Vellipoyindhi Manasu?

There were date issues. That was supposed to have been my Tamil launch.

Changes happened. Then I was cast only in the Telugu version. Later it was made into a tri-lingual with three heroes and I didn't have dates and Karunakaran's film was waiting.

Gautham and I are in touch. He has offered me another film. I'm yet to hear the script.

What other films are you doing?

It's a love story focusing on the relationship between father and son. The film has a mix of everything including action. A new girl Shubha Phutela is acting with me. I'm also doing a film with Santosh Srinivas (director of Kandireega).
Tags: Karunakaran , Gautham Vasudev Menon , Yeto Vellipoyindhi Manasu , Shubha Phutela , Santosh Srinivas
More
Write a
Comment
Print this
article