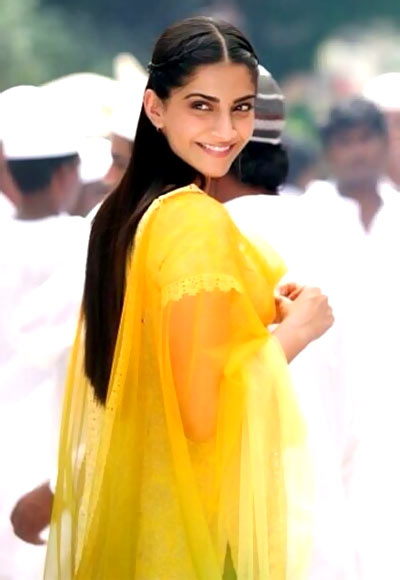 What sets Sonam Kapoor apart from other actresses is that she speaks her mind.

The svelte actress looked pretty in a floral dress when she settled down for an interview to promote her upcoming film Raanjhnaa.

In a frank conversation with Sonil Dedhia, Sonam reveals how she shamelessly copied Jaya Bachchan's character from Guddi in Raanjhnaa, what working with Dhanush was like, and admits to making some wrong choices.

You turned 28 last week and celebrated your birthday in Paris. What was that like?

Since the time I entered the industry, I have always been working on my birthday. When I turned 18, I was assisting Sanjay Leela Bhansali on Black. On my 21st birthday I was shooting for Saawariya and on my 25th birthday, I was doing Mausam.

I wanted to take time off with my girlfriends, have a great time and come back refreshed so I could promote Raanjhnna.

I first went to London with my five best friends. We shopped, ate, partied and had lots of fun. Then we went to Paris and attended Rihana's concert. I brought in my birthday at the concert with 80,000 people! It was quite incredible and the best birthday I've had.

What is that one special thing that you shopped for during this trip?

I like to pick up vintage clothes that are museum pieces. I went to a vintage store in Paris where I bought this beautiful black gown from the 1960s.

It is not really in a wearable condition as it is falling apart in a few places. I bought it as a collector's item.

'I have shamelessly copied Jaya Bachchan's Guddi character in Raanjhnna' 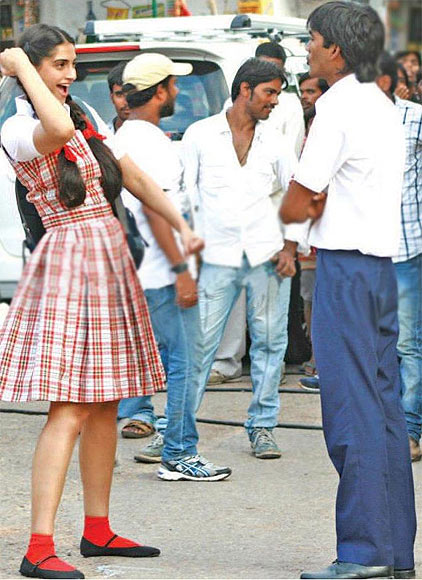 You mentioned in an interview that you have picked up nuances of Jaya Bachchan's Guddi for your character in Raanjhnaa. Did you meet her or have any discussions?

I did not meet Jayaji. I am a nerd when it comes to old films, old songs and old actors. I hardly know anyone of my generation who knows and has watched films like Bandini, Sujata, Guide etc.

My friends look surprised when I talk to them about these films. They all like Shah Rukh, Kajol, Salman Khan. My heroes are Waheeda Rahman, Nutun, Nargis, Jaya Bachchan and Rekha.

I have not played a school girl before. I was in a very conservative school where girls were not spunky so I couldn't take a reference from my school days. I needed a reference point for the film and this film of Hrishikesh Mukherjee caught my attention.

I had seen Guddi when I was 14. I revisited the film as I wanted to get that innocence and spunk in the character that Jayaji had played. I think she was just fabulous in that film.

I have shamelessly copied her in Raanjhnna. In the first 20 minutes of the film, it is all her work that I have copied.

Anand L Rai (the director of Raanjhnna) said you have been underutilised as an actor. Do you think directors have not tapped your talent?

I won't blame the directors. Unfortunately, 1980s cinema is back. A lot of films that are being made are hero-centric.

Films like Aisha, The Dirty Picture and Kahaani are trying to change that trend. So there is hope. As an actor, I hope I will be utilised more and directors will be happy.

'Abhay and I never had any problems' 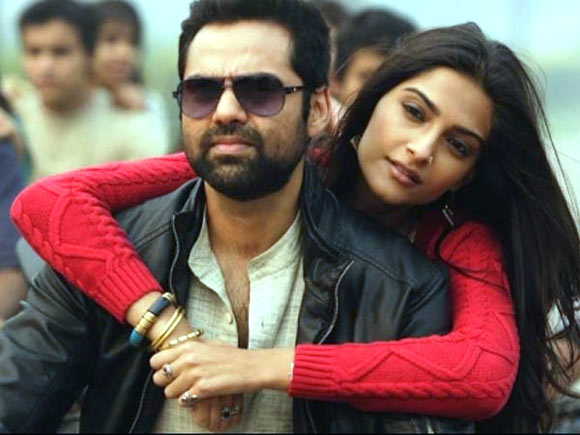 Did you have any apprehensions about working with Dhanush? Although he is a superstar down south, elsewhere he is just known as the Kolaveri guy.

I don't think like that. For me, it is always the script and my character that are important. The director, my co-stars, the budget are all secondary.

When I read the script of Raanjhnna, I really wanted to be a part of it irrespective of who my co-star was. I knew Anand L Rai would cast the right person.

You are working with Abhay Deol again after Aisha. Have the two of you patched up?

If I did not like him, I would not work with him again. Abhay and I have always been friends. We never had any issue. The matter was between Abhay and my father (Anil Kapoor) and PVR Pictures.

In fact, after watching some portions of Raanjhnaa, Abhay told me that we should do more films together. I think we have great chemistry and people love watching us on screen together.

We share a good relationship and I love working with him. We are constantly in touch and know what is happening in each other's lives.
Tags: Abhay , PVR Pictures , Dhanush , Aisha , Raanjhnaa

'I would like to work in a black and white film' 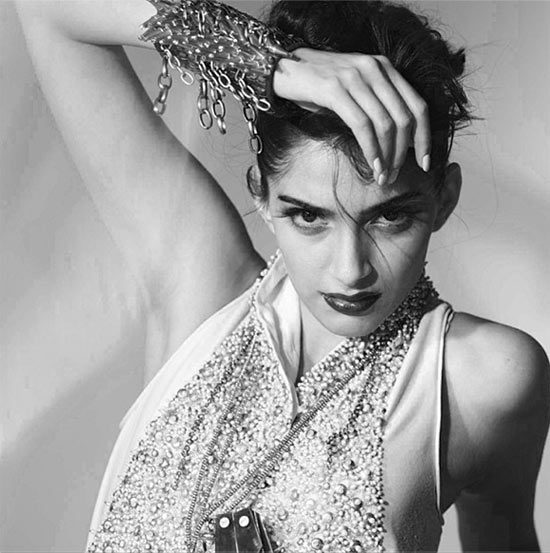 How romantic are you in real life?

I am very romantic in real life, so much so that when I meet a guy he never lives up to my expectations (laughs).

Yes, I do believe in it. There is an old song Acha Jee Main Haari from the movie Kaala Paani (1958). It is less of a song and more of an interaction between Madhubala and Dev Anand. That is the kind of romance that I really like.

In fact, I even told Anand (Rai) that I would like to work in a black and white film where I could sing such songs.

I think romance is coming back in films and I doubt it will ever die.

'I think I look good without make-up' 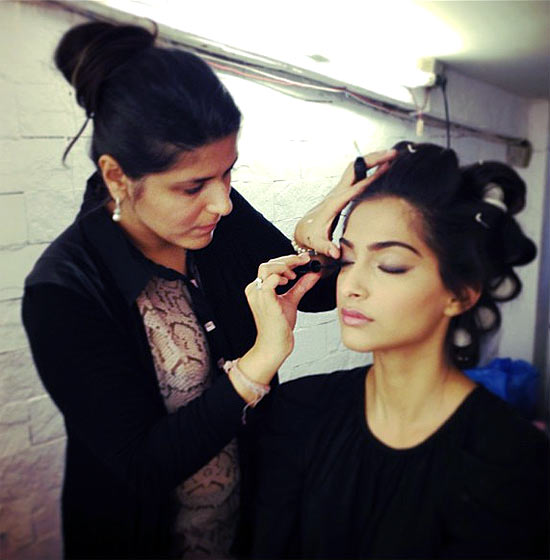 In real life you are known as something of a fashionista, but your screen roles are de-glam. Is that deliberate?

It's not a conscious decision to choose films like Ranjhaana, Bhaag Milkha Bhaag or Mausam where I play de-glam roles. I think because the characters are real, I need to be real. At the same time, there are other films like Aisha, I Hate Luv Stories where I am dressed nicely.

I think I look good without make-up. I don't like wearing too much make-up. I think people like me in de-glam roles and like the simple side of mine in films.

Since you are considered a fashion icon, is there always pressure to dress up all the time?

I love dressing up. I have a stylist, make-up and hair stylist with me all the time. I am a lucky girl. I am grateful for this life and for everything that god has given me. I am happy to do what I enjoy.

I may not be the number one movie star, and my films may not be doing too good, but I am grateful for whatever I have achieved so far. I have got a great family who always support me in what I do.

'I don't regret doing any of my films' 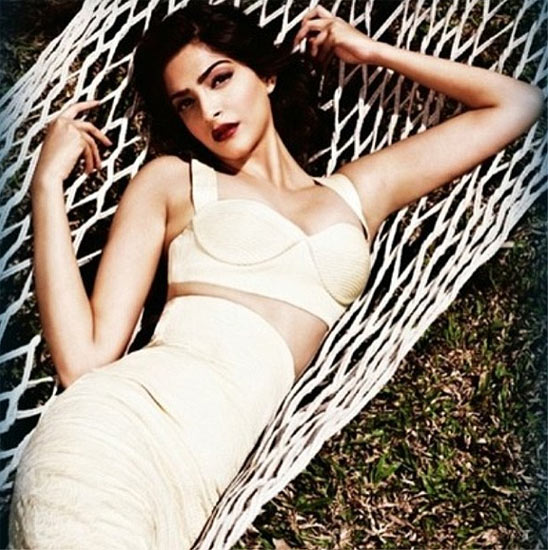 Did you deliberately decide to slow down on work after your films Players and Mausam didn't do well?

Yes. When shooting for those films, I was not very happy on the sets. I was grateful for the fact that I was working with some of the biggest directors in the industry. The most commercial film I could do was Aisha or I Hate Luv Stories and I realised that I wasn't comfortable playing these characters as I thought I wasn't convincing or good enough to play them. At that time, I took a conscious decision and stopped signing films. This was two years ago even before these films had released.

I was already in my mid-20s then and realised that I needed to be proud of the films that I do. I decided that I would only sign films when I was completely convinced. I told myself that the films might not have the biggest budgets and I might not be staying in the best hotels, but at least I would be happy with my work.

Fortunately or unfortunately for me, they didn't do well so it kind of reiterated my decision. Even if these films had become blockbusters I had decided that I won't do those kinds of films again.

Do you regret doing those films?

I don't regret doing those films as everyone on the sets treated me so well. It's a different experience where you are treated like a movie star and staying in the best hotels and the most exotic locations as compared to a film like Raanjhnna where we were shooting in real locations in Benaras for 70 days.

During the shoot of Raanjhnna my assistants would often ask me when we would shoot in an exotic location (laughs). 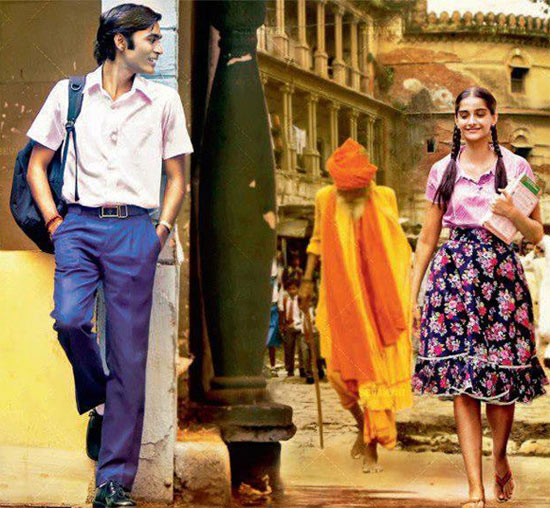 Is there anything that scares you about stardom?

I like everything about stardom. I don't mind being in the public eye. If anyone tells you that they want to be a film actor but they don't want to be a star, that means they are lying. I love acting and love the fact the people like both my work and me.

You mentioned that you have seen a lot of Hrishikesh Mukherjee films. Why did you decide on remaking Khoobsurat?

People of my generation don't know who Guru Dutt, Bimal Roy, Vijay Anand are. I have grown up watching the films made by these directors and always wanted to do something like their work.

Director Shashanka Ghosh had come to me with another film. I have always admired his work as he was the first person to make quirky films like Shotgun Murgun and Waise Bhi Hota Hai.

I had acquired the rights of Khubsoorat and I asked Shashanka if he would make it.

Initially he was surprised but later on he agreed. He told me we couldn't make the same film in today's day and age as that kind of lifestyle does not exist any more.