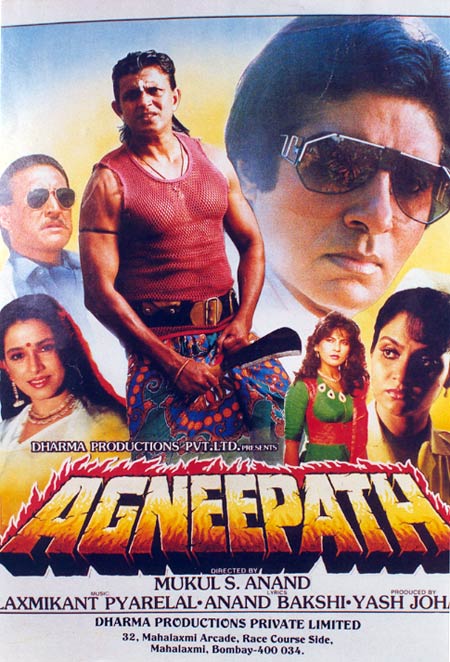 As Karan Johar's Agneepath gets ready for release, Sukanya Verma looks back at the original Amitabh Bachchan-starrer, which released in 1990.

The mere mention of Indian cinema's greatest entertainer conjures up too many movies, too many memories; it's like a giant montage of overlapping images.

Amidst a flurry of Jai, Anthony and Sukumars, there's an entire row of his best-known Vijays.

The taxonomy doesn't end here. Even among the latter, while not as distinguished as the Vijays of Zanjeer, Deewar or Trishul, is Agneepath's Vijay Dinanath Chavan. (It's Chavan, not Chauhan. There's much confusion over the spelling since it's pronounced as Chauhan throughout the film. Agneepath's end credits, I note, leave no room for speculation.) 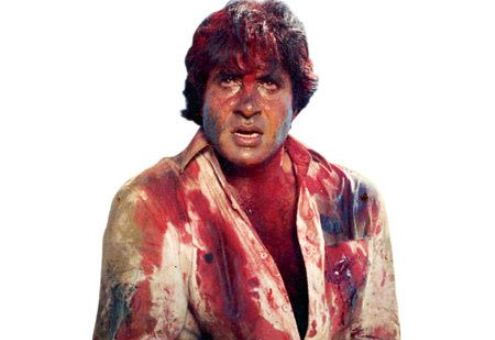 If nothing else, it certainly ranks among Bachchan's most-quoted introductions after Shahenshah.

Although in the same territory as Yash Chopra's Deewar -- wronged son taking to the path of crime resulting in a morality-driven rift between him and his righteous mother -- Agneepath is decidedly more brutal, with no attempt to sugarcoat the unpleasant reality.

And Big B's portrayal of the angst of an avenging son, complete with a gruff baritone and kohl-lined eyes, blends seamlessly into the visceral, exaggerated tone of Agneepath's mostly bloodstained content. 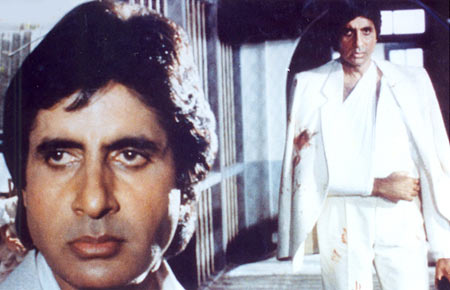 How else does one explain the success of the decidedly inferior and trite K C Bokadia potboiler, Aaj Ka Arjun, which came out in the same year?

I watched Agneepath as a school kid and found it too intense for my liking. Truth is I could never quite revere any movie that culminated with Big B dying on screen. It didn't matter then if he won a National Award for the same.

When I saw it again some years later, I had developed an appetite for the unsavory and noted a lot more favourable aspects to it. Like how Agneepath, which draws its title and purpose from Big B's father Dr Harivansh Rai Bachchan's compelling poem, is recited at the most strategic junctures of the story, its sleek camerawork (during the Mandwa and Mumbai slum sequences) and how spectacularly every scene unfolds.

Be it Sultanat, Hum, Khuda Gawah or this, Anand was incapable of thinking modest. His ideas demanded a grand, dramatic canvas, stirring the viewer into submission. 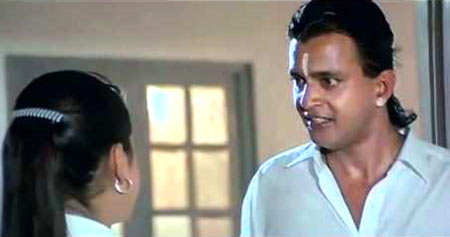 Agneepath, despite its amplified sentimentality, strong language and violence works on account of this very dynamism.

And while it seeks obvious inspiration from Brian De Palma's Scarface -- the restaurant scene, the dinner table discussion, the shoot-out within the police station -- Agneepath has an unmistakable desi soul.

Set in rural Maharashtra, it begins with a schoolmaster Dinanath Chavan's (Alok Nath) earnest efforts to reform the wayward villagers into model citizens. But his efforts to set up electricity in the rundown community evoke the wrath of drug lord Kancha Cheena (Danny Denzongpa) and he becomes a victim of a plotted sex scandal, leading to his disgrace and horrific murder.

The memories of his idealist father's blood streaming down the young Vijay's (Master Manjunath) face, his last words (Agneepath, Agneepath, Agneepath), a home set afire, a stunned mother (Rohini Hattangadi), a sobbing sister (Baby Tabassum) and a raging mob with scorn on their faces, leave an indelible mark on the young boy's psyche and he sails off to Mumbai, vowing to return and settle scores. 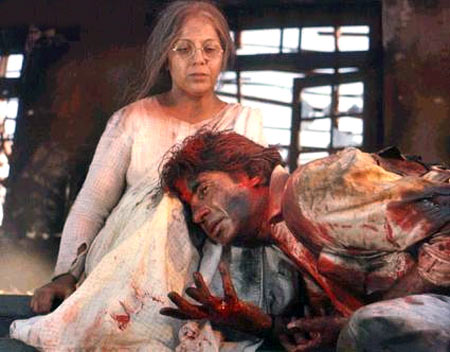 Wearing kohl in his eyes, changing his voice for effect and doing odd jobs to support his family, he soon succumbs to the uncontested Bollywood logic -- the only way to beat your enemies is become like them. He begins to work for the Amar Akbar Anthony of the crime world -- Shetty (Deepak Shirke), Usman (Avtar Gill) and Terelin (Sharat Saxena) since they share his aspiration to destroy Kancha Cheena.

Given the gritty circumstances woven around Vijay, the filmmakers felt a need to lighten the scene with Krishnan's clownish antics. On any other actor, the farce would have fallen flat, but this man is a livewire in his droll, over-the-top delivery underlined in a blown-up South Indian caricature. 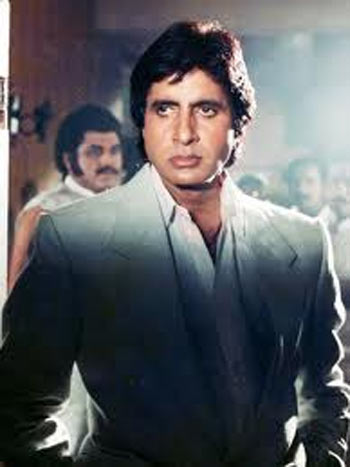 One of its most powerful non-Bachchan moments involves Mithun delivering an angry speech in Tamil, admonishing his community members for being mute bystanders to transgressions.

At the same time, his romance track with Vijay's sister, Shiksha (Neelam), is most expendable, resulting in little more than dreary, needless songs.

The other romantic track in the film -- the relationship between Vijay and his nurse, Mary (Madhavi) -- is also one of the most poorly developed sub-plots. It moves at a snail's pace, with a bland Madhavi playing dumb spectator, uttering not more than five lines in the movie.

Her presence is meant to reveal Vijay's softer, vulnerable side. This happens exactly three times, but the offshoot is one fabulous scene each: Whether he's clumsily conveying his desperation to be loved to Mary, imploring a doctor to save his mortally injured brother-in-law's life in a stuffy hospital or the climax when he convinces his perennially scathing mother how his entire existence has been a struggle to follow his father's school of thought, underscored by the poem Agneepath. 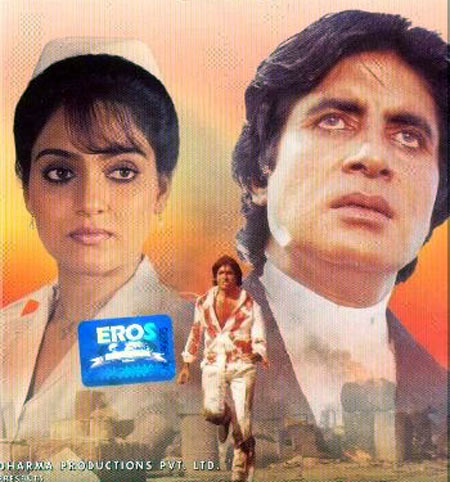 The action soon shifts to Mauritius and we realise the small-time Kancha is now a suave, sinister businessman.

Because he's played by the charismatic Danny, it's a character you quietly root for. In fact if it was the 1990s, one would openly suggest Vijay, on a subconscious level, admires Kancha's unruffled malice. This observation is validated to some extent during the song Ali Baba.

Mud, blood, cops, crooks follow as things begin to wind off hastily after Vijay marries, become a father and re-embraces faith (making way for the famous Ganpati visarjan sequence). Agneepath loses its steam around the last 40 minutes only to resume a high note with its grisly climax wherein Vijay at long last, finds closure.

But Bollywood's obsession with re-constructing beloved films and characters refuses to leave the angry young man in peace.

Twenty two years ago, Dharma Productions wasn't the brand it is today and Agneepath didn't quite get its due at the box office. Why else would the same banner, now helmed by Yash Johar's son Karan, give it a comeback with Hrithik Roshan and Sanjay Dutt playing the iconic Vijay Dinanath Chavan and Kancha Cheena, respectively.

Will it succeed, or will this be another Don (for some that is a good thing)? Some are curious. Some don't care. Still others think this might be better than the original.

I, for one, don't know. What I do know is that Agneepath succeeds in hosting a rare marriage of larger-than-life anti-heroism with graphic aesthetics. Can the new one beat that?