Raj Kumar Gupta on directing No One Killed Jessica 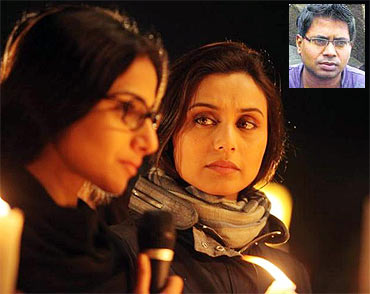 An assistant director to Anurag Kashyap in No Smoking and Black Friday, Raj Kumar Gupta rewrote the rules of success with his directorial debut film Aamir.

Now, he gears up for his upcoming thriller No One Killed Jessica starring Rani Mukerji and Vidya Balan. The film is based on the Jessica Lal murder case.

The director tells Sonil Dedhia why he took up such a controversial subject.

What made you want to direct this movie like this? The audience these days seems to be interested in either romantic or comedy movies.

I don't think people are only interested in comedy or romantic movies. The audience has become more mature. They are ready to experiment with different genres.

Secondly, I don't gauge the audience and then make a film. I give my 100 percent in the films I make. The rest depends on the audience. Fortunately for me, my first film Aamir worked well with the audience as well as the critics.

As for No One Killed Jessica, it will be wrong to call it a serious film just by looking at the trailers. It is as a very engaging dramatic film.

Did you think Aamir would be so successful?

Any filmmaker would like his film to be a success. I put everything I'd learnt into making it so there was a lot of positivity throughout the making of Aamir. Success and failure is not in my hands. All you can do as a director is to be honest with your work. When you are honest, it shows. 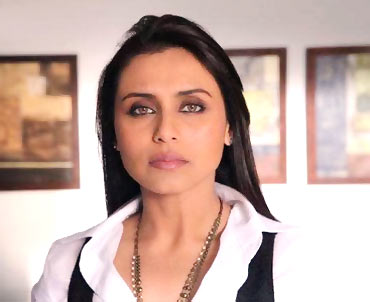 Why was there so much delay with your second film? Didn't producers line up outside your door after Aamir?

Bollywood is a funny industry. If you have one film that does well, you will get 15 people who would like to do the same kind of film. Why should I make a film that I've already done?

Also, I wanted to be sure what I wanted to do next. Since I write my own script, it takes a while to put everything together. At the end of the day, I would like to make a film that I want to do and not a film that producers want me to do.

No One Killed Jessica is not a biography or a documentary-drama. It is inspired by a series of events. When we decided to go ahead and make the film, I started doing research on the case. Once my research was over, I decided how much I wanted to fictionalise in the film. It is imperative that there is fair bit of dramatisation and fictional elements that come in. I wanted to reflect a very important change in the society while staying on to be a testimony of one of the most infamous court cases in our country. 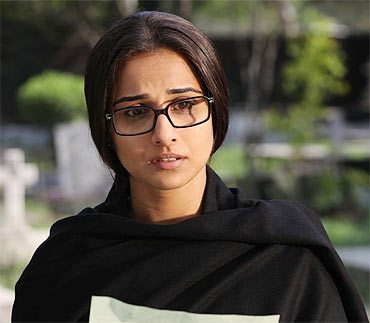 What made you select such a sensitive topic? What are the challenges of directing a sensitive issue like this?

As you rightly said, one has to be really sensitive about a subject like this. I had to examine various aspects of the case right from reading up on the case and doing my research, and then translating it and putting it on paper. I didn't want to make a biography. What I wanted to show is an emotional journey of a family in search of justice. So scripting the film was a real challenge.

Did you meet the Lal family or anyone related to the case?

I met Sabrina Lal (Jessica's sister). She has been very co-operative and helped us throughout the film. I wanted to know the personal space of the family in an ethical manner. I didn't meet Sabrina with an intention of understanding the case as anyone could read that in the newspapers or Internet. I met her to understand the lady who has shown so much courage and has challenged the system. I wanted the film to celebrate the human spirit that I had seen in Sabrina Lal.

Why was Vidya so upset about Sabrina acting in the film?

Those are all rumours. You can check it with Vidya. She was never upset about anything. One would have to wait and watch the film.

'I don't think there should be any cuts in the movie' 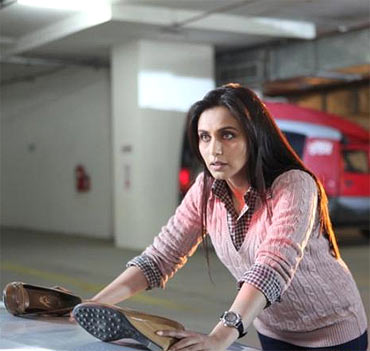 How did you finalise on Rani and Vidya? Why Rani? Does she still have a market value?

When I finished drafting the script and the characters, the names that always came to my mind were Rani and Vidya's.  They're probably the best actresses we have today. In the past, we have seen them performing serious roles beautifully. I narrated the script to them and they readily agreed to do it.

I never thought of Rani having a good market value or not. If that were the case, I would have taken some big star instead of Rajeev Khandelwal in my first film. I was always convinced about my actresses and never had second thoughts about them.

Are you cutting the scene where Rani shows her middle finger? Any other cuts?

There were objections to that particular scene. But it's unfair to comment on it as the scene was seen without context.

There was a film called Halla Bol, which was loosely based on the same story...

I have not seen Halla Bol so I cannot comment on the context or how film has been inspired from the case.

Has the film shaped up according to the way you wanted?

I guess it has shaped up beyond my expectations. As a filmmaker, you have a benchmark that you set for yourself. Even with my first film, I reached my expectations. I am just waiting for the film to release and get the reaction of the audience.

'We all know how crazy Delhi streets can get' 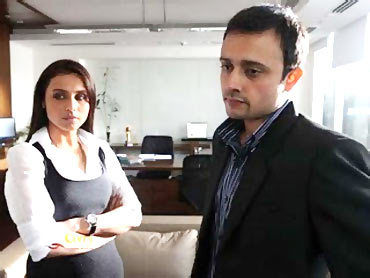 A lot of scenes have been shot in public places. How was the experience?

Most of the shoot happened outdoors. When you are shooting in a crowded area, you have to be very cautious as you don't have any control over the crowd. And we all know how crazy Delhi streets can get.

I remember a scene where Vidya had to travel from one point to the another in Delhi. Vidya was so engrossed in the shoot that she didn't bother with the traffic or the crowd. I still remember shouting at Vidya and telling her to take care.

Being a part of a sensitive affair like this always comes with its own challenges. What were the challenges that you faced while making this film?

The creative aspect is the biggest challenge. How much of reality or fiction should enter the movie, and then to balance both. I managed it to get it right while I was writing the movie. Also the canvas is so vast that putting everything together is difficult. Right from scripting to casting to direction, you have to be careful at every step.

In the past, a lot of films have been made on real life scenarios but haven't had a successful run at the box office...

As I mentioned earlier, it is not a documentary drama. It is an engaging film. As a filmmaker, you have a lot of tools in the form of emotion, drama, romance etc. I have also tried to work in this format and use these tools, and have come up with an engaging dramatic thriller.

Is serious cinema your forte? Would you ever come make movies in a different genre?

I am just one film old so it would be wrong to categorise me as a serious filmmaker. I would definitely make movies in different genres. In fact, I'm scripting a film called Rapchik Romance but it would be too early to talk about it.