Sign in  |  Create a Rediffmail account
Rediff.com  » Movies » 'The kissing scene was the best in Band Baaja Baarat' 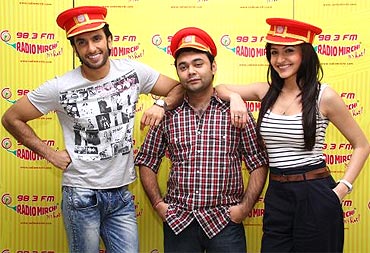 Band Baaja Baarat is one of the best-reviewed movies of 2010, and with much praise coming for the director Maneesh Sharma and cast, Ranveer Singh and Anushka Sharma.

Maneesh Sharma bagged the Best Debutant Director at the recently held Star Screen awards and Apsara Awards, and is clearly a talent worth reckoning.

Sonil Dedhia met up with the young director, and asked him how much his life had changed.

Band Baaja Baraat got a lot of positive reviews.

I am glad people loved my film and gave it such a positive response. One of the feedbacks I keep hearing is that it's a very refreashing film. It feels nice when eminent people from the industry appreciate my work.

But on the other hand, it makes my job even tougher because now the expectation is higher.

You won awards at the Screen and Apsara awards.

I never thought of making a film with awards in mind. Awards are a token of appreciation for your work, from the audience and the industry. I am glad I won the Best Debutant Director award. But let me tell you that there were far more deserving people in the same category.

How has life changed after BBB?

It's still the same. It's just that people have started recognising me and are appreciating my efforts. I want to be known for my work and I am glad that it is happening. 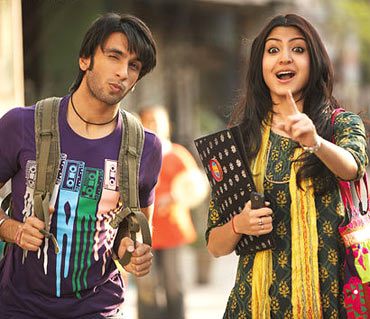 I am born and brought up in Delhi. I loved theatre and did a lot of plays during my college days. I directed plays as well. I decided to pursue filmmaking in my final year of college. So I went to California for a three-year course. It was a very enriching experience.

I was very clear that as soon as I finished the course, I would return to Mumbai and get some working experience. My friend was assisting Kunal Kohli in Hum Tum. She told me that Kunal was starting a new film, and was looking for assistant directors. I met up with Kunal, and started assisting him on Fanna.

You have been the assistant director for Aaja Nachle and Rab Ne Bana Di Jodi as well.

After Fanna, I took a break for three months and start writing. Then Aditya Chopra called me, and asked me to assist Anil Mehta in Aaja Nachle. That was the most amazing experience of my life. Unfortunately, the film didn't have a successful run and Yash Raj was going through a rough time.

Then Aditya called me again -- I remember the date, it was January 14, 2008 -- and told me that he directing a film starring Shah Rukh Khan. One can only dream of working with Aditya Chopra and Shah Rukh Khan together. What more could I have asked for?

'I didn't have to go through any struggle' 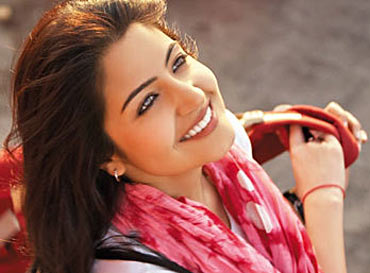 It seems you didn't have to struggle much.

Fortunately, I didn't have to go through any struggle even though I did not have a godfather. If you have the dedication and a one point agenda, it's not difficult to survive in this industry.

When did the thought of BBB come into your mind?

As I mentioned before, I started writing as soon as I finished my first film as assistant director. I had a seed of Band Baaja Baarat which I explained to Aditya Chopra during the RNBDJ shoot. Later, he had a clearer idea, and gave a nod for the project.

I found the spirit of entrepreneurship very exciting. I had a story in mind: Bittoo and Shruti want to do something big on their own. I wanted to show that nothing is bigger than passion and if given a chance, people would like to make their passion a profession. Initially, I wanted to showcase them as friends. But the script had to be twisted according to the need.

'I see Bittoo and Shruti all around me' 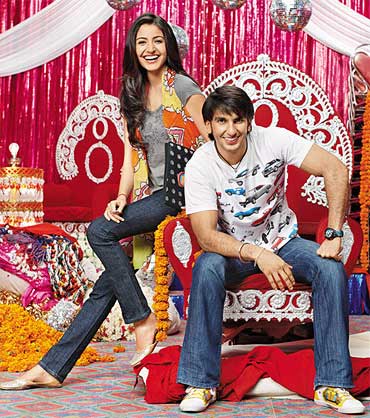 Why did you showcase a profession like wedding planning?

Things are changing in our society. Parents are letting their kids do what they want to do. They no longer want kids to become lawyers, doctors or engineers. Now, kids want to do something unusual like advertising, journalism, event management or wedding planning.

In the film, the character Shruti always wanted to be a wedding planner and her parents were supportive of that. What is interesting in the film is that these young entrepreneurs start offering their services to middle class people rather than going to high society people. There is a dialogue in the film: 'Maame chaache milke shaadiyaan karaan lete hain.' We wanted to show that young people can take up the responsibility of planning a marriage.

Yes, I see Bittoo and Shruti all around me. I think a lot of college kids and youth will be able to relate to them. I think these characters reside in every gully of this country.

The film highlights the aspirations of young India.

Yes. In the film, Shruti wants to become the best wedding planner in the country. Bittoo doesn't have any aspirations but he doesn't want to join his father's business. So he decides to join Shruti.

In the film, there is a dialogue where Bittoo tells his friend Mika: 'Uski (Shruti) feelings ko hurt nahi kar sakta. Aadmi banaya hai usne.' So now you see that Bittoo has an aspiration too.

'Making a film is a risk' 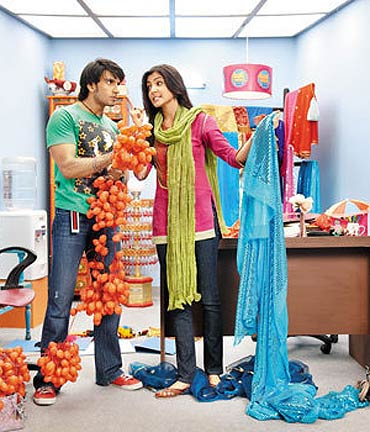 What made you cast Ranveer Singh?

During Rab Ne Bana Di Jodi, I got a message from him saying, 'Hi this is Ranveer Singh and I am assisting Shaad Ali. I would like to meet you.'

I was an AD then, how would I have been of any help to him? So I didn't reply back. After some time, when I started casting for Band Baaja Baarat, I wanted be very sure of Bittoo and Shruti. I wanted a fresh face for Bittoo's character. I had found my Shruti in Anushka Sharma.

Someone in my office asked me to look at a portfolio, which was Ranveer's. I looked at it, and said no. But the person insisted, so I took a screen test. That's when I realised I had found my Bittoo.

How was it working with Anushka Sharma?

Anushka and I go a long way. I have known Anushka from the day she auditoned for Rab Ne Bana Di Jodi. Once my script was locked, I was sure I wanted her in my movie because I couldn't imagine anyone else doing that role.

We have a lot of respect for each other. It was lovely working with Anushka.

Wasn't it a risk to cast a newcomer in the film?

Don't you think your film would have been a bigger hit with a known star cast?

It could have. But then it wouldn't have been a refreshing film. (smiles)

'I highlighted the places where I'd grown up' 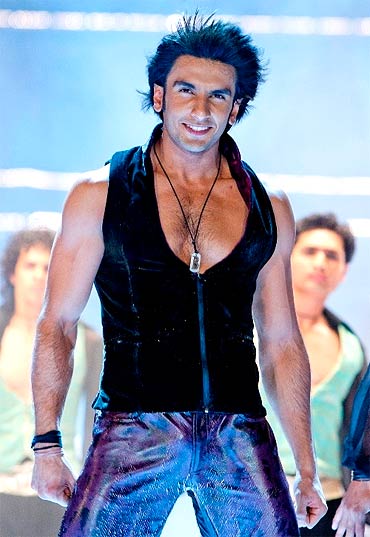 Tell us about your shooting experience.

Every director wants to highlight some of his personal life experiences in their first movie. So did I. The college scenes were shot in Hansraj College, where I had studied.

Shooting the song Tarkeebein was a nostalgic moment because I had done a lot of masti in college.

In one of the scenes, I have shown Ranveer and Anushka having tea and bread pakoda under a tree. That was the same place where I used to date. I wanted to be as natural as possible.

A whole new face of Delhi was shown in your film. Places like Janakpuri and Sainik Farms were not part of movies before.

Habib Faisal (writer) and I decided to show a different Delhi. People outside Delhi always think of India Gate or Chandni Chowk. I highlighted the places where I'd grown up.

Weddings are a huge celebration anywhere in the world but Delhi weddings have their own world. In BBB, you see the shaadis that happen at places like Janakpuri or Gobindpuri.

'I was very tensed when I went to the Censor Board' 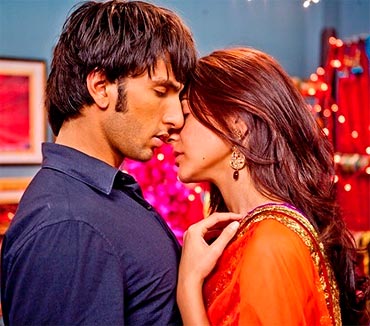 There is a kissing scene in the movie. Do you think kissing has become an important part of films today?

If the script demands it, why not? I feel that was the best scene in the movie.

The feedback that we have got was that it was shot esthetically and without any obscenity. The scene is right before the interval. U guess five minutes of pre and post interval defined the whole film.

Bittoo and Shruti are confused as they love each other and don't know what to do. What we highlighted in the scene was the sense of belonging between both of them. I guess it was one of the longest kissing scenes done.

I remember I was very tensed when I went to the Censor Board. They asked me if I would cut it shorter. I told them that I couldn't reduce it. Without any further argument, they gave the film a U certificate.