When Harry Tries to Marry, by public demand 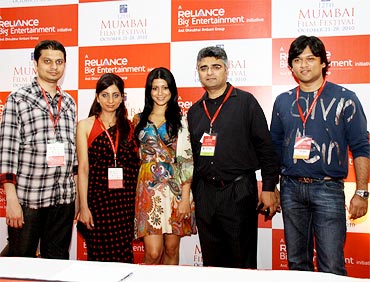 Indo-American filmmaker Nayan Padrai's is an elated state these days. And he has every reason to be. His debut feature film on cross-culture romance, When Harry Tries To Marry, premiers in the US theatres this Friday.

The English film has already earned accolades in its world expedition ranging from its premiere at the prestigious Austin Film Festival to the naturally remarkable script being included in the Top 10 of the Creative Screenwriting magazine competition.

The movie falls in an unusual genre of cinema. It could be aptly termed as an 'anti-romantic comedy' as the protagonist -- Harish Shankar, or Harry as he is known -- is not our archetypal American bloke who customarily drops by the trendy hot spots in town with promising blondes for company, pretty much unsure about the nature of the liaison.

Instead, Harry -- whose childhood comprised of hues of grey, with parents constantly at loggerheads -- grew up to have a much besmirched impression of a love marriage. So, with this belief etched staunchly within, he enthusiastically looks for an arranged association with the cultured Indian bride, and in his case -- it is the calm and sober Neeta, who herself is desperate to work it out.

As the film progresses, the director introduces us to a number of amusing characters right from the best buddy Louis -- who innovatively tries talking Harry out of his notions of an arranged marriage by demonstrating a coffee-choosing scheme to the father -- Deb Shankar, who being in an unusual yet tempting business of lingerie designing -- is battling his innermost demons.

Also, there is Theresa, who apart from sharing similar background, hitches with Harry, doubles up to his object of affection further complicating his dreamy marriage ideas, and there is the thoroughly entertaining fashionista mother who shows sophistication over Indian ethics.

What primarily clicks in WHTTM is the intriguing storyline coupled with the wit, alongside strong characterisation and earnest performances by the relatively novel cast. The transformation of Harry, where we see him from being logically enthusiastic for the possibility of his marriage strategies to getting cold feet while in action, is skilfully shown all complimented by the core traditions (including a garba sequence between the would-be spouses).

In the odd-span of 101 minutes, it is fascinating how the maker strongly converts the spectators into a part of the marriage proceedings, and also unknowingly arrests us into the perplexed mind-state of Harish.

As the climax approaches, one is entirely caught unawares as in a hilarious fashion the film closes and later Harry comprehends the many facets and multi-shaded nature of life discovering that two people cannot emotionally connect for all the wrong reasons. Image: The When Harry Tries to Marry poster

Talking about how the unfamiliar idea was conceived, director Nayan Padrai says, 'I wouldn't say the film is by any parameter a reflection of my life experiences or anything of that sort. It was just an idea I had and I penned it down."
But isn't a film, especially when it is your first, usually semi-autobiographical?
"Actually yes, when I was in high-school, strangely, I always wanted to get married, although unlike Harry's, my parents weren't divorced," he confirms my suspicions. "The message of the film lies in the fact that one should not get married for the wrong reasons," he adds, touching on the social context of the films' premise.
"As a first-time filmmaker, barriers are inevitable. And they may emerge in any unforeseen form." He pauses for a fraction before he assures, "We never faced any kind of barrier in New York since we were under budget, under schedule as well as under film stock, so we were doing pretty well. But in India, we had a massive crew going to Kutch in Gujarat from Mumbai and USA, and we had very limited number of days to film our scenes, so you could say we faced a time barrier," he says stressing on how vital those particular days were.

Hailing from a media background that consisted of him working in the radio and the advertising industry, I further investigate as to how much it came of aid in preparing him for his first feature film. Not seeing much of a relation, he dismisses my query, "It is only the business background that did help in the marketing angle and to a certain extent, strategising. Otherwise, a feature film is a very different animal. Nothing can prepare you for that. When I went about WHTTM, I almost erased everything I knew and just applied common sense," he reveals what he did for homework.

"More than anything, I wanted that the people with whom I would collaborate to be the right ones. People whom I could bring on the same page as me," he adds seriously. So didn't years of involvement in an interlinking industry count here?

"Yes, here the experience counts because then you know what kind of people you want around you. I didn't want any kind of yes-men. I wanted people who could constantly challenge my thoughts, ask me questions, and make some valuable suggestions," he apprises adding, "I'm a very feedback driven guy. Although ours was a very award-winning script, I was ready to add a little, make changes, and improvise if any person on the sets made a suggestion."

Well, that certainly speaks volumes as a director in an industry where ego clashes overshadow any input that could potentially benefit the overall body of work. He further explains, "In this field, you cannot be stubborn; you've to accept certain opinions. Of course, ultimately I took decisions which I felt were right, but the thing lies in being open to ideas. I did have certain clashes with my co-writer, but they were very healthy and were all for the betterment of the story," he agrees with the inevitable that individuals come across in any creative process.

Pushing forth the question as to when can the general audience get to see the romantic comedy of not falling in love, Nayan informs, "We are looking for the right kind of buyers and distributors who feel as passionately about the project as we do."

'People are not going to forget the movie' 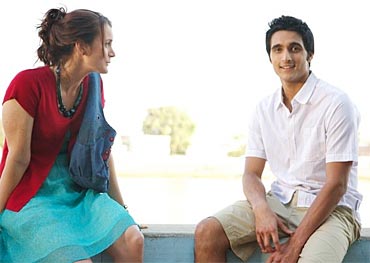 Image: A scene from When Harry Tries to Marry

Pleasantly shocked post the screening, I was in two-minds as I could see a staunch commercial drama unfold that was so not on the lines of the otherwise philosophical art-house cinema that a majority of film festival comprise of.

Agreeing to this with an enthusiastic tone, Nayan narrates, "I feel it's a film with which majority of the people can relate to. It addresses subjects like divorce, falling in love, being happy et al. These are general things that cater to both the Indians and the NRI audiences alike."

In a country like India which is largely star-driven and top-notch actors add to the seductive packaging, how difficult it is to brand a film that doesn't really boast of an ensemble of stars? The director directs me to producer, Sheetal Vyas, who is keenly attending to our thoughtful conversation.

"I think India also functions heavily on the word-of-mouth publicity. Yes, the first thing we are asked is who is in our cast. But after watching the movie, they are like, 'Wow, it's a great film, stunningly shot and beautifully directed.' Also the cast gets appreciated. So I feel it's the direction and the content that matters more than anything," comments the enthusiastic producer who like Nayan is venturing in the territory for the first time.

Here, the director shares a diverse point of view, he brings to notice, "See, there are two things. One -- the star makes the movie, other -- the film makes the movie star. In our case, I would like to believe that Rahul Rai (who plays Harry) and other people from the cast are going to become huge stars," says the optimistic filmmaker with a smile.

Ask him where he thinks the USP of the film lies, Nayan feels it is the recall value of WHTTM. "I can't say about the short-term, but in the long-term, people are not going to forget the movie," he says.

"The core of the movie lies in the fact that whoever was in the project was not in for the money. They were passionate about the project and believed in it," he shares candidly adding, "When you make a film with genuine emotions, it shows. The kind of reaction we are getting at the festivals is very encouraging."

Positivity is the common vibe that the makers have sensed so far and that has certainly taken their assurance to a higher level.

'I went into depression after watching 3 idiots' 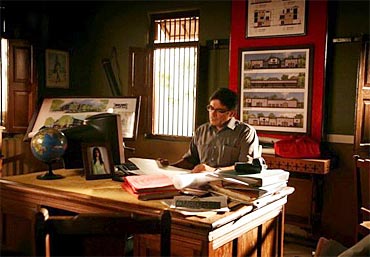 Image: A scene from When Harry Tries to Marry

Circling in the entertainment capital of India, I abruptly question the director-producer duo, whether they are acquainted with Bollywood.

"I think Bollywood films are total entertainers. You go inside for three hours and you forget the world outside," acknowledges Sheetal.

She goes on, "When you go to watch a Bollywood film and that too in a theatre like Chandan, where you can stand on the seats and join in the fun, it is amazing. Such things happen only in India. Your brain doesn't get stressed while watching a Hindi film like it gets in Inception," confesses the producer with candour.

Curiosity gets the better of me as Bollywood enters the arena of our chatter. I push more to extract which Hindi film has largely influenced the debutante. Without any qualms or being overly diplomatic, Nayan admits frankly, "I went into depression after watching 3 idiots. How can you make such a brilliant, commercial, emotional, funny, consisting of almost every element! It is such an amazingly well-told movie. I am a huge admirer of Rajkumar Hirani."

Knowing that now it was time, I better proceed towards the exit. I conclude by asking the director, how content he is from the Mumbai Film Festival.

Taking a deep breath, Nayan seems extremely pleased by the MAMI inning, "I am very satisfied. It was a great way to test the audience reaction. We had a great first screening as the closing night film of the Film India Worldwide section, and also the fact that the festival decided to give us a second screening the next night added to my happiness.

"I think the audience here laughed at pretty much all of the same places as the audience in Austin Film Festival so it tells us the film has a universal quality. Also, I met so many festival goers in the day after the screening who all were "relieved" to see a commercial, mainstream film in the festival. It's funny, how people think if your film is in a festival it may not be commercial. Well ours is a mainstream film and hopefully a proper release will happen."

And that certainly will, Mr Director.