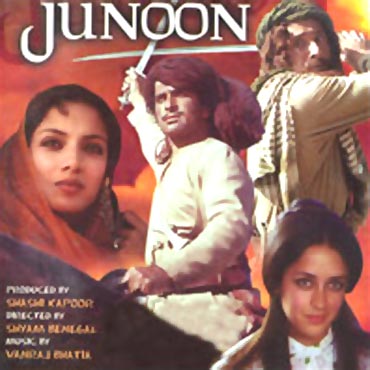 Image: A scene from Junoon
Raja Sen in Mumbai

There are some actors who can do absolutely anything.

Today, we celebrate a man who has always been able to carry off anything with style, from bombastically delivering triple-barrelled echoes of masala movie revenge to dancing spectrally in a photo frame, from being a conventional, even muscular action hero to playing a Bollywood-besotted autowallah, from a drunken cricket coach to a man with a bomb, from a profane don to the father of the nation.

Spoilt for choice given his magnificent, prolific filmography, I humbly and debatably pick my 10 favourite Naseer performances, in utterly random order:

Shyam Benegal's startling drama set during the revolt of 1857 saw Naseer as the fanatic Sarfaraz, desperate to fight for India's freedom.

Wearing bloodshot eyes and slashing priests in half, Naseer screeched out his loaded lines, his polemic punctuated by sheer passion. 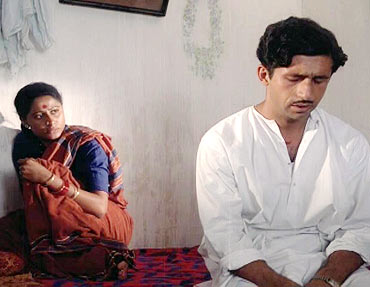 Image: A scene from Nishant

In his very first film -- another Benegal project with lines by Satyadev Dubey -- Naseer stood out immediately, despite a heavy-duty cast of veterans.

Shah played the reticent Vishwam, a man too shy to acknowledge how deeply he has fallen in love. 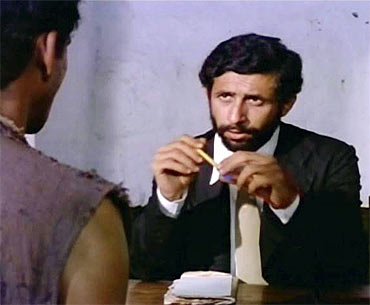 Image: A scene from Aakrosh

A scathing indictment of the legal system in India, Nihalani's film gave Om Puri and Smita Patil the key roles but it was Naseer's flawless lawyer routine that truly stole the moment. 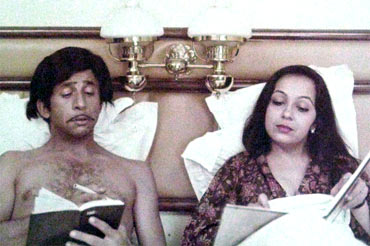 Saeed Mirza's heartbreakingly funny film about the legal system featured Naseer alongside Satish Shah as a pair of devious lawyers exploiting a couple of aged clients.

Shah, always the good guy upto this point, is a revelation as the foxy, silvertongued rascal. 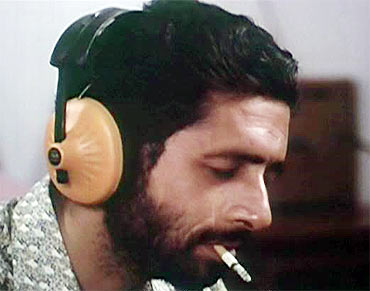 Image: A scene from Sparsh

Sai Paranjpe's 1980 romance featured Naseer in one of his most acclaimed roles, that of a sensitive, independent blind man who falls in love with a young, pretty widow.

It is a sensational performance, stark and powerful, and the credibility the actor brings to the character is phenomenal. 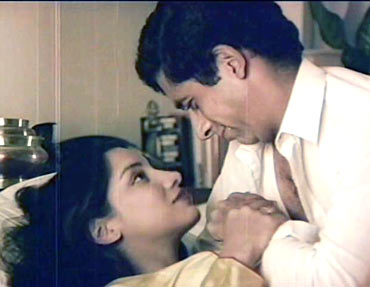 Image: A scene from Masoom

Shekhar Kapur's directorial debut might have been a retelling of Eric Segal's Man, Woman And Child, but his film had better performances than any English version.

Shah played DK, an affable adman whose idyllic life is shattered by the news of a love-child. A highly nuanced performance, Naseer's incredible mastery of mood is what keeps the film grounded. 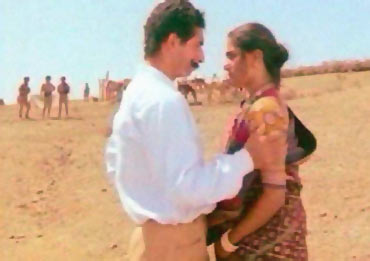 Image: A scene from Mirch Masala

In this unforgettable Ketan Mehta film set in colonial India, Shah played an abusive and barbaric tax collector, treating the villagers like livestock.

Naseer brings a revolting degree of sadism and lust to his part, creating a character who gets under our skin and provokes actual hatred. 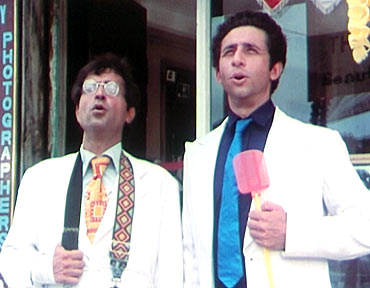 Image: A scene from Jaane Bhi Do Yaaron

This cult Kundan Shah classic from 1983 remains the country's only unanimously acclaimed black comedy and Shah was stellar in the lead role of ambitious photographer Vinod Chopra.

From hitting on his unscrupulous editor to slapping a municipal commissioner to playing Duryodhana on stage, Naseer was arguably the sanest character in a wild pack, burdened by the conventional 'hero' role in a farce breaking all boundaries. 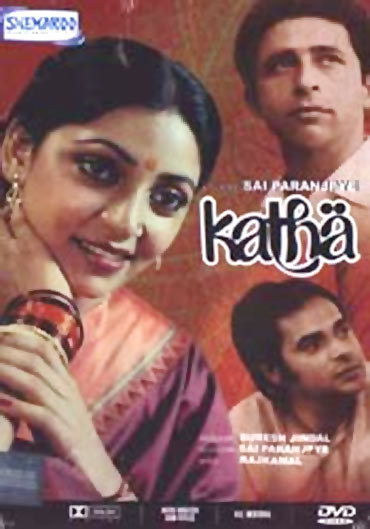 Image: A scene from Katha

Sai Paranjpe's comedy saw Naseer in the role of Rajaram Joshi, a hapless junior executive living in a Mumbai chawl.

Farooque Sheikh plays a domineering charmer who lords over him, and Naseer's Joshi, too meek even to confess his love to a neighbour, plays off him beautifully, both actors using their highly contrasting characters to create a dysfunctional, quite stunning chemistry. 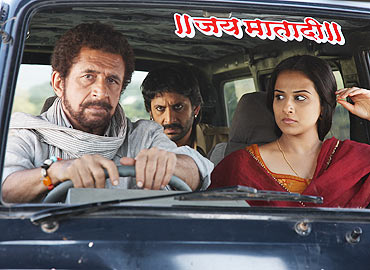 Image: A scene from Ishqiya

In my opinion his finest performance in the last two decades, Abhishek Chaubey's Ishqiya has Naseer as the irrepressible Khalu Jaan, a character both romantic and world-weary, both a dreamer and a doer.

His attempts at flirting are laudable, a desperate conjuring up of old-world charm, and when he nods off in a bus surrounded by women, women taken in enough by this man's inevitable charm to gape at him, the actor shows us just how magical he still can be.