Sign in  |  Create a Rediffmail account
Rediff.com  » Movies » Vivek Oberoi: I am making my re-debut with KLPD

Vivek Oberoi: I am making my re-debut with KLPD 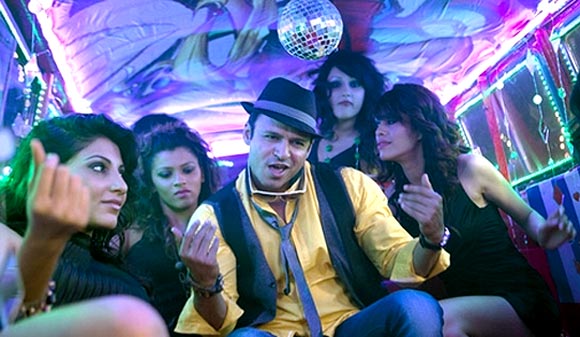 Completing a decade in the industry and with as many as nine films in the offing, including Kismat Love Paisa Dilli (KLPD) which releases this week, Vivek Oberoi believes that he is in the best phase of his career. In fact, he claims this is his "re-debut" into films.

In conversation with Sonil Dedhia, Oberoi talks about his film KLPD, future films and the best thing that has happened to him.

You have been acting for a decade but you have very few films to your credit...

I have done 31 films in 10 years and right now I have nine films in hand.

Apart from Kismat Love Paisa Dilli, there is Jayanta Bhai Ki Love Story, which is about a goon falling in love, Sher set in the 1960s based on gold smuggling, and Zilla Ghaziabad which is an out-and-out action film.

In Krrish 3, I play a super villain and then there is Grand Masti. I am doing one film with Balaji and another with Tips.

I am doing good work and enjoying it.

How do you feel when you look back at your career?

I don't look back. There is so much to look forward to so why should I look back?

Ten years in the industry has taught me a lot of things. This is like a re-debut.

Maybe in the year 2022, I will make another re-debut. I just want to do films that I like and to enjoy my work.

'I was tired with continuous working' 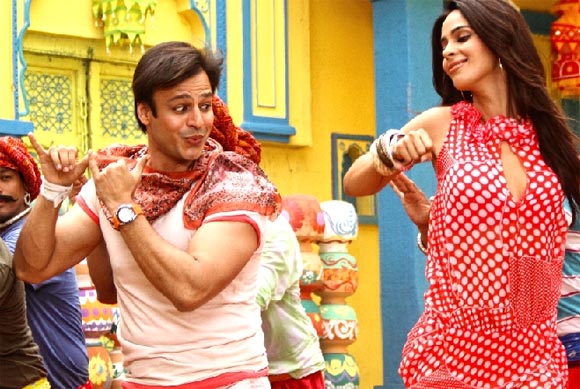 Your last film, Rakht Charitra, released two years ago. Was the break intentional?

Yes, the gap was intentional and so was the spurt of films.

I was tired with continuous working. For Rakht Charitra, I had to gain and lose weight. I simultaneously shot the film in three languages -- Telugu, Tamil and Hindi.

I was tired, I was not enjoying it. I took a break and got married. I promised my wife to take her on a honeymoon every month. I took her to London, Paris, Turkey, Lakshadweep, Thailand, Singapore, Sri Lanka and other places.

I relaxed for a year and then started reading scripts. I was feeling fresh and wanted to do different kinds of films.

What is Kismat Love Paisa Dilli all about?

It is a comic thriller and it's really been a fun ride. We have used the language that the youth uses today and have approached certain issues that trouble them in a fun way.

We have tried to tap current issues in a satirical manner. The film is about what can happen with a guy in one night in Delhi. 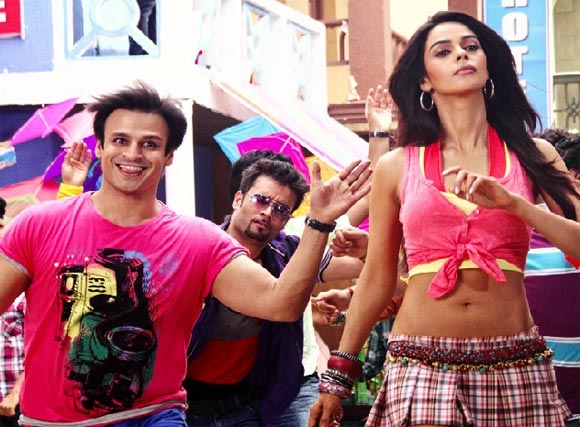 What's your role in the film?

I play an ordinary guy who is cheap, naughty and a typical over-excited Delhiite but his life changes in one night.

I was very nervous because I had not done this kind of role earlier.

I had to play a 23-year-old guy who gets excited if a girl smiles at him. He fancies a lot of girls.

I hadn't spoken typical Delhi language before -- the lingo that guys usually talk. I spent time with Delhi University and hostel guys to learn their vocabulary and start talking like that.

Are you apprehensive about such a role getting accepted by audiences?

I am very nervous because I have not done this kind of role earlier. The funny thing was that when Ek Chaalis Ki Last Local was offered to me, I felt the script was too forward, wild and different. I was scared and I had asked the director Sanjay Khanduri to change certain things.

He told me he would love to do the film with me but without changing any scenes.

I was impressed with his conviction in the script. After he made the film, I saw it and really liked it. I called him to say it was a good film and it was an error of judgment on my part to not do the film.

I had told him that whenever he writes a script and thinks of me I will be ready to do the film. So he came to me with this film, Kismat Love Paisa Dilli.

He told me not to think of my image as it is a fun, crazy, and wild film. Leaving behind the failure and success that I have achieved I felt like doing something different.

'My life changed forever after I met my wife' 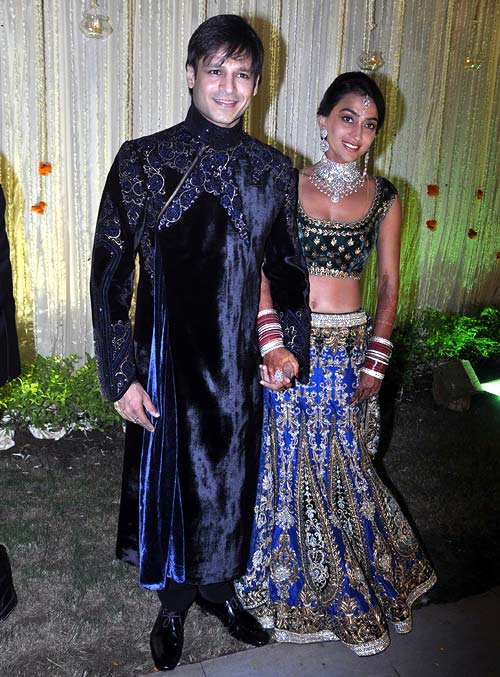 In the film, an incident suddenly changes your life in one night. Have there been any incidents in your life that have brought about significant change?

There have been two extremely important days in my life. The first one was the day I auditioned for Ram Gopal Varma for my first film, Company.

I was really nervous. I actually got into my character Chandu Nagre, walked into his office and spoke to him like a bhai. I started smoking a bidi and started behaving completely like my character in the film.

On the personal front, it was the day I met my wife that changed my life forever. It added a new dimension to my life and set my priorities straight.

Do you consider this the best phase of your career?

I have never been so mentally sorted, relaxed and happy. I have my wife to thank for that. The day I got married I felt there is so much more to life.

Now that I am going to become a father, the excitement is at its highest. I want to take her out for a Babymoon now, a romantic holiday while she is expecting!
Tags: Ram Gopal Varma , Chandu Nagre , Babymoon

'I am playing India's first super villain in Krrish 3' 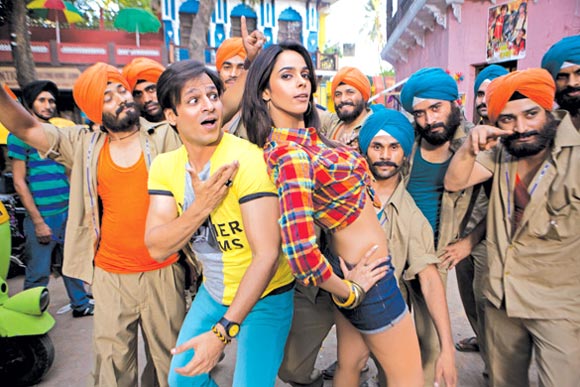 You play a villain in Krrish 3. Tell us something about it.

I am not playing a villain: I am playing India's first super villain in the film.

But Arjun Rampal has already played a super villain in Ra.One.

I don't know about others. I just know that I am playing a super villain (smiles).

I love villainous characters; they are so exciting to play. They are so different and challenging.

In the past, my roles have had shades of grey but this character in Krrish 3 is completely black. I love it.

Audiences will get to see a different side of me. I must say that Krrish 3 is the role of a lifetime, that of a twisted villain. I had fun doing the film.

How was it working with Hrithik Roshan?

Hrithik is such a cool guy. We grew up together. We used to cycle together when we were kids.

With Krrish 3, we were bonding all over again. We used to hang out, go to the gym, have dinner together. Even when he was not shooting, he used to come on the sets just to hang out, to help me with the body language and scenes.

'Ranbir in Barfi! has done what every actor dreams of doing' 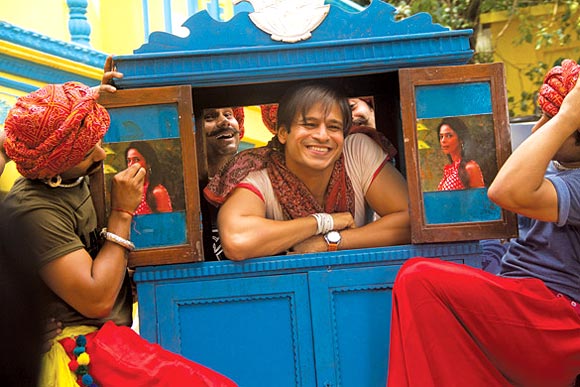 You produced Dekh Indian Circus. Will you produce more films in future?

I think I will produce as many films as I can. The films that I like to make are small and different. Whenever I can, I will support such films.

Will you act later in the films that you produce?

There is no plan for that. If somebody asks me to back it and if I like it, then I will produce it. My idea is to keep supporting talented people.

Is there any film you've seen recently that you would have loved to be a part of?

Barfi!. It was such a beautiful film, hats off to the entire team.

I have a lot of respect for Ranbir (Kapoor) as an actor. He has done what every actor dreams of doing.
Tags:
More