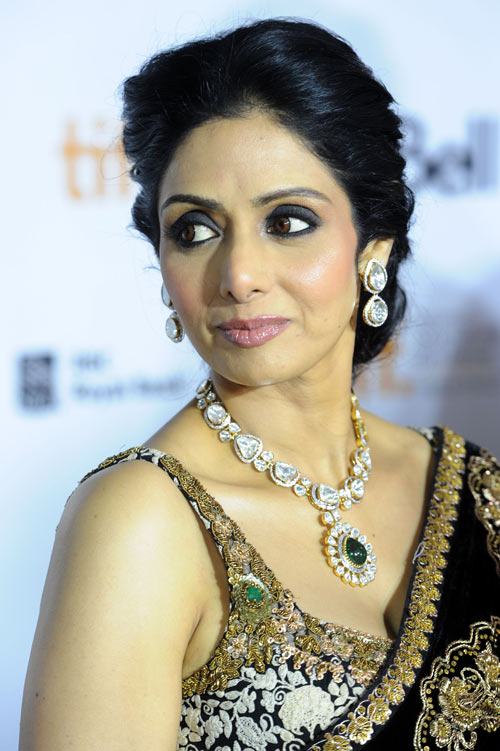 It's hard to believe that it was 15 years ago when we last saw Sridevi on the big screen. It's like she hasn't aged at all.

The actress, who makes her comeback to the silver screen with Gauri Shinde's English Vinglish on October 5, insists that it is her debut film, not a comeback.

She looks particularly fresh and radiant as she arrives for the interview. I can't help but ask her about the secret behind her glow.

She says, "Love gives me the energy. There is no secret; whatever you are inside will reflect on your face. Just be happy and positive. Just look for the basic things every morning. You have to be happy from within and enjoy."

In conversation with Sonil Dedhia, Sridevi explains the reason behind her long haitus and reveals what prompted her to get back to films.

You are back on the silver screen after 15 years. Why such a long break?

I ask the same question: why 15 years? (laughs). I wish Gauri (Shinde, the director) had met me before; I would have done this movie at any given time.

My fans used to always ask me, 'When will we see you?' I am so glad and thankful to my fans that I was always there in their hearts and they never forgot me.

Did you miss acting?

No. I was happy to spend time with my children and my husband. I was enjoying motherhood.

At the same time I never lost touch with films. As a producer's wife I was happy being behind the camera. I would often go on the sets to watch a shoot. 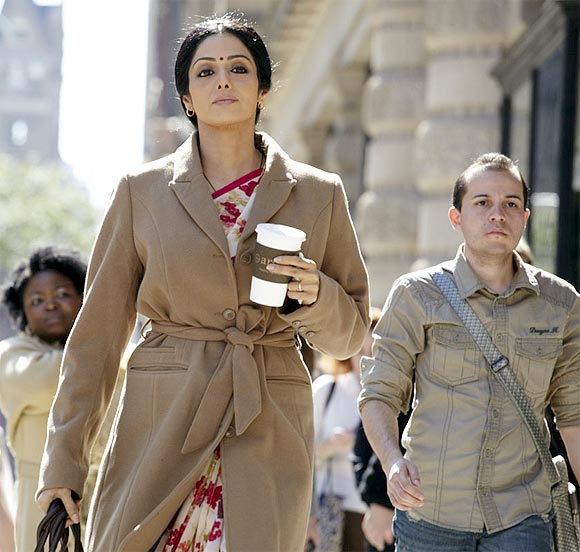 How does it feel making your comeback with English Vinglish?

I don't think this is my comeback. I consider this as my first film.

When I went to shoot for the film I felt like I was shooting my first film. I felt like a newcomer.

Gauri made me feel so comfortable that I never felt like there had been a gap of 15 years.  It felt like I was shooting the day before yesterday and I just took a break and came back.

Were you comfortable facing the camera after 15 years?

I am very aware of the changes that have taken place in the industry. I am a producer's wife and I have seen the growth that has happened.

I was quite comfortable when I started shooting for the film.

Why did you choose this film?

Little things like having a small family with two children and a husband was very relatable.

'My best is yet to come' 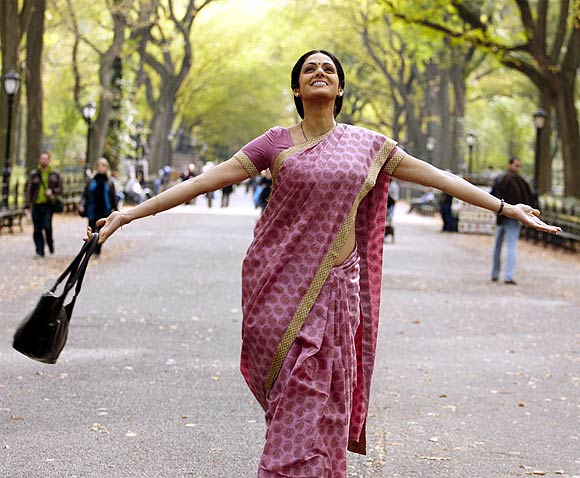 Did you want to get back to acting?

If I hadn't got the script I might not have acted in films. I didn't make a conscious decision to come back.

If I had got this script five years ago, I would have done it. The simplicity and the sensitivity of the subject really appealed to me.

Didn't you get any offers in the past 15 years? We heard that your husband Boney Kapoor was keen to produce a film for you.

Yes, he wanted to produce a film for me. I did hear a few scripts but nothing really excited me.

There was no script that made me want to leave my family and my house to go and act and spend the whole day in the studios.

Can we see you more often in films now?

Yes, absolutely. I would like to continue working in films. If good scripts like English Vinglish come to me I would love to work more.

I am glad that I am in a position to select scripts I would be comfortable working in. I think I have not done much as an actor. There is no end for an artiste.

My best is yet to come. There are more creative characters to play. 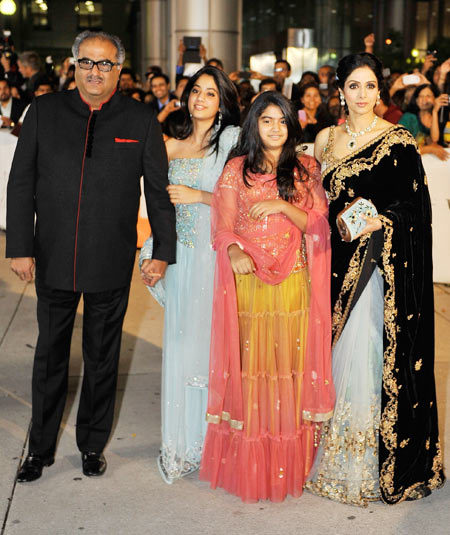 I am really touched and honoured. We got positive reactions at TIFF. When the movie finished and people started applauding I was numb for 10 minutes.

It was a memorable moment for me and of course I was really moved seeing the reaction. I will cherish that moment for life.

How has your family reacted to your performance in the film?

They really loved my performance. We all saw the film at TIFF.

My daughters (Jhanvi and Khushi) watch my films on television but this was the first time they were watching my film on the big screen. My daughters are really proud of me.
Tags: Toronto International Film Festival , Jhanvi

'I am in awe of Hrithik Roshan; Salman is a superstar' What do you think of the current crop of female actors who are experimenting with their choice of movies?

There are very talented actresses in our industry today. It's really amazing to see the new crop of actresses take up challenging roles.

I loved Vidya Balan's performance in The Dirty Picture and Kahaani. Rani Mukerji was amazing in No One Killed Jessica.

There are different kinds of movies that are being made today and the filmmakers and actresses are willing to take chances and do something different.

How about the male actors?

I am in awe of Hrithik Roshan. He is so fabulous. He is like an all-rounder. I think he deserves to be in a Hollywood film.

Shah Rukh Khan is a great charmer. My husband has worked with Salman Khan and he is a great human being and a superstar.
Tags: Hrithik Roshan , Salman Khan , Rani Mukerji , Vidya Balan , Dirty Picture and Kahaani

'As a mother I want my kids to get married soon' 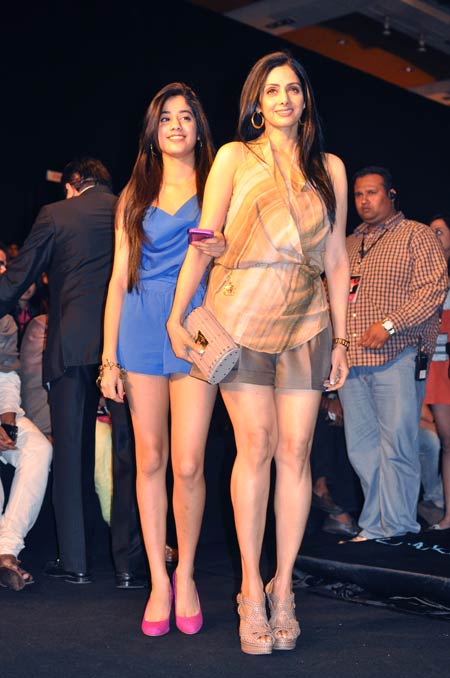 We constantly hear reports that your elder daughter Jhanvi is planning to get into films...

It is too early for her to get into films. She comes along with me to various events as my daughter and a friend, but that doesn't mean that I am trying to push her into films or she wants to be in the limelight.

It is very unfortunate the way the media has hyped the whole situation. She is still studying and at this point of time I would be the last person to get her into films.

Has she ever told you she wants to be in films?

But as a mother I want my kids to get married soon.

'I would like to work in the remake of Mother India' 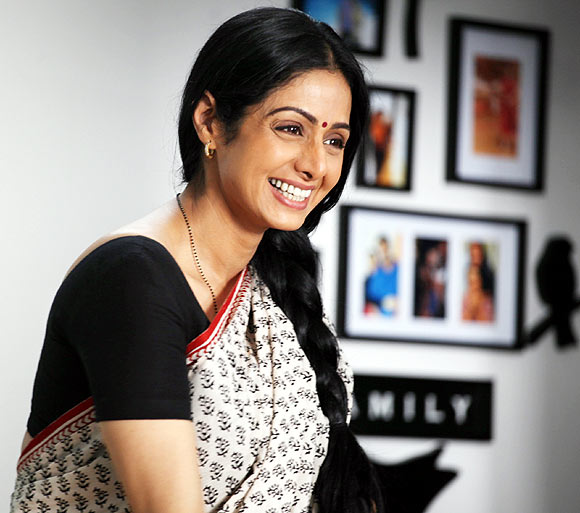 How do you look back at all the years that you have spent in the industry?

I am very happy that I got my identity because of this industry. I don't think everyone can become an actress. It`s not a joke. You really have to slog.

You have to devote your life to be the best. There is no point doing a film just to be a part of the industry.

A lot of films are being remade. Is there any film that you would like to be part of?

I am a big fan of Mother India. I can't remember the number of times I have seen the film and I can see that film at any time.

I am a big fan of Nargis Dutt and I would love to do that role.

There are rumours about the sequel to your film Mr India. Is the film happening?

People are eagerly waiting for the sequel of Mr India. Boney is first going to finish his film No Entry Mein Entry, and then we will do Mr India part 2.

Right now we are developing the subject and I think the sequel will go on the floors after No Entry Mein Entry. It will probably be next year.