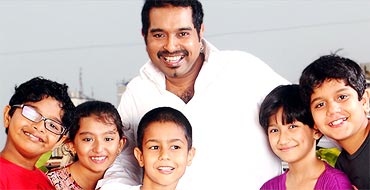 Indian singer Shankar Mahadevan wants you to learn music and he is making it easy, fun and accessible.

The multiple award-winning lead singer and musician of Bollywood's Shankar-Ehsan-Loy trio was recently in New York City to promote his new online music academy. Called the Shankar Mahadevan Academy, the Internet-based music school was launched in the United States on the musician's birthday, March 3.

It all started last year when Mahadevan, quite by chance, met Sridhar Ranganathan, his engineering school classmate from the Ramrao Adik Institute of Technology, Navi Mumbai, Maharashtra. The two had not met for 15 years.

"In the 15 years, I did my bit and he did his, including establishing Yahoo in India," Mahadevan says.

The first idea was to establish a physical school, but that would have taken a few years. Hence, the "journey of trying to make education fun on a technology platform," Ranganathan says. The academy was first launched in the US, "because we didn't want any broadband or network issues in India," he adds.

The academy will provide students of all ages, broken into groups of under and over 15 years, with structured lessons in Hindustani, Carnatic and devotional music.

Each programme has 12 courses -- four in the beginners, intermediate and advance levels. Before classes begin, students will visit an online music book called the OM Book, which features live videos, voice recording, notations, theory slides that talk about influences of Hindustani music and a glossary of the tradition. Applicants will first be tested with prerequisite exams, just as they were entering any other American school, and based on their level of training and knowledge, they will be placed at the beginners, intermediate or advanced levels.

The courses last 12 weeks. Each class consists of a live teacher based somewhere in India in direct and simultaneous contact with five students across the US, who can see and hear each other and the instructor through webcams. The half-hour class is held once a week and is available in an archived space for students to revisit. 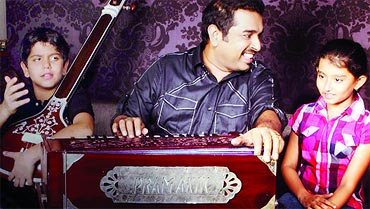 Image: Shankar Mahadevan with his students

Between classes, students can record their voices and leave it online in a box for teachers to review. The teachers will then get back to the students with their review.

Before the school went live, the programme was tested with pilot classes offered to 25 students in the US, divided among adults and children in Hindustani, Carnatic and devotional genres.

"There was nothing like this being offered anywhere," Mahadevan says. "With the pilot we wanted to check out the smooth functioning of technology vs teaching vs the musical parts. We didn't want people to say 'This Internet is boring, it is too slow, woh buffer hota rehta hai (It keeps buffering).' So we conducted class after class for three months. We didn't want to just test for a week and then launch. We didn't want people to say 'mera paisa wapis karo (refund my money),' which we will do if people ask for it."

The pilot tests were successful, but the students did not want to end the sessions. So they are enrolled in a paid pilot program, he adds.

Though the teaching of classical music in India is often not structured classes are based on how the guru may want to proceed on any given day. Mahadevan wants the online academy to function like a regular music school in the West.

"If you go to Berklee (College of Music in Boston) or the Julliard (School in New York) and even if you learn timpani, there is a syllabus," he says. "Every single day you know what you are supposed to learn and the teachers know what they are supposed to teach."

To get the stamp of authenticity, the curriculum has been approved by teachers ranging from the 80-year old Carnatic music singer Nedunuri Krishnamurthy and the likes of Hindustani classical vocalists Pandit Jasraj and Ustad Rashid Khan.

'Why can't Indian classical music be fun and enjoyable?' Image: Shankar Mahadevan with his students

What is important to Mahadevan is that the classes are fun, not intimidating. "When people think of Indian classical music, suddenly sab ka mooh serious ho jata hai (people's faces turn serious)," he remarked. "Why can't it be fun and enjoyable?  It can be cool. We are also approaching methods using popular medium."

For instance, children could use a well-known nursery rhyme like Twinkle Twinkle Little Star, he explains. "We introduce the concept of sargam using this nursery rhyme," he said, sing to illustrate his point.  "What they are learning in technical terms is called swar gyan -- the ability to decode a musical phrase into sargams, which is the ultimate thing in music. If you can decode, then you have the knowledge of music."

There is also a fun 'hobby' class for those who want to learn popular Hindi film songs. The idea behind introducing the lighter Bollywood song classes is that many people just want to sing.

"Apko seekhna hai (you want to learn) Kuch To Log Kahengey," he said, about the classic song from Amar Prem. "Aur mujhey seekhna hai (and I want to learn) Pal Pal Dil Key Paas (from Blackmail). We will have a small course for that too, with an Om book, a virtual teacher. We will teach songs by Lata (Mangeshkar), Kishore (Kumar), contemporary songs from Kal Ho Naa Ho, ghazals to spiritual pieces."

The program costs $300 per course, while the shorter Bollywood songs classes cost $59.

Mahadevan may one day want to move in the direction of building an actual academy, but right now he likes this idea the marriage between music and technology.

"We wanted to eliminate space," he said. "The idea came, the platform was there, we thought of it and we brainstormed a lot. They executed it really well and I gave my artistic input."