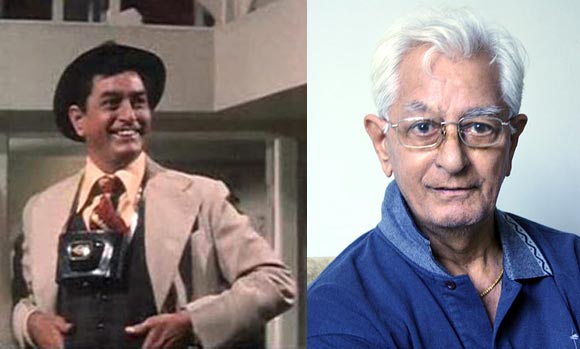 The name Ram Sethi may not ring a bell, but a quick look at his photograph (top, left) should be enough to prick your memory.

Known as Pyarelal, the actor has played Amitabh Bachchan's sidekick in several films like Zanjeer, Muqaddar Ka Sikandar and Yaarana.

At the ripe age of 73, he has returned to the limelight with an advertisement for the Hero Maestro scooter.

"People are recognising me once again. "I have got so many calls after the advertisement went on air," he says, obviously delighted with the response. "Rajkumar Hirani has approached me for his next film Peekay. I am also in talks with Farhan Akhtar's production house for a film."

Sethi walks down memory lane with Sonil Dedhia, and talks about his journey in the film industry.

I came to Mumbai from Delhi for the first time in 1962 to try my luck in films. We were eight brothers and one sister. My father told me he would give me Rs 150 for six months.

I didn't find much success and went back. I came back in 1964 and met (filmmaker) Ravi Tandon, who was not making any films at the time but assured me he would allow me to work with him. I went back to Delhi.

It wasn't till 1968 that I became a part of the film industry. And I haven't looked back since.

I went on to work with directors G R Sethi, Satyendra Goel and S Sukhdev who made documentaries. I didn't have a house in Mumbai. I stayed with Shabana Azmi's cousin Ishan Arya who was a renowned cameraman. 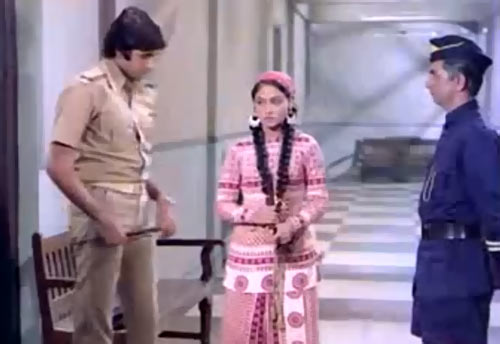 One of my friends took me to meet Prakash Mehra. I used to do a lot of Hindustani theatre. He had seen one of my plays and liked my work.

The first time I met him I told him, "I want to learn direction from you." He instantly obliged.

My journey with Prakash Mehra began on January 1, 1971. He was starting a new film, Ek Kunwari Ek Kunwara. Rakesh Roshan was making his debut in the film along with Pran and Leena Chandavarkar.

I started as a clapper boy and would write some dialogues too. Writers in those days would read and write their dialogues and scripts in Urdu. I also had to make the actors say their dialogues with the proper diction.

I distinctly remember Rakesh Roshan would pronounce the word behen (sister) as bhen. I had to teach him how to pronounce so many words (laughs).

Prakashji was an out-and-out commercial filmmaker. He never made any art films. He always believed that people should enjoy his films.

He was confident about his job. He would look at a film in totality and ignore the minor issues. He came to Mumbai to become a lyricist and went on to become one of the most successful directors in our industry

'I was a regular feature in all Prakash Mehra films' 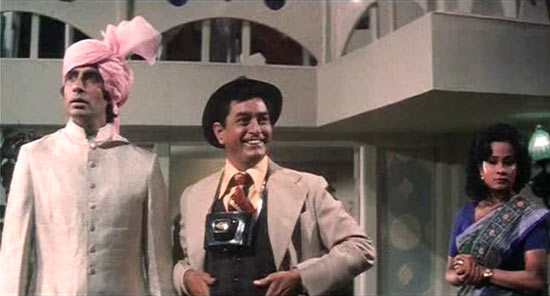 Debut as an actor

I was assisting Prakashji on Ek Kunwari Ek Kunwara when one day he asked me whether I would like to act. I immediately agreed.

Till today, no one knows that I played a double role in the film. After that I became a regular feature in all Prakash Mehra films.

I got a very prominent role in Zanjeer. He offered me the role of a constable who went around with Amitabh Bachchan who played a cop in the film. 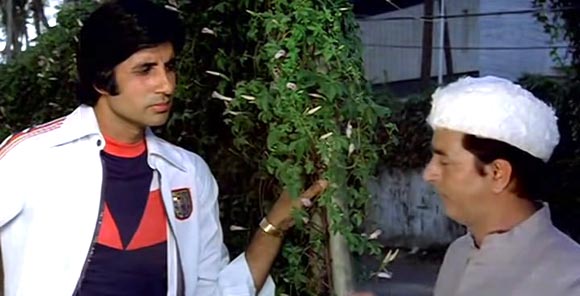 How the name Pyarelal evolved

Muqaddar Ka Sikandar changed my fortunes. Asrani was going to portray the role of Pyarelal. When we started shooting the film, Asrani was shooting for another film in a different location and got stuck there due to the rains.

We waited for two days and then Prakashji started panicking as we had dates with Amitabh Bachchan, Vinod Khanna and Rakhee and couldn't delay it any further.

He requested me to do the role. I was a little shocked as it was a big role and he offered it to me very casually.

The clothes and shoes were made to fit Asrani and were big for me. Somehow I managed to adjust and reached the set.

Prakashji saw how comfortable I was acting with Amitabh and he increased the length of my role. I had a full-fledged role in the film. People loved and appreciated my performance.

The film was very long and so hardly anyone's name was mentioned in the credits. My name was also not included. As my character in the film was called Pyarelal, people started calling me by that name. This is how I got the name Pyarelal.

Later, a lot of filmmakers who cast me in their films called my character Pyarelal. Even today, many people don't know that my real name is Ram Sethi. I don't mind.

I remember that soon after Muqaddar Ka Sikandar had released I had gone to Kolkata to shoot for Yaarana.

Amitabh was shooting at an indoor stadium for the song Saara Zaamana which became very popular. The stadium was filled with thousands of people. As I entered the stadium people recognised me and started shouting 'Oh Pyarelal!' in chorus.

I was stunned. It was an unbelievable moment in my life. Amitabh came up to me and said, "Just be calm. People here give you a lot of love but if you do one thing wrong, they can turn a little violent." 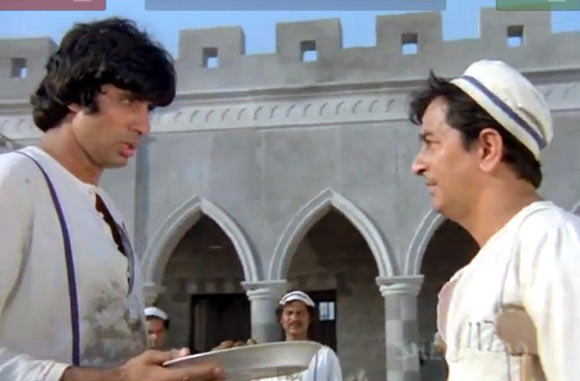 I got a lot of acting offers after Muqaddar Ka Sikandar. At the same time, I didn't want to leave Prakash Mehra. I would work in double and triple shifts. I would finish my shoot in the morning and then go and assist Prakashji.

I have assisted as a screenplay writer in almost all the films that he directed. I would never take any credit as I was already credited as an actor and assistant director.

I always enjoyed working with him. He gave me creative liberties that I never thought I could get elsewhere. Prakashji and I would sit in the evening to enjoy a couple of drinks.

There were times when he would think of a scene at two in the morning and would call me to discuss it. He knew he would forget it next day so he would ask me to note it down. We had a great rapport and an amazing bonding.

'I did realise I would be typecast as a comedian' 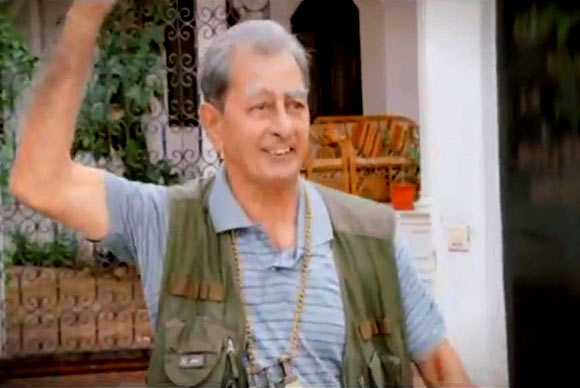 Being known as a comedian

I did realise that I would be typecast as a comedian. In fact, I had told Prakashji on several occasions that I would like to do a serious role. He always ignored me saying that if you are a comedian you should continue playing a comedian.

He would give me an example of Mehmood who was a top comedian. I accepted the circumstances and tried to excel in what I did.

I did some serious roles in a television series in 1996 but unfortunately people never saw that side of me.

'The Bombay riots took place and my films couldn't take off' 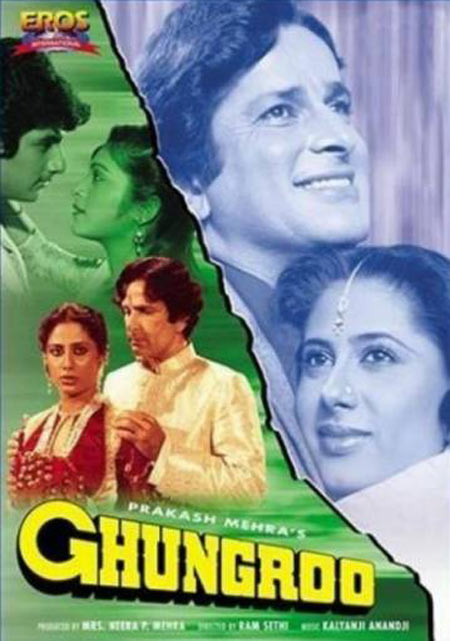 Making his debut as an independent director

I had approached Amitabh Bachchan for the film and he had readily agreed. He was going to Bangalore to shoot for Coolie and told me that once he comes back we would work out the dates.

I was very happy because I was just a comedian and the top actors of those times were ready to work in my film.

Unfortunately, my happiness was short-lived as Amitabh met with an accident on the sets of Coolie. I had to find a replacement for him which was a difficult task.

Prakashji supported me and told me that he would speak to any actor that I would like to cast in my film. I decided to settle for Suresh Oberoi as I wanted someone very macho. He did a good job and fortunately the film also did a decent job.

Why he couldn't direct more films

I wanted to direct further but Prakashji was so fond of me that he didn't want me to leave him and move ahead with my direction. He would affectionately tell me, "Sethi, work with me on this film and then we will start on your film."

That never happened. Ultimately, my enthusiasm died down and I never got back to direction. I was about to direct three films during 1993 but luck was against me. The Bombay riots took place and my films couldn't take off.

'There were times when I didn't have money to eat food' 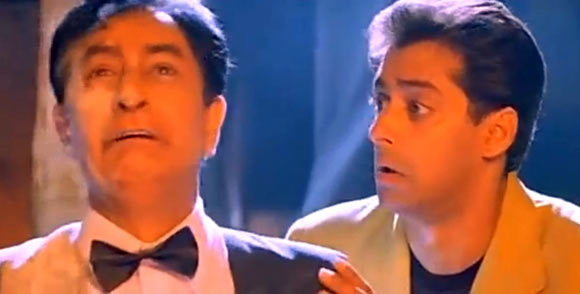 Shutters down for acting

There were times when I didn't have money to eat food. I was literally on the footpath. Prakashji would monetarily support me.

Somehow I sailed through that period. A year later, in late 1994, some television directors approached me with acting work. I was elated as I was getting paid Rs 2,000 per day. I worked in television for almost four years.

We made some television serials, which we wanted to air on Doordarshan. The financer was an American and refused to pay a bribe to Doordarshan and the serials couldn't be aired.

In 2000, I had a crisis in the family and had to move to Delhi. When I came back after two years, the whole industry had changed. So many new channels had emerged. I couldn't be comfortable. I went into depression and would feel disoriented and nervous.

I would meet my friends but would forget their names. I met Prakashji who gave me some monetary help. I also had some land which I sold and that helped me during those days.

I have two sons, both married. The elder one stays with me and works in an IT firm and the younger son is settled in Australia.

'I have started my second innings' 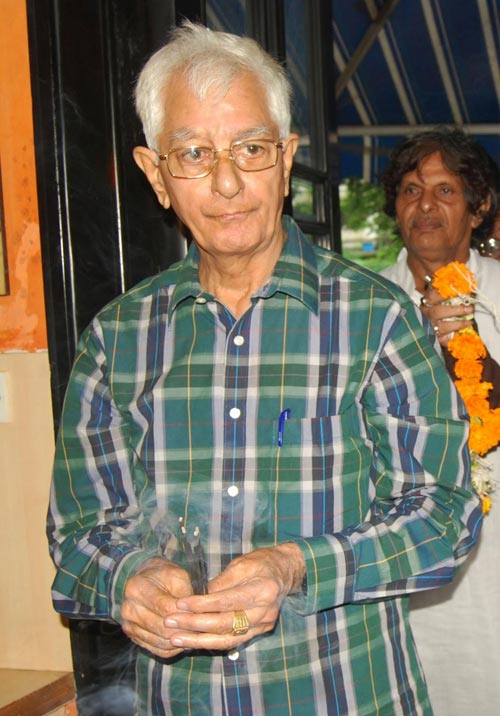 Getting back to work

In 2003, Prakashji and I tried to approach Amitabh Bachchan for a film. We even finalised a script. Unfortunately, things didn't work out as he had heart surgery and I was busy acting in television serials.

Prakashji's children didn't support him and found his ideas obsolete. They always treated him as a retired person. His health deteriorated after his wife slipped into a coma and eventually passed away.

His sons sold off his office and Sumeet Theatre which he owned. They opened a restaurant. I remember I was in Delhi for some family work for a year and half and when I came back and met him he hugged me and started crying as he felt alone.

In the end, he succumbed to lung infection because of which he also got pneumonia and multiple organ failure. After he passed away in 2009 I also lost interest in acting.

Khelein Hum Jee Jaan Sey happened suddenly. I wasn't doing anything and one day a person I know called me and told me to meet Ashutosh Gowariker. I played the small but impactful role of Rehman Chacha. I really liked my role because for a change, I got to portray a serious character in the film.

Now, after the Hero Maestro advertisement, the industry people have started noticing me and I have got some good offers. It feels like I have started my second innings (laughs).