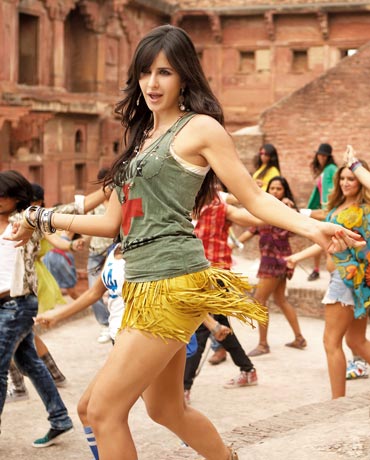 Katrina Kaif makes a pretty pair with Imran Khan in their next film, Mere Brother Ki Dulhan. Directed by first-timer Ali Abbas Zafar, the film will release this Friday.

In a candid conversation, Katrina spoke freely about the success of her previous film Zindagi Na Milegio Dobara, working with Imran, her upcoming films with Salman Khan and Shah Rukh Khan and why there are no camps in the industry. Sonil Dedhia took notes.

You seem to be enjoying yourself a lot -- riding a bike and doing under water diving in Zindagi Na Milegi Dobara, driving an auto rickshaw and getting that rock star look in Mere Brother Ki Dulhan.

I try to get some freshness in each of the characters that I play. Small things make the difference. You are doing two films a year and if you show something that is a little different from the previous film, then the audience doesn't get bored. I have worked hard to reach where I am today.

It is always an honour to be part of a successful film. I really enjoyed working on the film. I thoroughly enjoyed riding a bike in the film. Many people have asked me whether I actually rode the bike. I was, like, there are so many girls who know how to ride a bike! I'm glad the film is doing really well.

What is it that you look for in a script? Is it a conscious decision to work with only big banners?

I go purely by my instincts. I take a call whether I should do a role that comes my way just by going by what my instinct says. I have been extremely lucky that I have had quite a number of good as well as successful films to my credit. If you ask me whether it has been a conscious strategy on my part, I'd say it is not, because there is no way that you can plan something like this consciously.

'For an actor, it's really easy to be a rock star' 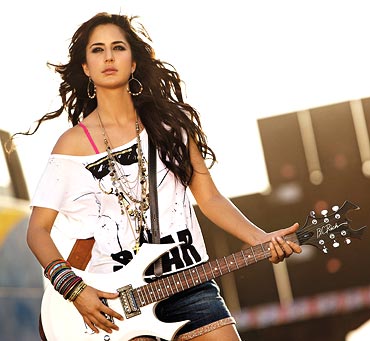 Your rock star avatar in MBKD has become the talk of the town.

I was quite apprehensive about my rock star avatar. I had an issue with the heavy Punjabi lyrics which I couldn't understand. But ultimately, everyone convinced me to go for it.

For an actor, it's really easy to be a rock star. You just need to wear some boots, a pair of torn jeans, apply some kaajal, messy hair and hold a guitar and strum the strings. To bring reality to her character, I learnt to play the guitar and my knowledge about the instrument helped me portray the character of a rock singer more convincingly in the film.

Farhan Akhtar did gift you a guitar on your birthday.

Yes, I am learning to play. Right now I can just play one song: Knocking on Heaven's Door.

So do you think the Dhunki song in MBKD will replace the 'Sheila' tag you earned?

If Dhunki becomes even half of what Sheila had become, I would be really happy.

I haven't watched that film so I cannot comment on it. I have heard the story of Sorry Bhai and I can assure you, MBKD is completely different.

'Initially, there was a little friction between Imran and me' 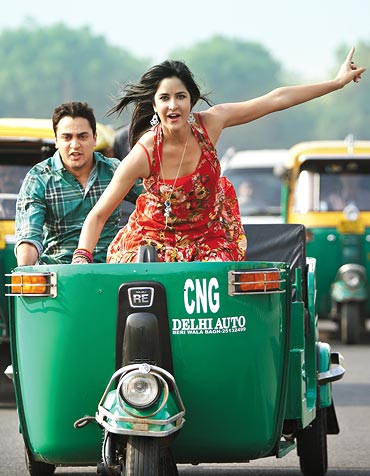 What was it that made you say yes to MBKD?

When Ali narrated the script, he told me that in essence it is like the Dharmendra-Amitabh film Chupke Chupke with a present-day spirit. It has its genuine moments with love and emotions, but this is largely a fun film. It's a romantic comedy, very exaggerated, tongue-n-cheek kind. A little larger than life and a loud film just like Aajab Prem Ki Ghazab Kahani.

It is your first film with Imran Khan.

Before we started shooting, there was a little friction between us to understand each other as this kind of comedy was new for Imran. We didn't know each other much and there had to be a fine-tuning, which eventually helped us to get into the characters that we are playing. It was a nice film for both of us to do together. Imran is a very genuine guy. He has a great sense of humour.

The whole team of MBKD is very young. How was your experience of shooting for the film?

Imran and I broke the ice with the first scene itself and became friends. My first scene with Ali was the Sholay scene, where I call Imran 'Basanti' and I was wearing this short dress and standing on the bonnet of a jeep, with Ali sitting in the driver's seat and Imran in the back seat. The shot was okayed in one take. Once the shot concluded, Imran said, "You're quite mad, aren't you?"

As for Ali, he's a musician, so he always played the guitar for us since we were shooting in a place where there was no television and it wasn't easy to pass the time. Ali and I also played a lot of cricket during our free time. Imran would come for some time and then get bored but it was fun to play cricket with Ali. 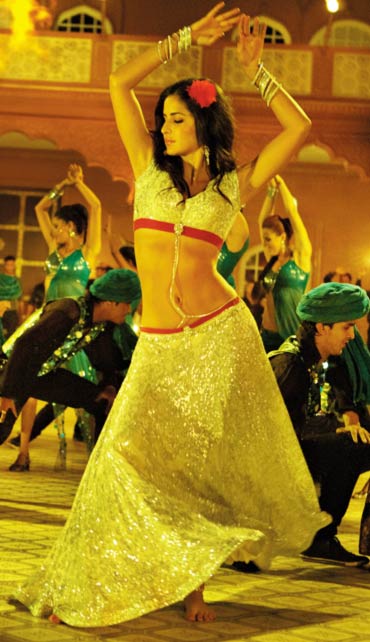 Three films with Yash Raj; are you on a dream run?

The last time I acted in a Yash Raj film was New York, which was in 2009. It is a pure co-incidence and not a conscious decision to take up every project coming my way, with Yash Raj producing these films. A few years ago, I did two films (Namastey London and Singh Is Kingg) with Vipul Shah in a single year. It's all about an actor liking a script and deciding to be part of it.

Ali Abbas Zafar, the director of MBKD, was the first assistant director on the film and he came to me with the script and it was to be produced by Yash Raj. I liked the script and I decided to take it up.

You're doing a film, directed by Yash Chopra and with Shah Rukh Khan in the lead.

It was one of my dreams to work in a Yash Raj film. I'm terrified at the thought of working with SRK. I have watched him at an event and am dumbfounded by his energy. The shooting of our film is yet to begin and I wonder how I will manage to act with him.

There's been quite a buzz about you doing a film with Salman Khan and Shah Rukh Khan simultaneously.

They are both my co-stars. They are two much-respected actors in the industry today and the equation between them doesn't have my involvement. So far I have worked with everyone from the Deols to Khans to the Kapoors. There is a misconception in the media that there are camps. We all have different equations. Friendly, not so friendly, but everyone respects everyone's individuality. There are really no camps that exist in our industry.

'I would love to work with Aamir Khan' 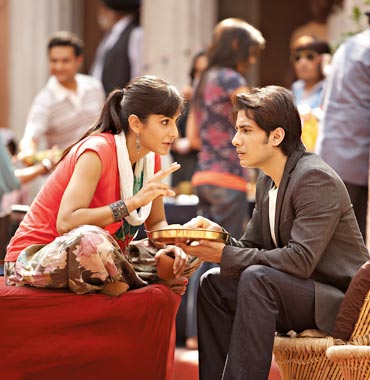 Is there a chance of you working with Aamir Khan?

Who doesn't want to work with the three Khans? (Smiles). They are the pillars of the industry. If anything does come up with Aamir, why not?

You were planning to start your own production house and it was said that you even bought the rights of a French film.

Someone else has bought the rights. If I want to do that film, I will have to do it with them.

I believe that it is necessary for you to help those people who have either worked for you or are still working for you. I did a special appearance in Bodyguard as a special favour to Salman's sister Alvira, who is a dear friend and like family to me.

My hairdresser Promila Hunter is producing Main Krishna Hoon with Rajeev Ruia as the director and I could not say no to her when she asked me whether I would agree to do a special appearance in her film.
More
Write a
Comment
Print this
article