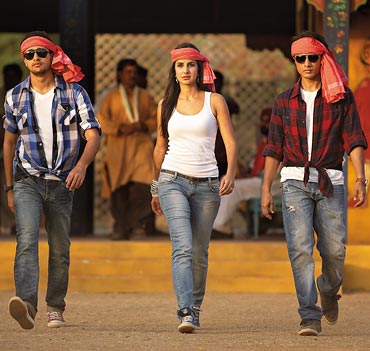 After Delhi Belly, Imran Khan is all set to deliver another hit with Mere Brother Ki Dulhan, co-starring Katrina Kaif.

The actor claims that even though both films are comedies, the latter was much more demanding -- and that had nothing to do with the fact that the director Ali Abbas Zafar was a first-timer.

Khan tells Sonil Dedhia how his mother played an important part in getting him the film, and what it was like to imitate the top Khans -- Aamir, Salman and Shah Rukh -- in the title song.

Will the success of Delhi Belly have a spill-over effect on your upcoming film Mere Brother Ki Dulhan?

So do you think the pressure is more when you are coming out of a hit film?

The pressure to deliver a hit is exactly the same with every film. 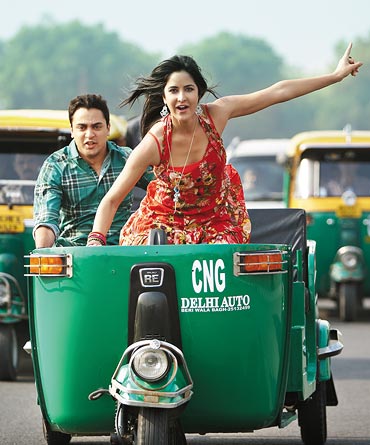 This is your first film with Yash Raj Films. How has the experience been?

Yash Raj is unique in that their films have a certain style, on a different scale. Mere Brother Ki Dulhan is probably the first film where I have done so much lip-synching in songs and the dance steps are choreographed.

Even the comedy is louder than the other films that I have done. I am a shy person and never thought that I would be able to carry this off. It is a typical Bollywood film. Ali Abbas Zafar has brought out a side in me which people haven't seen before.

How was your interaction with Aditya Chopra?

There are a lot of stories that Aditya Chopra does not exist. When I met him for the first time, I realised that he is for real (laughs). I was amazed by the excitement and passion that he has for making movies. He loves to watch movies and his only goal in life is to make movies. He is so dedicated that he will listen to everybody's comments and try to include them to make the film better.

Your mother Nuzhat played an important role in getting you this film.

Yes, that's true. Aditya Chopra had called me last year and said that he wanted me to meet Ali Abbas Zafar who has assisted Yash Raj in a lot of films. When I met Ali, he told me that he was making a film called Mere Brother Ki Dulhan. I thought it was a horrible title. I heard the narration of the story and it sounded like a bad story. He gave me the script and I just said that I will call him.

The script was lying in one corner when my mother found it and read it. She told me that I should read the script and do the film because it was hilarious. So I read it, and loved it. His script just won me over. 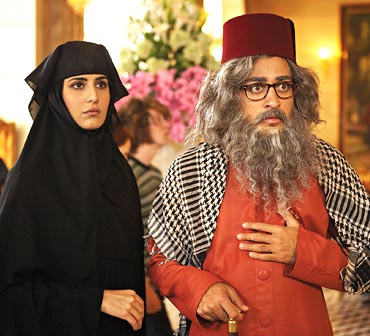 The character is not very heroic. He is a simple Dehradun boy-next-door, very relatable. He wears simple jeans, check shirt, nothing fancy about him. He is a normal guy. When you see the film you will realise that the characters do not want to hurt anyone. We have treated the film with humour and with love.

The film is about how we get into a situation where a guy starts to like his brother's dulhan and we have shown it in a way that everyone will be happy in the end.

The film is a comedy, so how different is it from Delhi Belly?

MBKD was more demanding than Delhi Belly. As I mentioned, the film required me to dance, sing, and act in a completely different manner. For me, Delhi Belly was a film in a space which I understood inherently as it's the kind of movie which I have grown up watching. With this film, I had to rely on my director to guide me.

Have you helped any friend find a dulhan?

You have worked with a lot of first time directors. Don't you feel sceptical that the film might not work?

If I don't feel comfortable with something, then I don't associate myself with it. I have rejected a lot of new directors because I did not have faith in them. I like working with people who I understand as we are on the same wavelength. There was a time when I was a newcomer in the industry and people supported me. I think I am in a position today where I can support a newcomer and his talent. 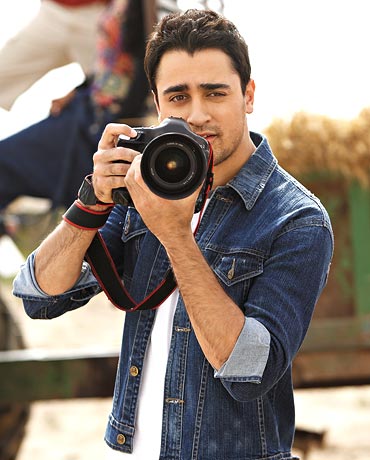 How was it working with your co-star Ali Zafar?

When I read the script, I told Aditya Chopra and Ali Abbas Zafar that we needed someone really good in my brother's role as the character in the movie is very strong. Ali Abbas told me he was looking for Ali Zafar who was in Pakistan at that time. Our director narrated the whole story on Skype and Ali Zafar agreed to do the film. He is very funny in the film.

There were rumours that we didn't get along well on the sets which are completely baseless. Ali, Katrina and I had a very good time shooting for the film.

You are paying a tribute to the three Khans (Aamir, Salman and Shah Rukh) by copying their dance steps in one of the songs. Whose idea was it?

It was a joint idea between the director, Bosco (choreographer) and me. The idea was to pay tribute to the three Khans who have inspired us and entertained us for so many years. Any actor working in the industry today would have to acknowledge that one of the three or all three inspired them at some point of time. They inspire me a lot and it was our way of saluting them and saying thank you.

Which one did you enjoy the most?

'I am inspired by Aamir's honesty, Salman's charisma and Shah Rukh's energy' 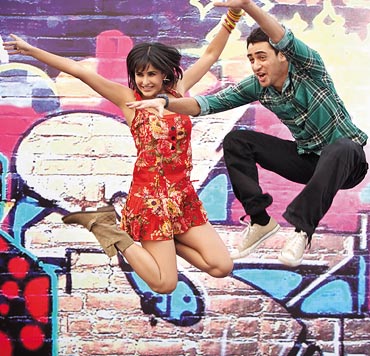 What do you appreciate or admire most about each of the three?

I appreciate Aamir's honesty. The most important thing in his life is whatever you do, you must do it correctly. What I have always admired about Aamir and what a lot of people are jealous about is his ability to figure out the pulse of the audience. He knows what is missing and delivers it bang on. It's a mystery how he does it.

Salman Khan's charisma is beyond anything. I don't think any other star has possessed it at any point of time in their career. With other stars, people see the posters, watch the trailers and the song and will question certain things.This doesn't happen with Salman. You just put Salman's face and the name of the film on the poster and people will happily walk into the theatres to watch the film. They don't care what the film is going to be about. He is just on another planet.

What has always inspired me about Shah Rukh Khan is the level of energy he possesses. Whether it's a film or a stage show he is crackling with energy. He has a 400 volt current running through him. You don't want to take your eyes off him when he is performing.

'Katrina's level of dedication is unbelievable' 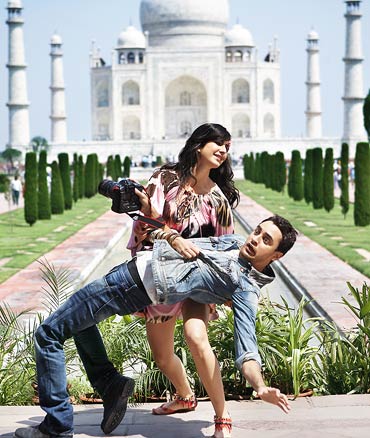 Is there any co-star who has inspired you?

I am very inspired by Katrina. The level of dedication that she has for her work is unbelievable. Katrina came here to work in Hindi films not knowing a word of Hindi and today, she speaks clean and fluent Hindi. The way she works on her character, dialogue, dance steps and fitness is amazing. The kind of effort she puts in is more than any other co-star I have worked with.

You filed a public interest litigation in June against the Maharashtra government's decision to up the drinking age limit to 25. Have there been any developments?

I don't want to talk about it right now. I will address a press conference in a week's time.  There has been a very interesting development. The law that the government is trying to pass is not what it seems. What they have said is technically not a law.

In 2001, too, they raised the legal drinking age to 25, but it was not enforced, and everyone forgot about it. Again this year in June they said they have raised the drinking age from 21 to 25. But there's a grey area on whether it's in effect or not. And if it isn't, then the PIL is not needed. I have filed a Right To Information and I will be getting the response in a day or two.