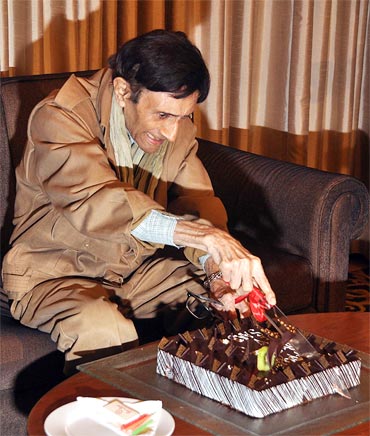 Dev Anand, who turns 88 today, marked the event by cutting his birthday cake for the very first time. The mentally and physically active actor-director continues to make movies – his latest, Chargesheet, is due to release on Friday.

The evergreen Anand, who commands an enviable fan following, talks to Patcy N with great pride about his life and his long innings in filmdom.

How are you celebrating your birthday?

Today evening I have a party and many dignitaries will come to wish me.

I have lots of fans waiting at my office to wish me; they will shake my hand and not want to leave my hand. I don't have the guts to stay away from my fans because they have come to me with so much love and so it becomes my duty to spend time with them. 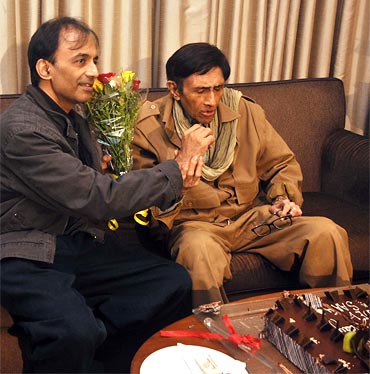 Did you get many phone calls on your birthday?

My phone betrayed me last night when it stopped working, so all my birthday wishes were coming on Suneil's phones in the middle of the night. His phone kept on ringing through the night, he did not get any sleep and he was upset.

I get many phone calls whether it is my birthday or not. I get anonymous calls even now; they are happy just to listen to my voice and then put the phone down. I am happy that somebody, somewhere in the world is either thinking of me or seeing me in some film.

I have been in this industry for 66 years, as a star, as an actor. When I think of the years I have put in this industry I feel giddy -- 62 years of Navketan and we are still making movies. Chargesheet is going to release this Friday. I have directed Chargesheet and I have played a central character in the film too. Actors like Naseeruddin Shah, Jackie Shroff and Divya Dutta are in the film. There are some new actors too.

In this country, when a girl or boy gets older they have one dream and that is to become a star. It is difficult to get a break in this industry, but there is one man --Dev Anand-- who can give you that because I am not scared, I am a gambler and I am a fancier of talent.

I bring new stories to the table. I don't make remakes of film from anywhere, not even Hollywood films. I think I am unique. Till the time my body permits and my mind is sharp, I will keep on making films. I am not only competing with people in India but I am competing with the world as a writer, producer, director and star.

I get lots of spiritual happiness, I don't know whether I believe in God or not, but there is some power somewhere that is making all this happen. 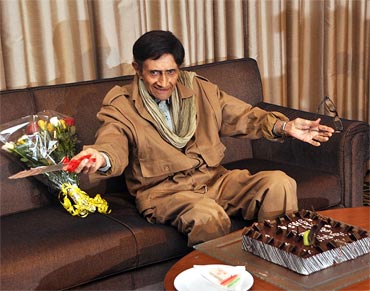 What is the best gift that you have got today?

That you all have come to celebrate my birthday is my biggest gift because whatever I say here today, you will show it to the world. You are my communicator to the world and that's why I love you all very much.

I never make a film so that I can sit in a room and watch it alo#8800 I make it so that the world sees it. I am in a profession which is the best profession and someone has rightly said 'there is no business like show business' and I repeat it.

And what is the best gift that you have got in your life?

My parents gave birth to me and that was a huge gift. A better gift was when they put me into a good college where I did BA honours in English Literature. There was no Hindustan and Pakistan then. I couldn't do my MA because my father's financial condition started becoming bad.

I don't know at what moment I decided to come to Mumbai; may be I saw the mirror, or maybe there was a voice from within saying 'Dev, Bombay is a film city, you should go to Mumbai'.

I came to Mumbai with whatever money I had in my pocket. I sat in the third class compartment of the Frontier Mail and came to Mumbai Central for the first time in my life. I knew no one. There were two years of struggle. I saw hunger and nakedness but always there was a smile on my face and a positive attitude. People would meet me, they would like to talk to me, but nobody offered me work.

But when I got a job, all my talent, personality, style, intellect, all came out and even today it is coming out.

'I enjoy filmmaking, if I don't do it I will not survive 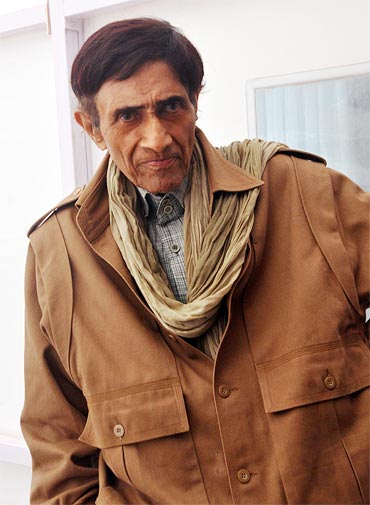 How do you get so much energy to do so much work?

When I see so many beautiful faces (points to the assembled media) I get so much energy. I enjoy all this (filmmaking), if I don't do it I will not survive. This is my strength and this is my world, these are my people and this is my Hindustan.

I have million dollar thoughts -- only I can think the way I think. There is no one of my age in this profession with such a huge span of work and I am proud of it. I am not boasting about it, it is the truth.

I don't lose patience. It takes one-and-a- half years to make a motion picture and I am the most patient man in the world. You can't do the best work in the world unless you are a patient person.

I have spiritual power but I should have body strength, I will keep on going.

I get new ideas and I want to spread those ideas to the world. I have a company, I have infrastructure, and that's why I am making films. I call people for my films and people come and work with me.

I love Lataji. I know Lataji since she was so small and would sit silently in the corner on the floor listening to the music director's tune and sing the song. Lataji is supreme and I love her. I don't want to say the same thing over and over about her. But Lataji knows even if I don't say anything about her in public, I have praised her thousands of times in my heart.

'Sorrow cannot hold me all the time; I have to get out of it'

How do you get your story ideas?

I have seen so many things in my life and I have read about so many things. When I make a film, I first plan what kind of film I want to make. Once I decide that, I start thinking and searching for stories from my own memories. Like waves in the ocean I get my ideas from my memories and I mould them into my script. So even if my story is fiction, you will feel it is real.

Who is your favourite director today?

I won't name one because it will be unfair to the rest, if someone is a star it means he or she is a good actor. They probably inspire me also like I must have inspired them sometime or the other.

Recently, Shammi Kapoor and Surinder Kapoor have passed away and Jagjit Singh is critically ill. Do you think it is a bad phase for the film industry?

It is part of life; everybody has to go, to pass away some day. That doesn't mean when you are working you think of people passing away -- that is negative. Think of life because you are writing about life.

My father and brothers passed away. Vijay Anand, Chetan Anand both passed away. It is very sad. I feel sorrow but sorrow cannot hold me all the time; I have to get out of it.