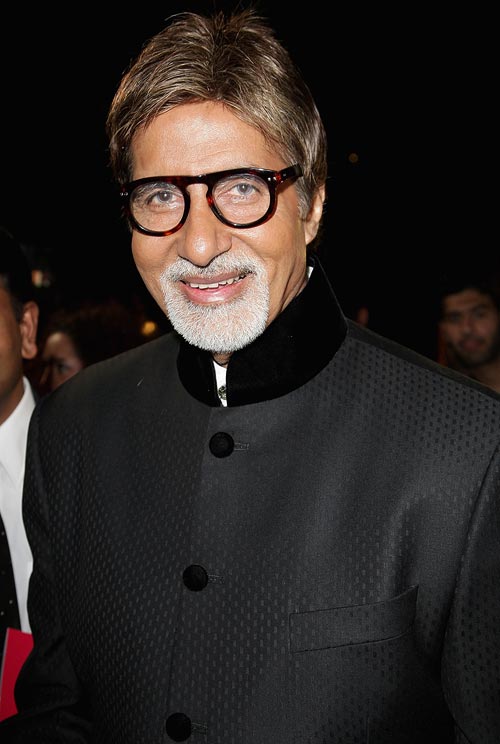 Amitabh Bachchan is one of the busiest actors in the film industry even today.

In fact, the actor even works on holidays!

On October 2, the superstar took time out to give interviews to the media, as celebrations for his 70th birthday on October 11 started picking up.

Amitabh looks back at his life and career, with Sonil Dedhia.

I don't make resolutions because I am not in a state to make any. I am 70 now and obviously, cannot play a 30-year-old now. So whatever roles is offered to me, I do.

It's been more than four decades in the industry. What is the motivational drive to get up every day and go to work?

I get up in the morning every day because I have got a job and I have a commitment to honour. I have to be there at a particular time so I get up. I have to take time out from my normal routine which includes getting ready, going to gym, and then to work.

'I have never paid attention to my popularity' 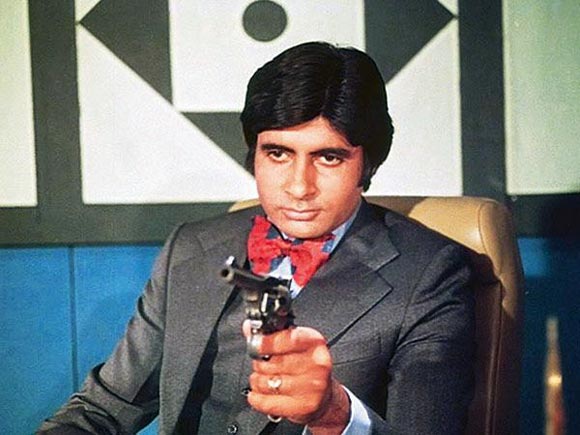 Amongst your contemporaries, you are probably the only one who is still working at this age continuously. The other actors have withdrawn from the limelight. And your popularity is soaring every day. Do you introspect yourself as to why everyone still likes you?

I never judge myself. I cannot say my contemporaries have been left behind me. That would be wrong.

Actors like Shatughan Sinha, Vinod Khanna, Dharmendra and Rishi Kapoor are very much active and working in films. Unfortunately, Shashi Kapoor is unwell or else I am sure he too would be active.  In fact, Vinod Khanna and Shatrughan Sinha have entered politics and are doing well.

I feel I have been left behind by my contemporaries.

But if you look at the admiration from fans, you have more than any of them.

I have never paid attention to my popularity. People can write what they want to but it doesn't matter to me. 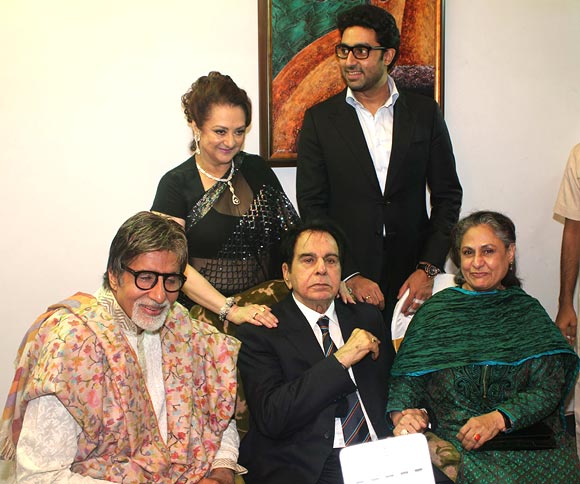 There are a lot of young actors who look up to you and want to be like you. Who do you look up to?

Dilip sahib (Dilip Kumar) and Waheedaji (Waheeda Rehman). They are my favourite artists of all time and my idols even today.

When it comes to the history of Indian cinema, I believe it can be easily divided into an era before Dilip Kumar, and after he joined films.There cannot be anyone like him

You had the opportunity of working with him in Shakti.

When you get to work with someone who has been your favourite actor or the one you idolise, there are a lot of emotions that run through your mind. He is someone whom I have looked up to him since my childhood.

When we came together to shoot for Shakti, I felt bizarre. It was difficult for me to digest the fact that I was sharing screen space with him.

I am fortunate enough to have got the opportunity to work with a legendary actor like him. Even today, we are in constant touch. Once in a while, we call or send a SMS.

'I feel fortunate to have worked with some great filmmakers' 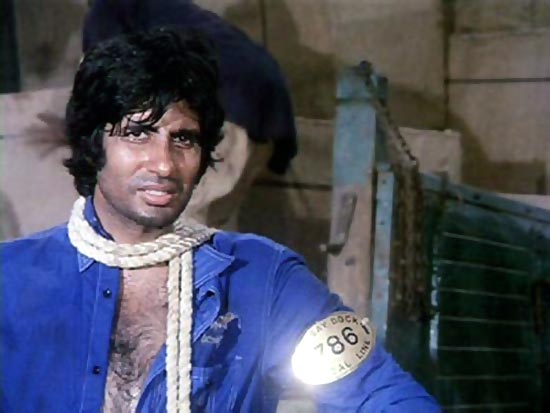 What kind of cinema has been more satisfactory to you?

I have been part of the industry since four decades so I feel fortunate to have worked with some great filmmakers, who were competent and legendary people.

At the same time, I had the opportunity to have worked with Salim-Javed (Salim Khan and Javed Akhtar). They wrote brilliant stories and made some memorable characters.

On the other hand, Manmohan Desai had a madness in him. He knew the pulse of the audience very well.

After that, I worked with filmmakers like Yash Chopra who gave some of the biggest hits of my career.

At the same time, I worked with Mukul Anand and Tinnu Anand. The new millennium saw the rise of filmmakers like Aditya Chopra and Karan Johar and I was fortunate to work with them. At this time in my career, I am working once again with some bright filmmakers like R Balki, Shoojit Sircar and Prakash Jha, who have brilliant ideas.

How do you look back at your career, especially the highs and lows

Every human being will go through a phase when there are highs and lows. Everything that goes up comes down. I don't think I am particularly different from anyone. We all have our highs and lows. It is just about what kind of attitude you have during the time.

If you have success, you should know that it is going to be short lived and if you have lows and the courage to fight or an attempt to make a comeback, then all the best! 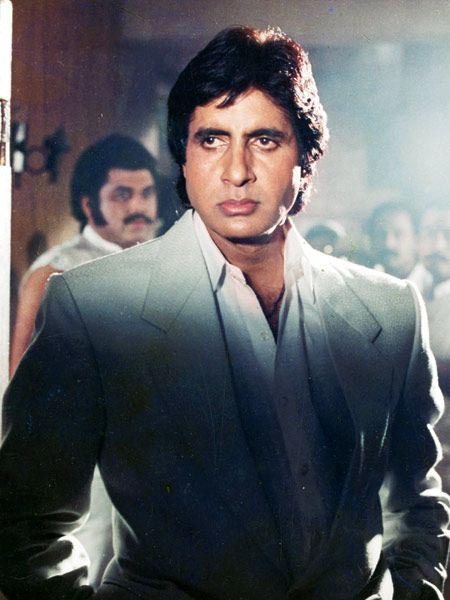 What do you have to say about the kind of films that are made today?

There have been some brilliant films like Paan Singh Tomar, Gangs Of Wasseypur, Vicky Donor and Kahaani. These films are so different and liked by almost everyone. They did good business too. This shows the audience has matured and wants a good story with good presentation.

But if these films released 30-40 years back, they wouldn't have got the kind of response and reception they got today.

There are several young filmmakers who crave to work with you.

Kahan hai aise? Jaldi bhejiye unhe mere paas (Where are these filmmakers? Please send them to me quickly). You must be in touch with them on a regular basis, so please recommend my name to them (Laughs).

'I have a problem of saying no' 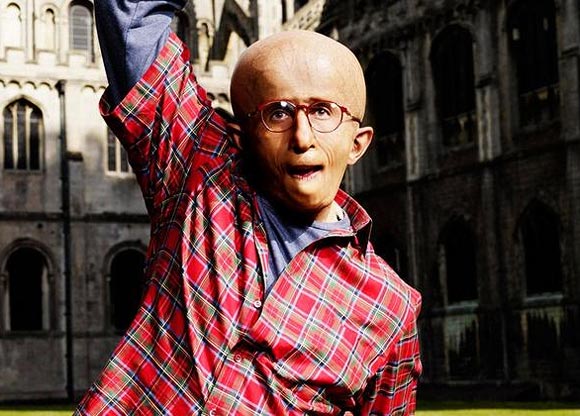 When was the last time you auditioned for a movie?

(Thinks hard) I can't remember. Nobody has called me for an audition so far. I can't remember auditioning for a role. The filmmakers who come to me with films either take me or reject me.

Normally, the script comes to me for reading and most filmmakers come with pre-determined ideas of what characters would they want me to portray. If I feel I can do justice to the role, I go ahead and do it.

Is it difficult for you to say no?

Yes. I have a problem of saying no but I am trying to get over it. I can't be working in all the projects that come my way. But by large, if the story is appealing and if I like what I am going to be doing, the production and the people I would be working with, then I accept the offer.

'Some films have made over Rs 300 crore' 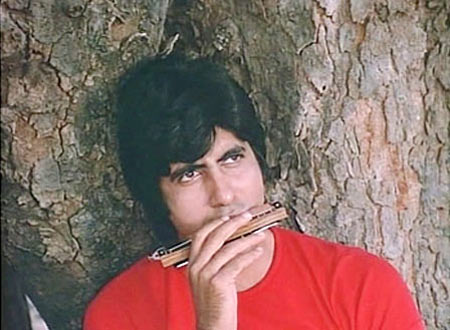 When your films released, it was the number of weeks that mattered. Today, it is box office collections.

I think the greater opportunity lies in accessing entertainment, whether it is television or internet or in any other medium. There are many countries in the world like France that decide the success of the film based on the number of footfalls (in the theatre) rather than on the money collected.

This is kind of debate can prevail – should the number of people who watch a film matter or the money gained that will decide the success or failure of a film. Both are equally important.

This is something our trade will have to decide. So far, our trade looks at the collections at the box office, the money invested and how much is gained. If you look at the figures, the length of the films is important because the attention span of the new generation is small. I believe this is because of computerization, the internet, having easy access to or having an easy answer to questions almost at a given second.

I write a blog and constantly tweet. I get many letters and responses from people who make calculations on some of my old films and have discovered that films like Don -- with respect to the time it ran, and then compared to today's time and value -- have made over Rs 200 crores. Some films have made over Rs 300 crore but that was not mentioned at that time.

'I haven't charged any money for The Great Gatsby' 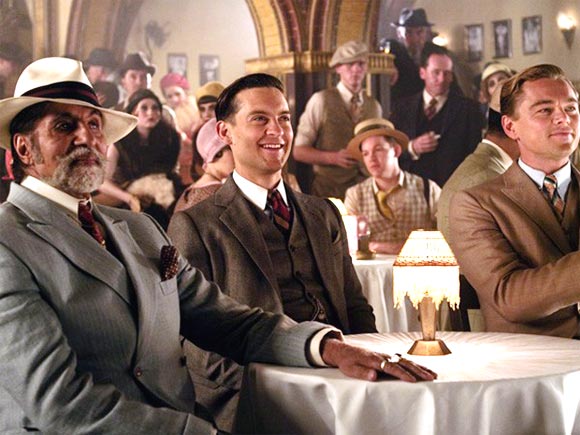 You have taken a new step in your career by venturing into Hollywood with a film like The Great Gatsby.

It's not really a project to talk about. Even before you blink your eyes, I will be out of the frame. It's just a passing scene.

But you had mentioned in an interview that you would not like to work in Hollywood.

I can't remember saying that. What I had said was that if I had an option between doing a film in Hollywood and in India, I would prefer India because our culture, colour and temperament is not going to match the Hollywood audience and vice versa. We don't have many foreign actors working in our country as I feel they don't fit into our social strata.

I am very happy working here and being with my industry. But yes, if there is an offer that is good enough, I will do the Hollywood film.

What attracted you to The Great Gatsby?

I did the film as a good gesture. Director Baz Luhrman was on a tour of India in his private capacity on a motorcycle with his friend. He just called my office and requested a meeting with me and I obliged. His friend was a painter, who gave me some paintings. We spoke about life, India and Australia and they went away.

A year after that meeting, he called me and said that he was making a film and there was a small role and was wondering if I could do the film. I did the film as a gesture and haven't even charged any money for it.

'I have never sat down and taught anything to Abhishek' 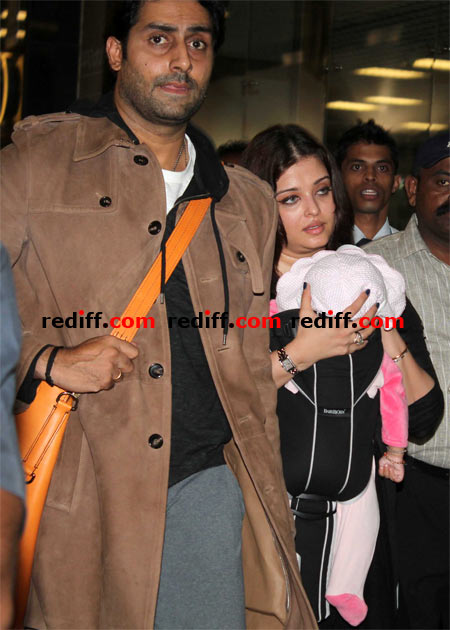 You have voiced concern over your son Abhishek's career.

When a child is going through some trouble, any parent would feel concerned. It's natural. You don't give up hope. I have never sat down and taught him. I don't consider myself worthy of teaching anybody.

I still feel that if there are any moments that I feel need to corrected, I go up and talk to him. He has never been to a film school, or had any formal training in acting so I think he gets to learn with every film that he does.

There is a constant media glare every time your granddaughter Aaradhya steps out. Does that bother you?

In today's world, where can there be privacy? The moment we step out, there are thousands of cameras following us. Today, a camera is present in all cell phones and everyone owns one. Who can fight with that?

'I don't aspire for anything' 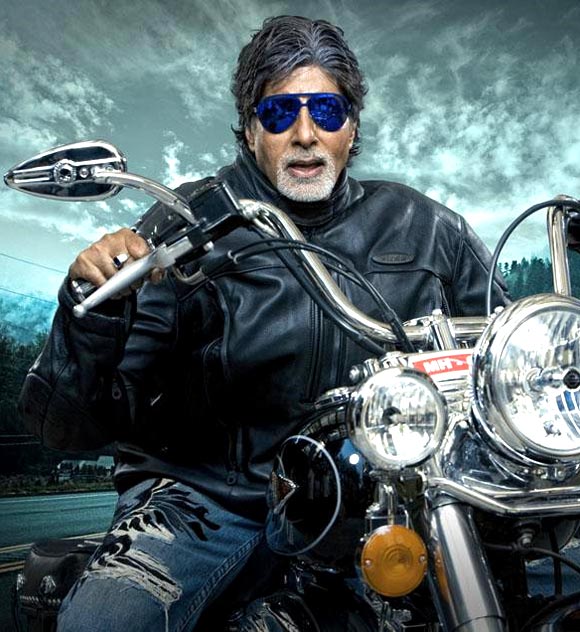 You are constantly busy with films and other commitments. How do you take time out to update your blog and also be active on other social platforms?

If one wants to take time out to do something, he can always do it. I have made a communication with my fans through my blog and various other social platforms. I have a commitment towards my fans and need to fulfil it.

There are times when I am awake till the wee hours of the morning to write my blog because my fans know that I update it every day and so they eagerly wait for me to write.

After spending more than four decades in the industry are they any aspirations that you would like to fulfil?

I don't aspire for anything.  If something falls in my lap I would be happy to accept it. I would continue working according to wishes and expectations of the audience. So long as I am healthy and mobile I would try doing some work.