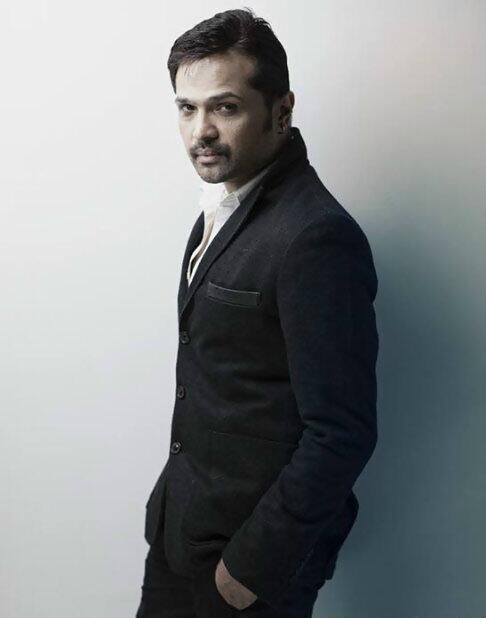 'I failed because I was not dedicated as an actor. I sing, compose music, act and produce films all at the same time.'

Himesh Reshammiya gets candid about his failure as an actor.

Himesh Reshammiya is giving his all to his upcoming film The Xpose, including losing 20 kilos to reinvent himself as an actor.

“I am not worried about the negative opinion that is coming in. I feel there is a buzz about the film. The real challenge for me is to be appreciated for my acting,” he says.

Himesh talks to Sonil Dedhia about his failed films, his fitness regime and why he thinks Salman Khan is a superstar.

Why did you lose so much weight?

My first film as an actor, Aap Kaa Surroor, was a super hit, but the films that came after that were just cashing in on my brand value as a successful music composer.

I am very dedicated to music and very critical about every song that I deliver, but I think the same kind of passion and dedication was not there from my side to become a successful actor.

To do the role of Ravi Kumar in The Xpose, I had to be fit. I lost 20 kilos in six months.

I don't eat between 9 pm and 10 am. I do a heavy workout. I was a vegetarian but have started eating grilled chicken for my protein intake.

'I failed because I was not dedicated as an actor' 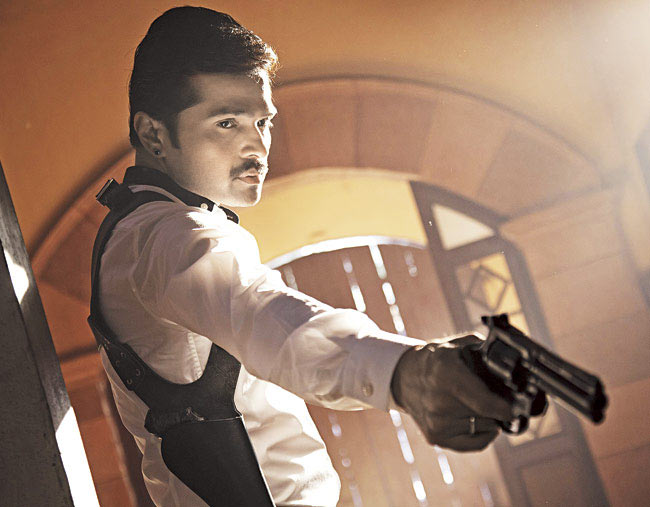 You have received critical and commercial acclaim for your music but you haven’t clicked as an actor. Doesn’t that bother you?

No, it doesn’t. I have given many hit songs. As an actor, only one film worked.

I am sure this film will work.

I failed because I was not dedicated as an actor. I sing, compose music, act and produce films all at the same time.

I am inspired by Kishoreda (Kishore Kumar), who was a legend in everything he did. As an actor, I don’t think I can even be half of what he was.

I am going to give my best to every film I do, so that I am not ashamed of my own work.

I have given 100 per cent to this film though the result is not in my hands.

I have decided that as an actor I will do only one film a year.

As far as the music is concerned, I have Humshukals and Kick, which are releasing soon.

Do you think your decision to become an actor was correct?

If you think you can do something then why not?

It happens in the West where actors also try their hand at direction or production or directors become actors.

Here it takes times to get acceptance. My debut movie as an actor, Aap Kaa Surroor, was a hit, but after that my films didn’t work.

This whole game of hit and flops will always be there and I have survived because I am a hit. I am confident that Xpose will do well. 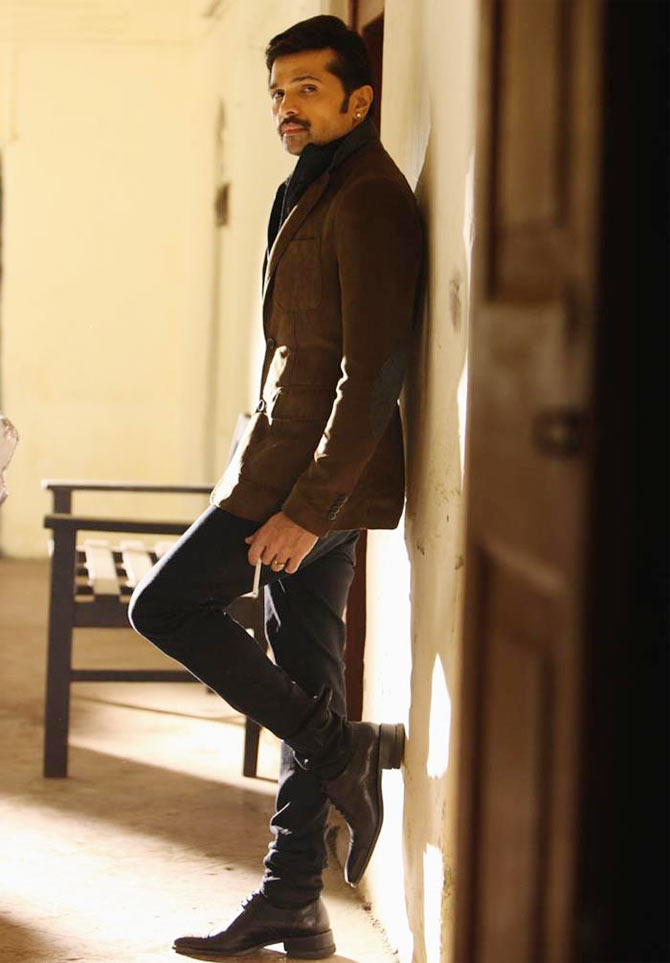 Is your character based on the later actor Raaj Kumar?

The script is inspired by real incidents but it is not a biopic on Raaj Kumar.

He was an ex-cop turned superstar. My character has shades of a superstar but it cannot be directly compared to Raaj Kumar.

It is a hardcore masala film but at the same time it’s a real film.

National award wining director Anant Mahadevan has treated it in a real way.

It is a murder mystery set in the late 1960s when the film industry was getting bold.

There was a conservative atmosphere in the industry but two leading ladies, Zeenat Aman and Parveen Babi came in and changed the whole scenario.

Back then, actors were known as superstars and films were made on a larger than life scale.

Many people found the trailer very spoofish. It is hard to ignore that the film copies from the Hollywood film The Great Gatsby.

Everyone has their own point of view. I am not worried about the negative opinions.

I feel there is a buzz about the film. The real challenge for me is to be appreciated for my acting. 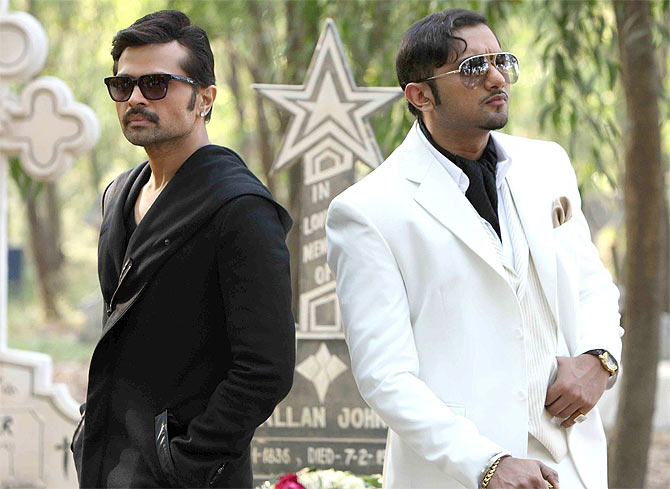 Image: Himesh Reshammiya and Honey Singh in The Xpose

What made you rope in Honey Singh as the main antagonist?

He is a very good actor. He will surprise everyone in this negative role.

He is the highlight of the film; the most lovable villain since Shah Rukh Khan in Baazigar.

He plays a music director who sells the same tune to two producers and is dating two women at the same time.

The way we both have worked for this film, I think besides the music, the movie will also work.

Irrfan Khan was unhappy that he is on the film’s poster when he is just playing a cameo role in the film.

We have spoken after that and everything has been sorted out.

We were not projecting him as the main lead. He has made a special appearance which was mentioned in every newspaper and interview.

It was just one particular poster. We have 10 more posters. I think it was a media-blown thing. He agreed to be a part of the photo session.

'Salman Khan is the biggest superstar' 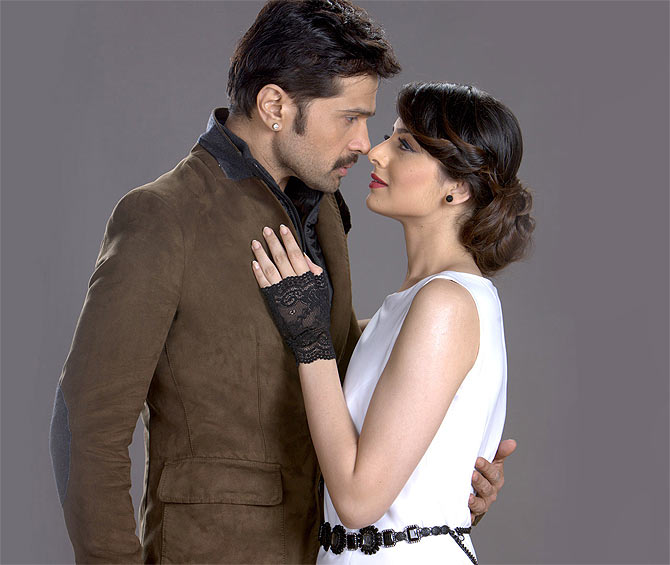 Image: Himesh Reshammiya and Zoya Afroz in The Xpose

You mentioned that the film is set in the 1960s when there were many superstars. Who do you think are the superstars today?

Salman Khan is the biggest superstar.

Salman is planning to write the lyrics for one of his upcoming films.

He is a legend. He can do anything and be good at it.

He is the best brother I can have. I am indebted to him for whatever I am today and also to the entire Khan family for giving me a break.

He is a genius and he knows his job very well.

He surprises every year with something new. That is why he is a superstar and will continue to survive for another 50 years.

He has the knack of connecting with the audience. He is the most lovable star.