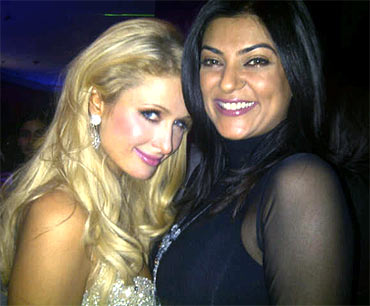 Bollywood pretty much snubbed Paris Hilton when they boycotted a party hosted in her honour at J W Marriott over the weekend.

Actors like Arjun Rampal, Abhay Deol, Neil Nitin Mukesh, Dino Morea and Imran Khan were apparently invited for the party but did not show up.

Sonakshi Sinha cited Rowdy Rathore's shoot as the reason. 'Off to shoot Rowdy Rathore tonight. Will have to skip seeing Paris in Mumbai,' she tweeted.

Sushmita Sen, on the other hand, did show up for the party, and tweeted about it. 'Had a fun party last night..here's a moment captured with Paris specially for my daughter Renee:)' she tweeted with the picture (left).

Bipasha Basu enjoyed Paris' company too. 'Had a crazy fun night out after ages!Let my hair down a bit!Paris Hilton is a total party girl!' she wrote.

Pooja Bedi tweeted: '@parishilton complimented my sari:) said it was Beautiful:) told her the rocky S dress she was wearing was super hot too!'

Paris Hilton was overjoyed with the welcome. 'Wow! What an amazing turnout at my new @PHpurse  Store! Thousands of my fans came to see me. Everyone is so friendly and sweet! Love #India! Love my fans so much! They truly mean the world to me. Feeling so much love in #India!' she gushed on twitter.

Saturday was a sad day for Indian film industry as film producer Surinder Kapoor -- father of popular actors Anil Kapoor, Sanjay Kapoor and producer Boney Kapoor -- passed away at the age of 84. Stars tweeted their condolences.

Anupam Kher was sad to hear the news. 'Surinder Kapoor Ji, Boney, Anil and Sanjay Kapoor's father passed away. He was a large hearted, always happy man. A Great host. So SAD. RIP,' he updated.

Farhan Akhtar tweeted: 'Condolences to those bereaved by the passing of Mr. Surinder Kapoor... RIP'

Vivek Oberoi wrote: 'RIP Surinder Kapoorji. My condolences to the family during this difficult time.' 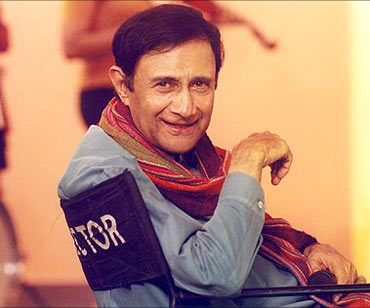 Anupam Kher recalled his childhood as he wished. 'Dev Saab is one of the main reasons of me being in films. Bunked school to Watch his movies. Happy Birthday YOUNG man. You inspire us.:)' he wrote.

As for Dev Anand, he was overwhelmed with the wishes. 'Thanks to all of you for your love and all the beautiful birthday wishes. I am deeply touched,' he tweeted. 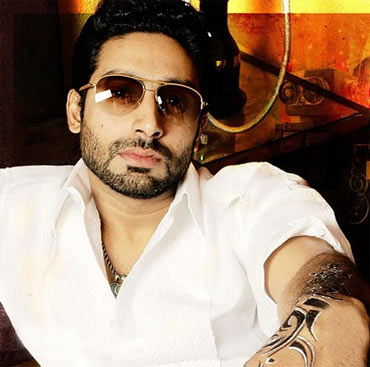 The injuries for the Bachchans just isn't ending! After hurting himself during the shoot of Bol Bachchan a few days ago, Abhishek Bachchan is hurt again.

Abhishek has covered his finger very stylishly. 'My latest fashion accessory! What do you guys think? Potential to start my own accessory line?' he wrote with the picture.

As for Amitabh's back injury, it will take time to heal. 'For fractures in the rib nothing can be done as treatment .. suffer the pain for another 3-4 weeks .. it heals on its own ..damn !! But the brighter side is that shot for 'Department' and it was a song and dance sequence ..went off quite smoothly without incident !' he updated.