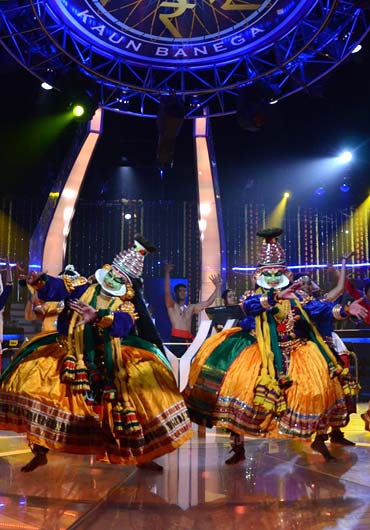 Image: On the sets of Kaun Banega Crorepati 5
A Ganesh Nadar in Mumbai

"Don't scratch your head, don't scratch your nose and don't put your finger inside your a suddenly! Remember, the cameras keep panning the audience at regular intervals and it will not look good," Raghav -- the show's director -- instructed the audience that had assembled to participate in India's most popular show on television, Panchkoti Mahamani Kaun Banega Karodpati.

Film City in Goregaon (east), is a distant suburb of Mumbai, a hilly region with lots of greenery. It is also isolated from the hustle and bustle of the city that never sleeps.

The studio was already packed on a Saturday morning at 11 am. One of the organisers pointed out that they don't pay the audience because everyone was there to see Amitabh Bachchan. Agreed! You don't need to be paid to see the living legend.

There were about 250 people in the audience. In one of the front rows were four people in white dhotis and white shirts. Raghav was disappointed. "This will show all white on camera, you must move them to different locations and not all together." 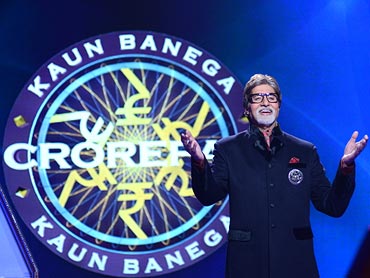 Image: On the sets of Kaun Banega Crorepati

They shifted happily; after all they would still be in the audience though not in the direct gaze of the camera.

After many a slip between the seat and the occupant, we finally settled down. "Look to your left, look to your right, look ahead and look at the back. Identify who your neighbours are, and remember this will be your seat till the end of the show," Raghav again.

"Let me introduce you to the show, you are all our guests, you are all here to see Amitabh Bachchan and KBC and you must show how happy you are when you see him. Will you do that?"And then, "Are happy to be here?" he asked. "Yes," the audience said.

"NOT like that, I need more energy, your energy should encourage the contestants and I cannot hear you."

"YES!!" screamed the audience. Raghav smiled. "That's good, but I could not hear any noise from this section." So that particular section screamed "YES!!" to his satisfaction. 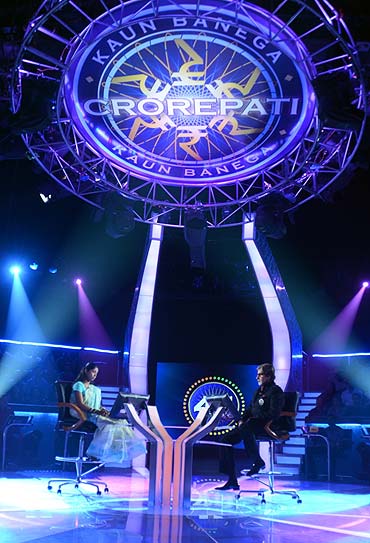 Then he taught them how and when to clap. "When Amitabh Bachchan comes in you must clap hard till he puts up his hand, then there must be silence when he speaks. You can clap again after he stops speaking."

"When Mr Bachchan first walks in you can also scream, Hoooo! and Ha.... But NO WHISTLING... this is a family show."

He then pointed to a corner where he would be seated on a staircase.

"I will be sitting here, please clap when I start clapping, stop when I do this" he made a show of bringing both his palms down "and when I start dancing like a madman like this" he started swinging both his hands up and up, "it means I want you to clap very, very hard and also make a lot of noise." Raghav instructed. 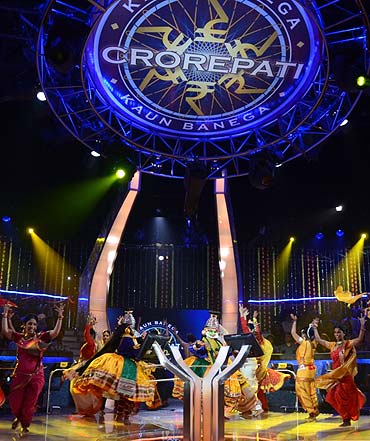 "When Amitabh is signing a cheque and giving it to the winner, he signs, then stretches out to give it to the contestant who accepts it, they hold it for a moment and then the contestant puts it down, the entire process takes 30 to 45 seconds and you have to keep clapping the whole time, maximum applause when the contestant takes the cheque in his hand."

Raghav had also re-arranged the audience according to the colour of the clothes they were wearing. Now you could see Red, Green, Orange, Grey, Blue at regular intervals. The effect was mesmerising and uniform. He had not asked anyone to dress up in a particular colour; he had just managed with what he had.

"Today is a special day because of the Dashera festival, so we will have a dance performance, then Mr Bachchan will come, he will introduce the show and then we will take a one hour break and after that we will come back for the actual game show." 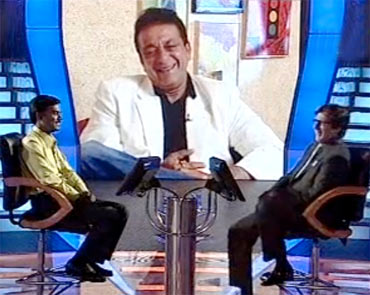 Then the dancers took the floor. They were dressed to represent different regions of the country. They performed to a song specially written for this show. They were smart, beautiful, and performed enthusiastically even though they had to do it five times.

He walked in without any announcement. Amitabh Bachchan. The atmosphere was electric. The audience erupted and the noise level was sky high. The energy level rose to an all time high.

One man fixed a mike to Amitabh's collar and then he fixed something else in his belt. He had to pick up Amitabh's coat-tail for that, which the audience found very amusing. Another man was spraying Amitabh's hair while a girl was re-arranging his collar.

He smiled at all sections of the audience who were standing and cheering. He told them to sit before asking, "Where is the prompter? I cannot see it from here." 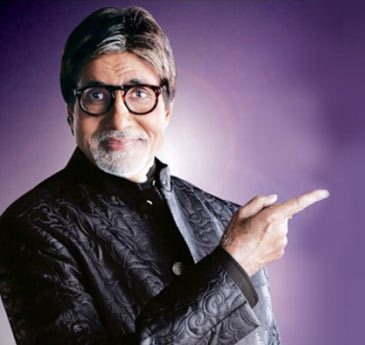 There were two tele-prompters in two alleys and now they put on the third. Amitabh went to the position where he was going to start and did some impromptu jogging to warm up. The audience started clapping in joy.

He announced the show in his inimitable manner and went off stage. Next the dancers came in and performed. It ended with Amitabh walking in and standing in their midst. He was holding hands with two of the performers.

There was huge applause as the director said, "Dancers, you are supposed to leave the floor once you are done." Amitabh responded, "That was my fault I was holding their hands so they did not leave." The audience erupted with laughter. He had them eating out his hand.

The next take went well and then it was time for the lunch break. 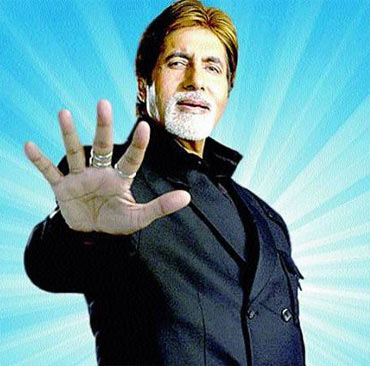 Backstage the dancers were crowding around Amitabh. They took turns standing with him on either side and taking photographs. He smiled patiently till they were all done.

"DO NOT drink too much water," Raghav was back in command. He made the audience leave one row at a time and they were led to the dining area. Buffet vegetarian lunch for everyone and not too much water. Small bottles of mineral water were provided with the unlimited lunch.

When the audience re-assembled, they got their first glimpse of the contestants. Raghav was giving them instructions. Then he put them in the hot seat one a time. He played the game with them, he played the part of Amitabh Bachchan and they played their own part.

Some he asked two questions and some three depending on how many were required to get them to relax. One of the contestants felt that the floor was too far below the hot seat. Raghav assured her that she would be standing on solid glass and she would not fall through.

When he was finished with the contestants, he came back to the audience. "Now that you have had your lunch you must be full of energy, let us hear you clap." He wasn't satisfied. "Raise your hands in front of you, now raise it above your head, now you won't feel sleepy, are you satisfied or would you like to repeat it five times?" 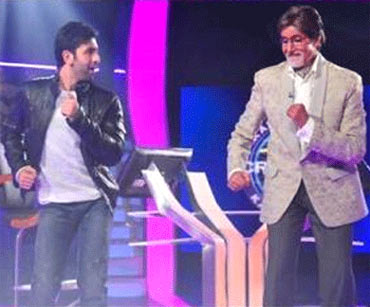 Image: Ranbir Kapoor and Amitabh Bachchan on the sets of Kaun Banega Crorepati 5

The audience clapped and screamed till he was satisfied.

Raghav told the audience that they would be given water. "It will take us 45 minutes to give you all water so wait patiently. Now that the break is over you have to remain in your seats."

"Sab kuch badal gaya," he said. He was told that he had to go from one contestant to the next and introduce them to the audience. He checked out all the points and made sure that he could see the prompter from every angle.

He had to introduce the contestants with live music playing. He wanted the audience to participate. Though the audience had been instructed to clap, Amitabh told them to slap their thighs instead in tune with the music. The effect was much better than clapping with their hands.

Amitabh also tapped his thigh with one hand as the music played. Swaying to the music he introduced the contestants. He had to go from one to the next and twice he got the order wrong. "Make sure the prompter matches the contestant I am standing with. I don't want a man's name coming up when I am with a lady," he said as the audience roared with laughter. 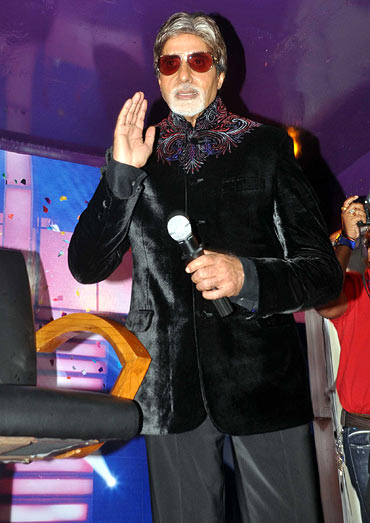 When the cameraman was between him and his prompter Amitabh told him to move to his left, in the same beat as the music. This took quite a while. "I think we should change the name of the show to Kaun Banega Dance Crorepati," he said.

Then he wanted to know, "Are we going to be doing this all night or are we going to play the game?" Finally he had introduced all the contestants and the show was ready to take off.

One of the cameras is mounted on the crane and it has the habit of swooping suddenly right up to the hot seat like a giant anaconda.

Even after 40 years in the industry, he has not lost the innocence of a child.

His make-up man came to him frequently, handed him a mirror, fiddled with his hair or powdered his nose. One of the contestants gave Amitabh a turban. He wore it and then took it off. His hair was thus dishevelled. 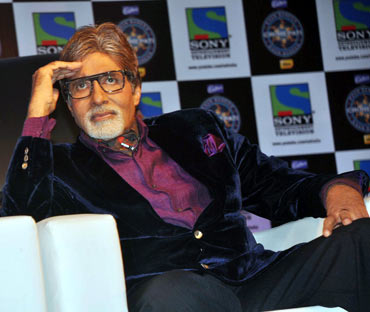 The audience had been here for almost seven hours. At one stage the clapping became softer. "The audience is very silent. Why?" asked the Big B. The next time they had to clap, they brought the roof down. Amitabh smiled at the way they had responded to him.

At the end of the day's shooting, the audience had been promised photos with Amitabh. This he did by posing in front of the audience where they were sitting. He moved from place to place till the entire audience was covered.

Then he left to thunderous applause. Raghav did not say a word as another organiser, Smita, led the audience out.