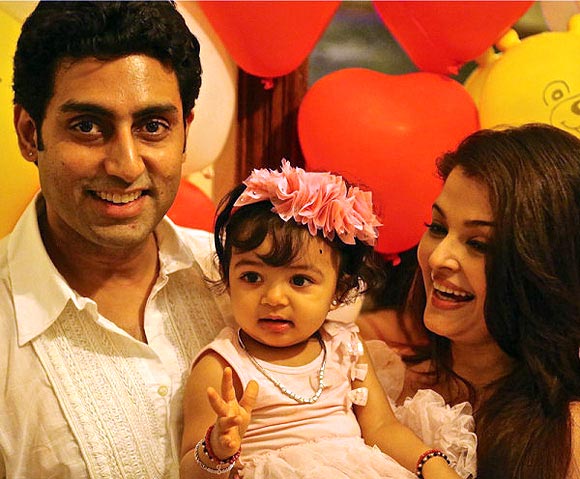 Image: Abhishek, Aaradhya and Aishwarya Rai Bachchan
Subhash K Jha in Patna
Abhishek Bachchan, who tasted box office success with Rohit Shetty's Bol Bachchan after a series of flops, is getting ready for one of the biggest films of his career thus far.
Dhoom 3, third film in the successful franchise, promises to be bigger and snazzier than before with Aamir Khan and Katrina Kaif joining the starcast.
The actor, who recently turned 37, talks about his films, fatherhood and other good things in store for him.

This year you turned 37. How does it feel to be older?

It's no different from 35 or 36. I am still doing what I love doing the most. I still shoot my films the whole day and then return to my family.

Now there is more in the family?

Yes, Aaradhya is the centre of our universe. She's a wonderful child. All credit to Aishwarya for being a terrific mother.

Has fatherhood changed you?

Of course it has! Bringing a child into the world changes all your priorities. I am sure every parent would agree.

Are you now more eager to reach home than you used to be?

I wouldn't say that. It would be very unfair to the rest of the family. But yes, I have one more reason to reach home quickly.

Besides Aishwarya who are your favourite co-stars?

John and Uday. Jokes aside, I've enjoyed working with each and every one of my co-stars.

By the grace of God I have so far not had one unpleasant experience.

That says more about you...

If you say so.

When do we get to see Aishwarya and you together again?

Very soon, I hope. I really enjoy working with her.

We get a lot of fan-mail asking us to be together again on screen. We would be more than glad to get together.
Tags:

'I can't wait to work with my father again' 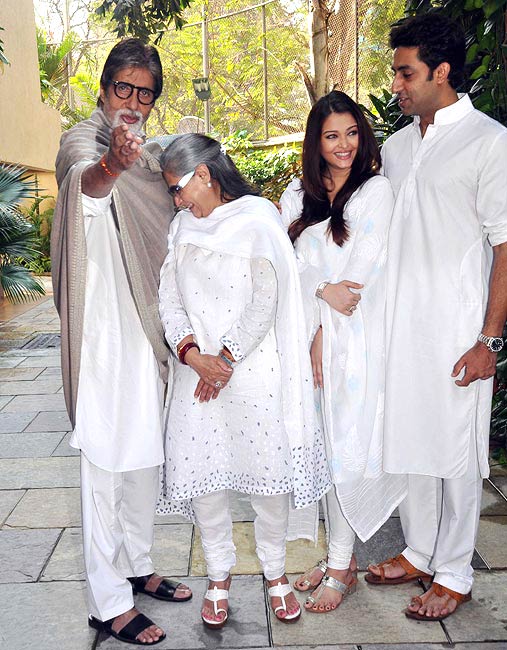 Can we hope to see you and your Dad together again soon?

We want to do a film that would inspire both of us.

Which is your favourite film with your Dad?

I have enjoyed each and every moment with him on camera. I have learnt so much from just sharing camera space with him. I can't wait to work with him again.

What plans for your production house AB Corp Ltd?

We have just released a Gujarati film Saptapadi. But that was my mother's baby.

I am sure we will be producing films where I can express my own impulses as an actor.

This is a very exciting time to be an actor.

Your dad is going great guns at 70. What do you think you will be doing at that age?

I hope at 70 I will be spoken about in a similar manner. But there can never be another Amitabh Bachchan.

His preparation and dedication took him where he is. We can only emulate him. Give our hundred percent to our work.

Did you watch him on Kaun Banega Crorepati?

Oh, religiously. His connectivity with people is spontaneous.

I also consider myself a people's person. I don't have a problem with social skills. I am very comfortable around people. And I like them to be comfortable with me. 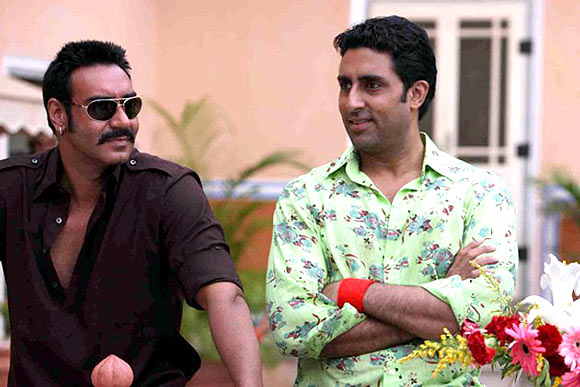 You recently joined the 100-crore club with Bol Bachchan. Does that give you a sense of renewed self-confidence?

It doesn't matter which club an actor belongs to. He still approaches every role with the same trepidation and waits with fingers crossed for the audience's verdict.

I don't think reaching the 100-crore mark is a signal for any actor to get more confident. I think the 100-crore club is the new substitute for what the silver or golden jubilee used to be in Pa's time.

Would you say that many times films that make it into the 100-crore club are the least deserving of success?

I think that's very unfair. At the end of the day if a film does well it means the audience wanted to see that film. How can we question the audience's tastes?

Sometimes we forget that cinema is about entertainment. It's about giving people their money's worth. The audience's taste shouldn't be undermined.

I understand cinema is an art form. But audiences spend their hard-earned money to see films. If they are entertained by a film, we are no one to question their choice. And look at the diversity of films that have done well recently!

Generally, the films that do well are devoid of aesthetics.

No, I disagree with you.

So are you doing more films with the president of the 100-crore club, Rohit Shetty?

Well, Bol Bachchan was my second film with Rohit and Ajay Devgn. I was in Rohit's first film Zameen, which also starred Ajay.

It's a joy to work with them. I'm thankful to both for thinking of me, for giving me Bol Bachchan. I had a ball doing it.

How tough was it doing comedy in Bol Bachchan?

Very, very tough. As an actor I had to depend entirely on the written word. In a dramatic performance you can depend on your silences to see you through. Not in a comedy. All the humour comes from the spoken word.

My only proof that my performance was working was my crew and others on the sets. They seemed to be enjoying what was going on. 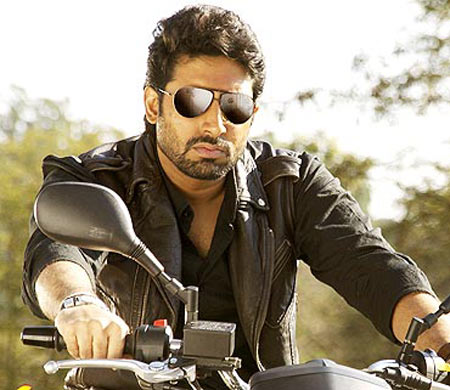 Are you excited about Dhoom 3?

Oh yes. It's shaping up very well. We're bang in the middle of the shoot. And it will be releasing for Christmas this year.

I am excited. Dhoom is like coming home for me. It's wonderful to be back in the franchise with Uday Chopra.

In fact, you and Uday are the only constant actors in the series.

In all modesty, I don't think there would be a Dhoom without a Jai and an Ali. So going into another Dhoom film is like continuing with the adventures of Jai and Ali.

You are also part of Dostana 2?

Yes, it starts later this year. Director Tarun Mansukhani has finally cracked the script and we are all very happy with it.

I appreciate the effort that Karan Johar and Tarun have put into ensuring the sequel moves ahead of the first film.

When a film is as successful as Dostana, it is very tempting to follow it up quickly with a sequel. But history has taught us to be very careful about the sequel. One can't just cash in on the success of the first film.

I really laud Tarun for patiently working on the sequel for five years until he got it right.

There was a time three years ago when we thought we had cracked the sequel. But it didn't work out. But Tarun was determined to get it right. There's no point in doing it otherwise.

How tough is it for you as a heterosexual man to pretend to be gay in Dostana?

Isn't that what acting is about? I have played a thief, a thug, a politician, a freedom fighter. I am none of these.

What would be the USP of Dostana 2?

That Tarun, Karan, John and Abhishek are back together. Trust me, it's a really funny script. And I always believe the script is king.

You've done dark-toned film and now you're doing lighter ones. Which is easier?

I find every kind of film equally challenging. Each time I push myself harder. 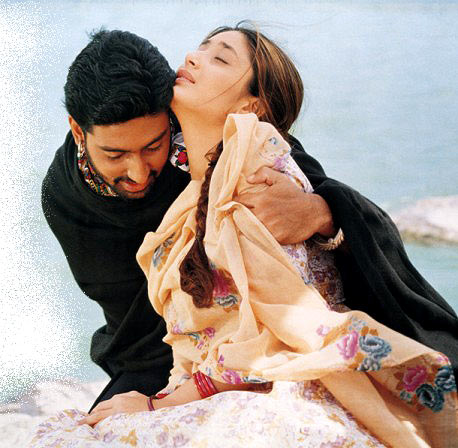 Your journey from Refugee to Bol Bachchan, has it been tough?

I don't think it has been a especially troublesome journey. Every actor goes through his share of hiccoughs. Why should it be any different for me?

The fact that I'm still around after 13 years means I'm doing something right.

What about choosing wrong scripts and rejecting right ones like Lagaan and Saathiya?

The past is better left where it is. I have no regrets.

And, by the way, I think I have a very good script sense. Sometimes you do a film for emotional reasons. I agree I should be ruthlessly professional, but I am not. And I am not making apologies for it.

I guess the way I work makes me who I am. I don't regret doing any of the films I have done. I have always worked from my heart. That works for me.