What will Saiyami play next?

'Nothing comes easy, but I knew what I was getting in to.' 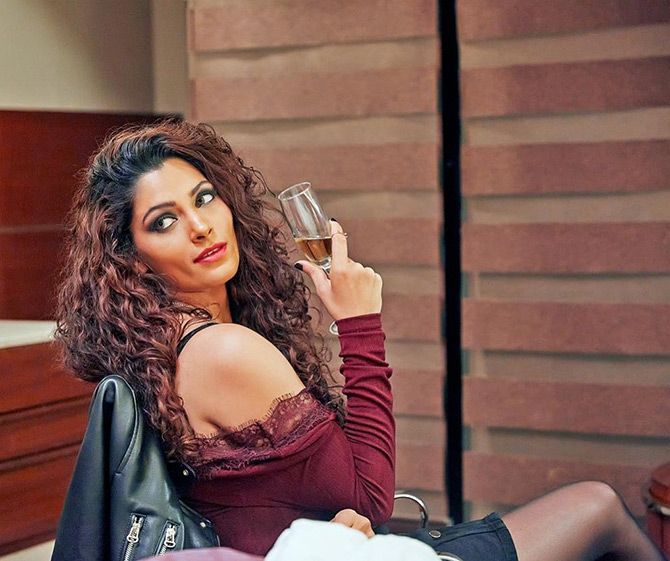 IMAGE: Saiyami Kher plays Shirley in Breathe: Into The Shadows.

After Saiyami Kher began her Bollywood career with Rakeysh Omprakash Mehra's Mirziya in 2016, she had to wait a long time to bag her next projects.

But this year has been good for the bubbly actress who can currently be seen in three Web shows, playing three contrasting characters.

From a special agent in Special Ops to a bank clerk in Choked to an escort in Breathe: Into The Shadows, Saiyami has surprised audiences with her versatility.

"It's a very new feeling because people have really appreciated my work. I didn't get that with my debut film," Saiyami -- whose paternal grandmother was Bollywood legend Usha Kiran and whose paternal aunt is actress Tanvi Azmi -- tells Patcy N/ Rediff.com.

Special Ops, Choked and Breathe: Into The Shadows... , you have back-to-back releases. How did you turn your career around?

'Turned my career around' is a very generous term.

It's an overwhelming feeling because the three projects I worked in the last year-and-a- half have all come out in a span of four to five months.

It's a very new feeling because people have really appreciated my work.

I didn't get that with my debut film.

This is a new feeling and I am really enjoying it.

You signed Breathe before Special Ops and Choked. How did it come to you?

(Casting director) Mukesh Chhabra was auditioning, and he asked me to come.

I didn't know too many details because that's how auditions happen. You are just given a scene or two.

Producer Vikram (Malhotra) and Director Mayank (Sharma) were happy to have me on board after the audition. 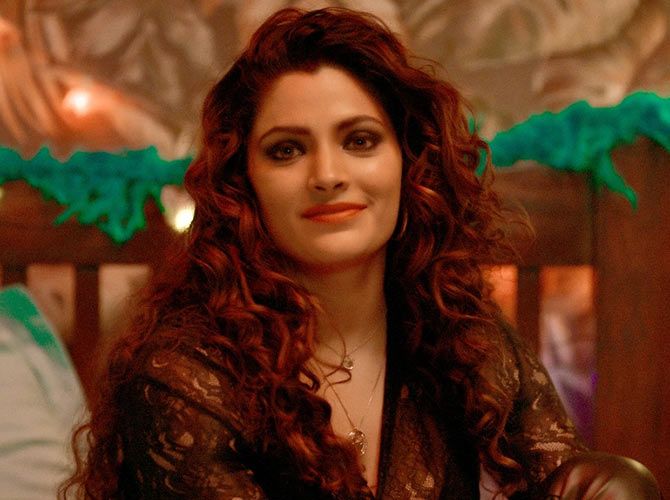 IMAGE: Saiyami in Breathe: Into The Shadows.

What made you decide to debut in the OTT platform?/strong>

Quite honestly, when I signed it, there weren't too many Web shows.

I don't think Sacred Games or Inside Edge had come out.

It was still a relatively new medium.

I did a Marathi film (Mauli), which I was very happy to be a part of.

Otherwise, the roles that were being offered to me were not exciting at all.

But with Shirley's character -- even though the screen time was small -- I knew it was an important role in the series.

Shirley is an escort. How did you prepare for the role? I hear your inspiration was Julia Roberts from Pretty Woman.

Yes, that was the reference point that Mayank had in mind.

It's a very exciting reference point because that's one of my favourite films.

So with regard to the look and body language, that helped a lot.

I really enjoy going into the back stories of every character.

That's a process I enjoy.

So I built a long story -- when she was younger, her equation with her parents, what happened with them, why she is doing what she's doing... that really helps me in my process of working. 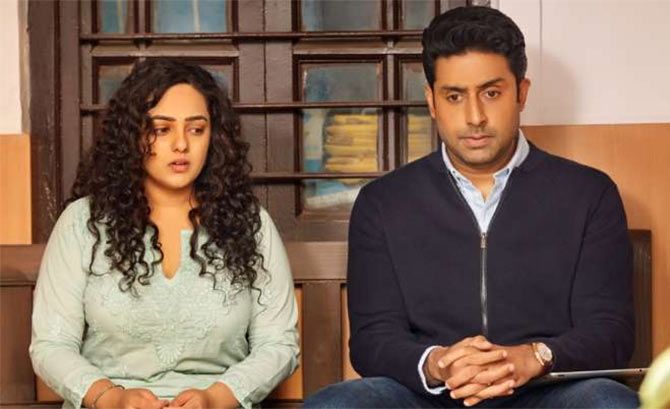 IMAGE: Nithya Menen and Abhishek Bachchan in Breathe: Into The Shadows.

What feedback are you getting?

The honest response to my character is that it's a really small role.

The show ends with me, so they expect to see more of me in the next season, if that happens.

But everyone has liked my work. They are comparing it to Choked where I looked very different.

The role were very different, and that's why people are liking it -- they are comparing it to Special Ops too.

People are saying, you are very versatile, which is the best thing an actor can hear.

How was it working with Abhishek Bachchan and Nithya Menen?

Abhishek and I hit it off from the word go.

I met him a few times and we watched a few football games together.

We have a lot of common because we really love sports.

When we were shooting, there would be a lot of discussions on sports.

He was great fun. There was never any attitude, no seniority problem.

He is really sweet and wonderful to be around.

He loves his food -- he used to get some great food on set.

He is a very supportive co-star too. A lot of times, bigger actors don't like to stay for like close shots and they have lots of things to do.

But there was none of that here.

He was a really supportive co-star.

Everybody has really enjoyed Nithya's body of work in the south.

I am really glad that her audience has expanded and people here are seeing how great she is.

Working with her was fun because she is an effortless actor.

Abhishek tested positive for coronavirus right after the show went on air.

I hope he has a speedy recovery.

The nation is praying for him.

We wish Amitji and him to come back soon. Everybody took note of you in Special Ops, Will we see more of you in season two?

We hope that season two gets bigger and better.

I always joke with Neeraj (Panday, director) sir that I wish I was doing more action, and so he would keep saying, 'Ruko, ruko karenge.' How did Anurag Kashyap approach you for Choked?

I was watching a movie at MAMI, and he was sitting next to me.

He asked me if I would do a film. It was as simple as that.

Then he send me the script. I loved it.

I was playing the central character; the film was riding on her shoulders.

It was such a complex character.

Anurag was directing it, so there was no reason to say no to it.

He had offered it to me in 2017, a year after Mirziya, but we ended up shooting it two years later.

Have you started getting more work?

Special Ops was watched by a huge number of people... I am saying this purely based on the social media response I got.

I was the protagonist in Choked. People saw me in a different avatar.

It was a de-glam look, and people didn't imagine me like that.

They didn't think I could pull off a role like that.

A lot of people called me and said appreciative words.

Film-makers I have admired messaged me and said they liked my work.

Work wise, I haven't signed anything because I think the market is still very slow.

But I am positive.

I hope that the work in the last four to five months will get me more exciting work.

Your acting coach is actor Adil Hussain. How does he help you?

My journey with him has been thanks to Mirziya.

I was sent by Rakeysh (Mirziya Director Rakeysh Omprakash Mehra) sir to Delhi to train with Dilip Shankar and Adil Hussain for three months.

Their ways of teaching are very different because he comes from a very strong theatre background.

I never go to him with a role, I have never done that.

We do a whole lot of exercises.

Even in lockdown, I pick up a monologue or certain writing and keep working on it.

I do voice exercises, different kinds of acting exercises.

It's not for any show, it's for improving myself. 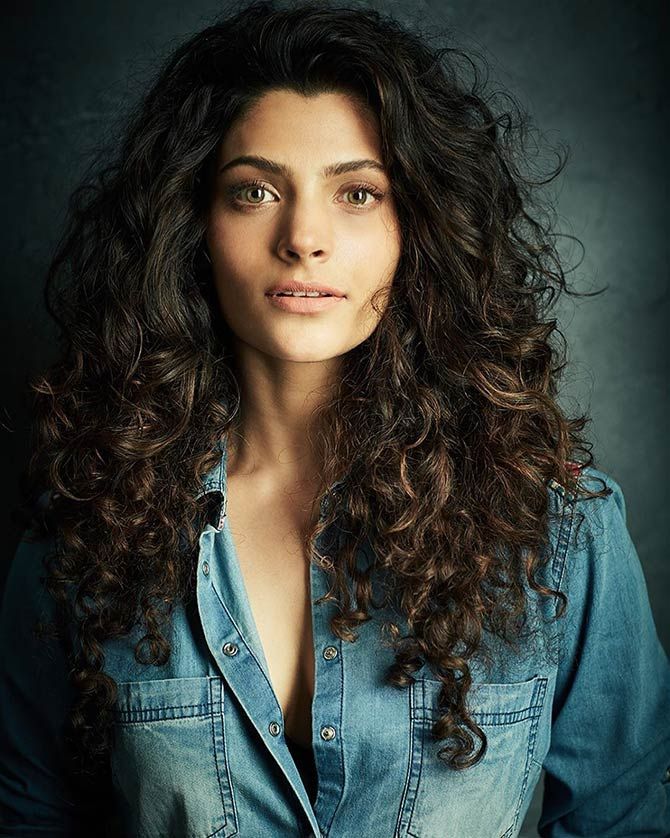 Before the lockdown, what were you working on?

I was shooting for a Telugu film with Nagarjuna sir. We have finished 80 percent of the film.

It's called Wild Dog, and is directed by Solomon.

How has the lockdown affected your career?

I think it has affected people in a lot of ways.

With regards to my career, my shoot has come to a halt.

I haven't signed anything new.

I haven't had any concrete meetings.

But I have used this time to work on myself.

I have done Zoom calls with people I want to learn from.

I am trying to keep myself occupied and see how I can work on myself.

How are you spending this time?

I have been very fortunate. I came to my parents' home in Nashik.

I am doing running; I have space to run around the house.

I work on my voice and my acting for two to three hours.

Then, of course, there's housework to do, which keeps everyone busy.

I am spending time with my family, which I enjoy. It's been five years since your first Telugu film Rey released and four years since Mirziya. How has the journey been?

It has not been easy at all.

It's been a difficult journey.

I had to wait to get my debut film. But that did not work.

The wait after that was even longer.

Nothing comes easy, but I knew what I was getting in to.

Ups and downs are a part of the industry, it doesn't come as a surprise at all.

I want to do exciting work.

I hope to do a Malayalam film, a Tamil film.

I hope to work abroad.

I want to play different and exciting characters.

No. The only regret would probably be that I had utilised time a little better and worked on myself.

I keep wanting to improve myself as an actor.

I feel like maybe I should have used time more effectively. 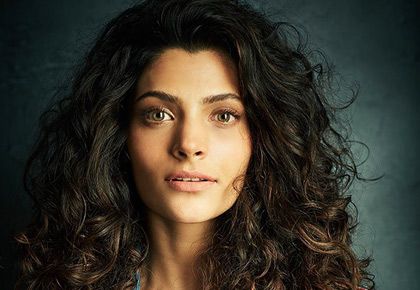