Ajay Bhuyan manages to make Dhada slick and stylish with good orchestration of action sequences, cinematography and foreign locales, but ultimately it is just old wine in a new bottle.

The film begins with Vishwa (Akkineni Naga Chaitanya) chasing some people who have robbed him and catching them. He then goes off to the US for his graduation ceremony and leads a happy life in that country with his elder brother Rajiv (Sriram) and his wife Preethi (Sameeksha).

He is scheduled to go back to India when he sees Rhea (Kajal) at a skating rink and it is love at first sight for him.  In the meanwhile a frightened girl runs up to him asking him to rescue her from three guys who are about to take her to their boss RD (Rahul Dev) who deals in human trafficking. RD was to make a deal to sell 100 girls to Kelly (Kelly Dorjee) but the plan is foiled by Vishwa. RD is furious and is on the look-out for him.

Vishwa tries to get friendly with Rhea whose father wants her to marry businessman Amit (Eijaz Khan), but she is reluctant.
The first half of the film makes for a decent watch as it's fairly fast paced, with some thrilling action. The film slows down in the second half. Brahmanandam tries to inject some humour but it seems over-stretched and inane, especially his chocolate act, and the scenes with Ali and the tiger are amateurish and unnecessary. In fact, having comedians like Venu Madhav and M S Narayana is a waste because they have nothing much to do.

Director Ajay Bhuyan seems to have concentrated more on the technical aspects of the movie than on the plot. Be it the action sequences (by Pradit Seelum of Thailand) with a slightly edgy 'Hollywood' feel captured by the excellent camera work of Gnana Sekhar, or the editing of Dharmendra Kakarla, the film shows technical finesse. The story line, though, is run-of-the-mill and the important issue of human trafficking is dealt with in a very simplistic way.

Naga Chaitanya turns action hero with this film. His dancing is better, and with more vigour and overall he does well as Vishwa. Kajal Agarwal looks pretty and plays her part well.

Sriram and Sameeksha give adequate performances. Kelly Dorjee and Rahul Dev do justice to the villainous characters they are meant to portray.

Overall Dhada lacks punch and is only an okay watch. 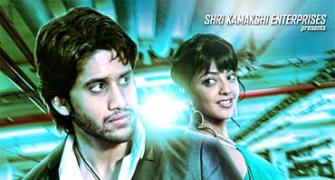 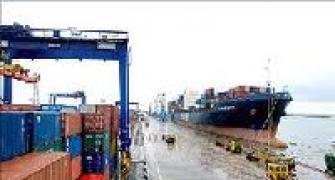 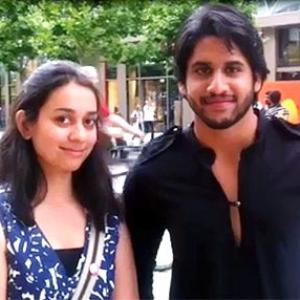