How the Besharam title track was made 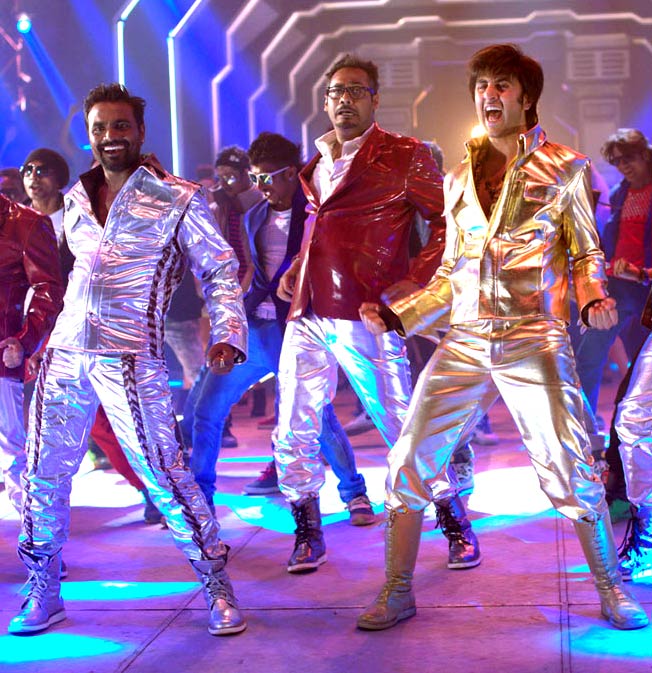 The music composers and the singers of the song, Shree D and Ishq Bector, tell Patcy N about how they came up with the song:

“How we got the Besharam project is interesting. We were fixing an appointment with (director) Abhinav Kashyap. The producer of the film, Himanshu Mehra, is our friend. As soon as he got the Besharam title, he told us to jam to the title track, use this word and just make up something.

“So we both made up something. When Himanshu heard the music, he loved it. He said, ‘I can tweak this as I know Ranbir’s character and I know what Abhinav will like,’ says Ishq.

Then Himanshu wrote the lyrics of the title track. Ishq and Shree reworked the song, and played it for him, who approved of it and it went up to Abhinav Kashyap.

Abhinav did not like the song when he first heard it. When he took it home and played it again with his kids, the youngsters seemed to like it and began dancing to the song. Abhinav decided to give it a thumbs up.

The song also got the approval of Lalit Pandit who was composing the music for the whole film, and Ranbir Kapoor, the star of the film. “The song was made even before the film was made,” says Shree D.

'We did a gangster track for Satya 2'

“The guy who plays Satya in Satya 2, Puneet, is my buddy. He told us that Ram Gopal Varma has a different music director working on the film. They wanted a gangster track. We worked on it for a week. He heard it and guided us through as a few tracks of other composers had already been rejected. Our friend Sunny wrote the song and sang it. Ram sir liked the song. We did the second song in Satya too,” says Ishq

Ishq and Shree have just finished their first Punjabi film, Love You Soniye, starring Karanvir Bora and his wife Teejay.

With two new films in their kitty, Ishq Bector and Shree D are flying high but little is known about this composer-singer duo. Like their unusual names, for instance.

“I was born and raised in Canada in a place called Manitoba in Winnipeg. My actual name is Amitabh Sunil Bector. I wanted to make Indian music for a global community so I took the concept of Bollywood and put a new spin on it. In Bollywood, ishq is kambhaqt, ishq is kamina, ishq is in every single song. So I thought of taking the word that everybody knows, and flipped it into something new,” says Ishq Bector.

Shree D’s full name is Shree Dayal “but friends told me to make it Shree D. According to numerology and a Panditji, Shree D is lucky for me,” says the singer from Benaras.

He was in the wholesale cosmetics business and singing composing happened by chance almost.

“I was cycling in Benaras when suddenly I got a tune, wrote the lyrics, and sang the song in front of my family. They loved it; everyone in my house started singing it. That inspired me to take up singing and composing full time. My family supported me.”

He went on to study music, mostly classical. After training for three years in Benaras with Jalba Prasad Mishra, he came to Mumbai. He learnt classical, dadra, and thumri from the husband-wife team of Geeta and Premji.

He came to Mumbai nine years ago after handing over the cosmetics business to his brothers. “My family supported me but other relatives thought I was losing it,” Shree grins.

'I was a professional street dancer at the age of 15'

Ishq Bector trained in an unlikely profession before taking up music full time.

“My formal education is in sports injury and acupuncture. In Mumbai, I worked with Yuvraj Singh, Ajit Agarkar, and Ashish Nehra,” he says.

When he decided to come to India from Canada, his parents were sceptical. “My parents are originally from Punjab so they have this notion that if you go to Mumbai you will get spoilt, you will get into bad company and do drugs and get robbed. I was allowed to come to Mumbai after finishing my education. That was eight years ago,” Ishq recalls.

The music making, though, had started before that and in a surprising way.

“I was a professional street dancer at the age of 15. I started touring with groups and then I would write part of the songs with them. They told me to rap. I started doing cameo appearances in rap songs that they did in their shows.

“By the time I left high school, I wanted to learn how to make a song from beginning to end. So I learnt how to write, produce, and compose a song. I took a couple of years to understand the whole job because I did not have any formal training.”

As a graduation gift, Ishq’s father enrolled him in Roshan Tarneja’s acting institute. “He told me if you are going to Mumbai you may as well make filmy contacts. I started doing a lot of production work for television.

“After I released the song Aye! Hip Hopper with Sunnidhi Chauhan, I started working with music directors like Pritam, Sajid Wajid, Vishal Shekhar and Anu Malik as a programmer or doing vocals. I told them it is okay if they pay me or don’t pay me, give me credit or don’t give me credit. I just wanted to learn.”

'It took a lot of time for us to get success'

It took Shree and Ishq about eight or nine years to establish themselves in Mumbai.

“It took a lot of time for us to get success, but in the meanwhile, we were learning. I did a lot of work for Disney. I went to studios and sang scratches for them. I got the experience of working in a studio. Ishq and I were working separately. We would sing. We both did all kinds of work from helping in production, composing, programming to support ourselves financially,” says Shree.

Then Ishq met Himesh Reshammiya who guided them about how music in Bollywood works. “Himeshbhai told me not to just make 20 or 30 songs. When I got through to any music director or film producer I should have at least 200 to 300 tunes ready with me.”

After Besharam and Bheja Fry 2’s Ishq Da Keeda and Burra Na Mannoji Ishq Bector and Shree D are much in demand. “We are not just meeting producers and directors but even stars,” boasts Ishq Bector.