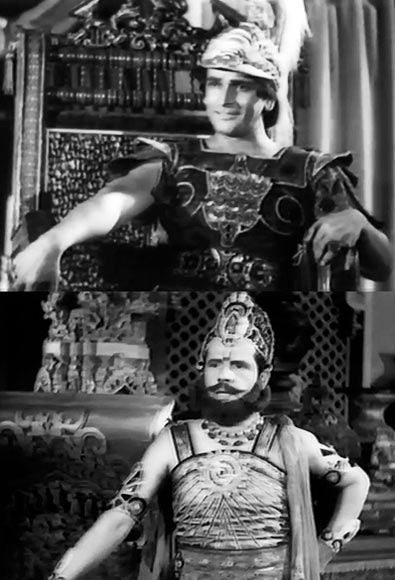 
Sikander ne Porous se ki thi ladayi, jo ki thi ladayi, toh main kya karoon?' shrugged Mohan Choti in a catchy song from Anpadh. If only he had watched Sohrab Modi's 1941 classic, Sikander he wouldn't feel so dismissive about this rousing chapter from history.
I first read the story of Alexander the Great and his encounter with the proud King Porous/Puru in an Amar Chitra Katha comic. And though it's all very simplified for the convenience of its young readers, I, just like the Macedonian conqueror, was instantly bowled over by the dignified biddings of an opponent defeated in war not morale.
Modi's film is obviously a lot more detailed and furbished with rich subtext that blends well-researched facts with plausible fiction to create a solid epic.
Sikander released in1941 -- a time when India was firing on all cylinders to put an end to British Raj and the Second World War was still on. Moreover, its strong nationalistic contents (a mother blesses her battle-bound son to be stabbed in the heart and not in the back) compelled censors to initially ban the film from running in military areas.
Still, Sikander starring Prithviraj Kapoor in the titular avatar was a huge box office success and made available to a bigger audience with its dubbed Persian version.
Tags: Sohrab Modi , Prithviraj Kapoor , Sikander , Amar Chitra Katha , Mohan Choti 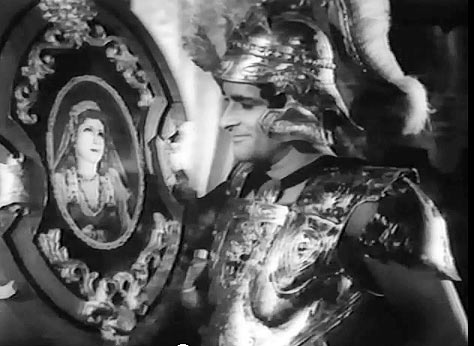 It's rather unfortunate that Modi's extensive work isn't as easily accessible as it ought to be. A dedicated visionary and pioneer in the truest sense and an artiste with one of the richest baritones known to Hindi cinema, one of our earliest legends decorated the repertoire of his studio Minerva Movietone with several memorable offerings under the historical/period piece genre like Pukar, Prithvi Vallabh, Mirza Ghalib, Jhansi Ki Rani and Sikander.
Modi's Parsi theatre roots often dictated his distinctly loquacious style of filmmaking and stage-reminiscent aesthetics. But the kineticism demonstrated in Sikander's magnificent battle scenes verified his command over outdoor shoots as well.
The story begins 'one day in the year 327 B.C. when the Greek flag was flying over Iran,' and establishes Alexander/Sikander as a mighty ruler who worships his guru Aristotle (Shakir) and fawns over his light-eyed love Rukhsana (Vanamala) but is keenly aware of his accomplishments and might.
Almost every sentence coming out of his mouth reeks of narcissism. But Prithviraj Kapoor humanises his pomposity, turns him into someone who isn't self-indulgent on purpose, he just doesn't know better because he is the best. Such arrogance is almost naive.
A 40-year-old Kapoor cuts a regal figure dressed in a typical Greek wardrobe comprising of a short tunic, pteruges, buskins and a flamboyant helmet. His voice doesn't have the firmness of Emperor Akbar (Mughal-E-Azam) yet but conveys a sense of smugness and authority just the same. It's easy to see where his sons -- Raj, Shammi and Shashi -- get the respective attributes of intensity, effervescence and strapping good looks from.
Tags: Prithviraj Kapoor , Modi , Jhansi Ki Rani , Minerva Movietone , Prithvi Vallabh 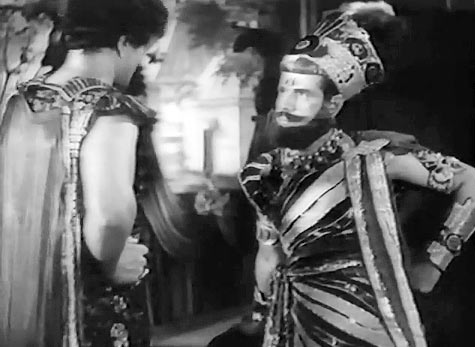 Having occupied Iran, Sikander wants to have power all across the globe. He takes over Afghanistan, heads to India and arrives at River Jhelum (or Hydaspes that flows through India and Pakistan). But the heavy monsoon makes it difficult for the cavalry to cross the river.
Meanwhile, King Porous (Sohrab Modi) is appalled at the prospect of foreign invasion and urges neighbouring kingdoms to forget about their internal differences and tackle a common enemy.
Though some, like King Ambhi of Takshilla (KN Singh), are quick to betray and form an alliance with the cutthroat Sikander. And thus begins a war of ambitious objectives and patriotic ideals between two great warriors and kings leading us to its most-awaited portion -- the face-off.
There are two actually. One where Sikander disguised as representative of himself comes to meet Porous and eventually reveals his true identity.
The second one is, of course, the turning point. A jubilant Sikander asks the beaten Porous, 'Farmaiye, aapke saath kaisa salukh kiya jaaye?' Pat comes the winning line, 'Jaisa ek badshah ko doosre badshah ke saath karna chahiye.'
And while one cannot think of a better Sikander than Prithviraj Kapoor, its Modi's restrained but sturdy histrionics as Porous that steal the scene. Spontaneous, natural acting wasn't the trend back then and it takes about 10 minutes to adjust to Sikander's verbose theatrics. Once you get used to it, there's much to appreciate in the marriage of booming baritone and vigorous physicality.
It's a marvel to witness an actor come alive through those carefully rehearsed lines now spoken with electrifying sentiment and emphasis. It may look deceptively simple but demands tremendous focus, energy and evenness wherein the slightest shift could break the momentum. But since both Modi and Kapoor hailed from a theatre background, their fluency is exemplary.
Tags: Sikander , Sohrab Modi , Prithviraj Kapoor , King Ambhi , Jaisa 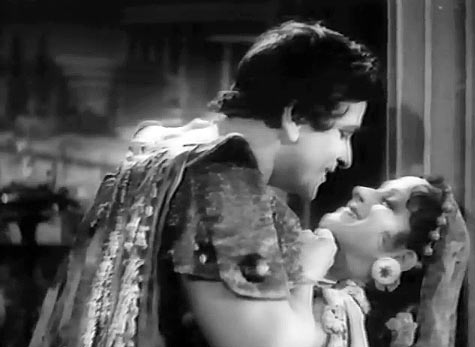 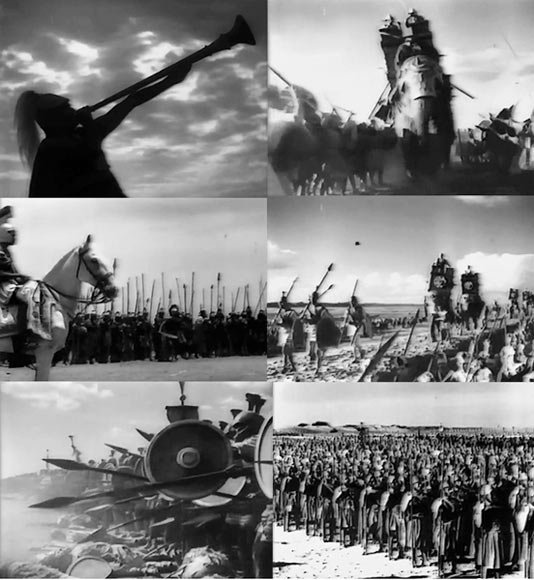 To give you an idea about the enormity of Sikander's scale. The grandly picturised battle scenes in vastly open expanses of Kolhapur feature thousands of extras in costume -- be it on horses, elephants, chariots or foot as part of an approaching cavalcade bearing a remarkable range of weaponry.
Lending the action-packed proceedings a world class look is Y D Sarpotdar's awe-inspiring cinematography. His long shots, wide screen shots, low angles, low-lit captures heighten the impact and offer a majestic view of events that took place long, long ago.
During the Battle of Hydaspes, there's one jaw-dropping sequence where a raging elephant storms towards the camera with astonishing gusto, it's like a 3D moment sans the technology.
Making a film on such a huge canvas and shooting a famous battle with all its strategy and decorum intact -- a neat phalanx of cavalries marching in full strength alongside an infantry of soldiers armed with spears, swords and shields, bows and arrows is no cakewalk.
When a brutal exchange of javelins and arrows, trampling beasts and collapsing horses follow, it's hard to say if Sikander may not have hurt any animal during its filming.
Tags: Sikander , Sarpotdar 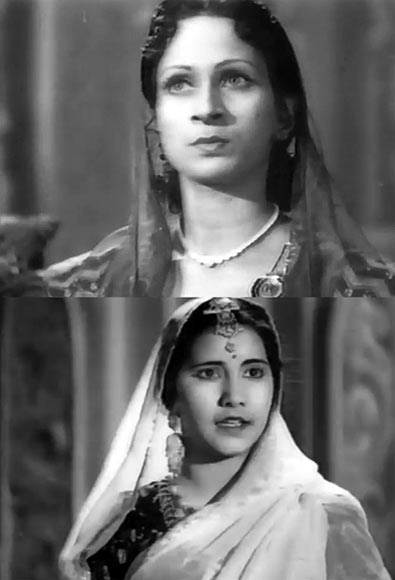 Don't be fooled by Sikander's masculine ambiance.
Here, the women are just as important and represent grace, grit and integrity through varying subjects like relationships, politics and patriotism. Though the needless high-strung delivery of these actresses never matches the proficiency of their co-stars, the avidity of the character they play conceals this deficiency greatly.
Rukhsana tries to seduce Sikander's teacher Aristotle to prove a point and succeeds. She secretly travels to India and tricks Porous into promising he will not hurt her beau by tying the ethically-sound king his first-ever rakhi. She even instigates Sikander's army to revolt against their Nicator and fight for their right to return home after 14 long years of war.
Marathi actress and activist Vanamala's Rukhsana isn't just another pretty face. She is very proud of her Persian roots, resists being addressed by a Grecian version of her name, has a strong, tactical mind and employs it liberally to propagate love and peace.
Ditto for Meena Shorey's Ratna. As Ambhi's nation-loving sister, she not only rebukes her brother for joining hands with a 'Videshi Raja' but teams up with Porous in his fight to preserve his country from the foray of outsiders. Porous, too, is shown to share a very sensitive relationship with all the women in his life -- his wife, daughter and sister. Before setting out to fight towards the climax, he asks all three their expectations from him and promises to deliver.
So does Sikander. So does Sohrab Modi.
Tags: Sikander , Rukhsana , Sohrab Modi , Meena Shorey , Aristotle
More