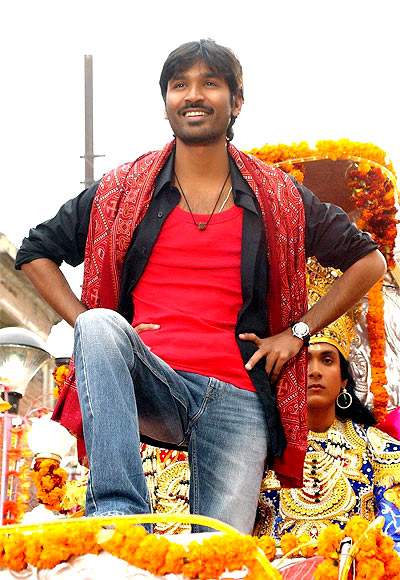 We celebrate Dhanush's birthday on July 28 by looking back at his best movies.

Dhanush demonstrated his extraordinary acting skills from his very first film, Thulluvadho Ilamai in 2002, when he was just 19 years old.

His lean frame and unconventional looks have never been a deterrent; in fact, his underdog image is a huge attraction for many who can easily relate to him and the characters he portrays.

Dhanush packs a powerful performance in every role. He is as comfortable in a comedy caper as he is in an action, romance or family drama. His dancing skills are legendary and he is an accomplished singer and successful producer as well.

Dhanush played a Hindu boy from Benares, who woos his lady love -- played by Sonam Kapoor -- with single-minded devotion.

His endearing performance was one of the biggest strengths of the film.

Dhanush picked up a few awards for his excellent performance in the film.

Image: A still from Maryan
S Saraswathi/Rediff.com in Chennai

In director Bharat Bala's Maryan, Dhanush played a spirited fisherman forced to leave the sea he is so passionate about and seek employment in a foreign land.

The film was based on a real-life incident about three oil workers from Tamil Nadu, who were kidnapped and taken hostage in Sudan by mercenaries.

Dhanush gave a commendable performance, but the box office collection was just average. 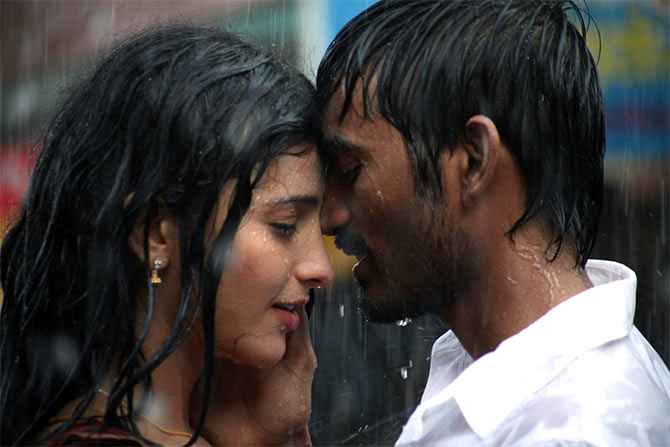 Image: Shruti Haasan and Dhanush in 3
S Saraswathi/Rediff.com in Chennai

Dhanush gave an intense and disturbing performance as a man suffering from bipolar disorder.

Though the film opened to mixed reviews, it went on to become one of the biggest money-makers of the year.

Much before the release of the film, music by newcomer Anirudh Ravichander created a huge sensation.

Kolaveri Di, sung by Dhanush, went viral on the internet and became an international rage. 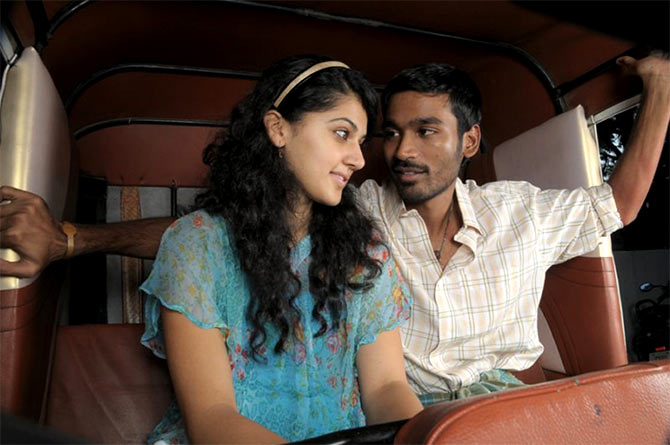 After the huge success of the megahit Polladhavan, Dhanush teamed up with Vetrimaran once again with Aadukalam, with spectacular results.

The film won six National Awards at the 58th National Film Awards, including for Best Director, Best Screenplay and Best Actor for Dhanush.

The film tells a tale of friendship, love and betrayal set against the backdrop of a cockfight. 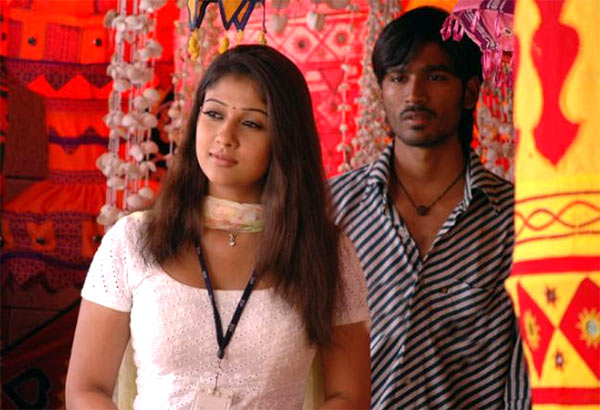 Dhanush played a love struck youngster craving for the love he cannot have.

A family entertainer with touches of comedy, Yaaradi Nee Mohini was one of the highest grossing films of the year. 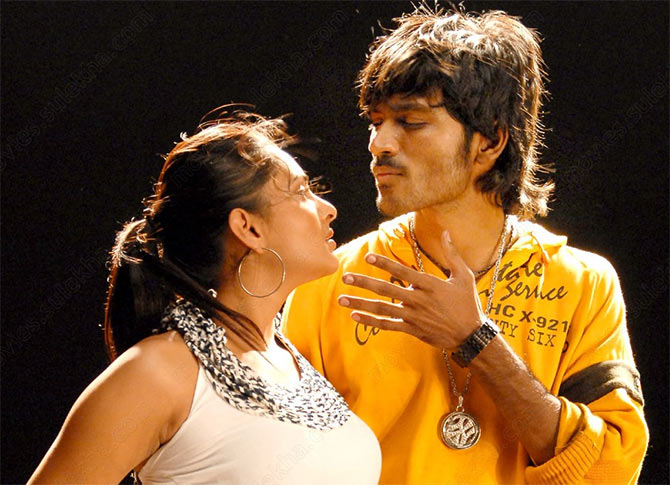 Polladhavan was inspired by the classic Italian film, Bicycle Thieves. It was directed by Vetrimaran.

The role seemed to be tailor made for Dhanush, who was exceptional as a gutsy youngster from a typical middle class family, whose life turns upside-down after his bike is stolen.

The film was a box office hit and one of the biggest hits of Dhanush’s career. 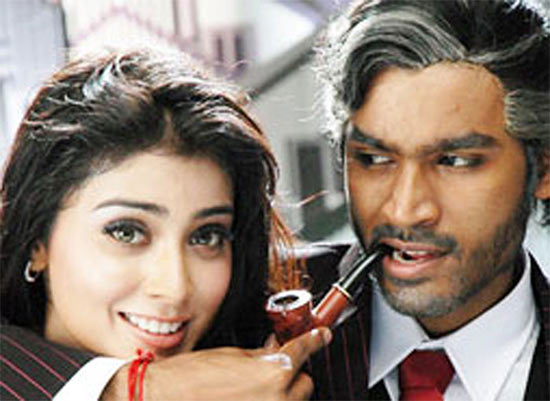 The cat and mouse game between Dhanush and Prakash Raj in Thiruvilayadal Arambam was highly entertaining.

A breezy entertainer with lots of fun and excitement, the film had the glamorous Shriya Saran paired opposite Dhanush.

The film opened to positive reviews and went on to become a super hit. 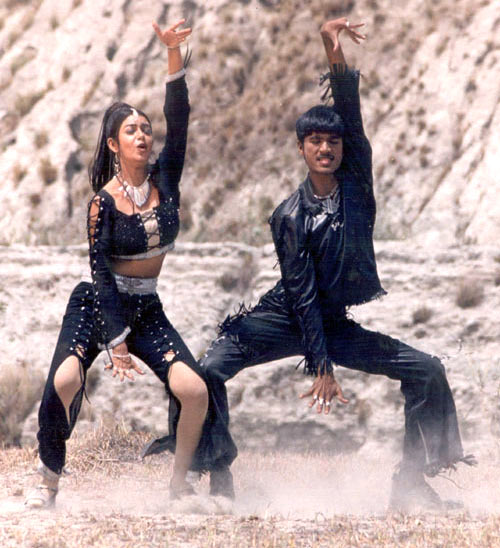 Image: A still from Thiruda Thirudi
S Saraswathi/Rediff.com in Chennai

Dhanush demonstrated his lighter side in the film. His comic timing was impeccable and earned him rave reviews.

His also displayed his amazing dancing prowess in the song Manmadha Raasa, which remained at the top of all music charts for 15 continuous weeks.

Dhanush teamed up with his brother, Selvaraghavan, who made his directorial debut with Kadhal Kondein, a psychological thriller.

The film was a huge sensation. Dhanush received much critical acclaim for his role as a poor orphan with psychotic tendencies desperately trying to woo his college mate, Sonia Agarwal.

The film was later remade in Telugu, Kannada and Bengali. 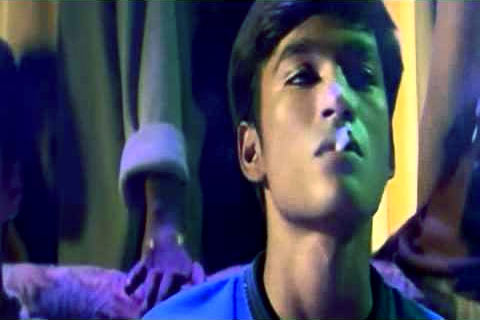 Dhanush was just a teenager when he made his debut in Thulluvadho Ilamai, a film directed by his father Kasthuri Raja.

He played a rebellious teenager trying to understand and fit into the world of adults, while at the same time coming to terms with his own confused emotions and sexuality.

The film was well received by the critics and also a success at the box office.