Review: Ouija has a few tricks up its sleeve 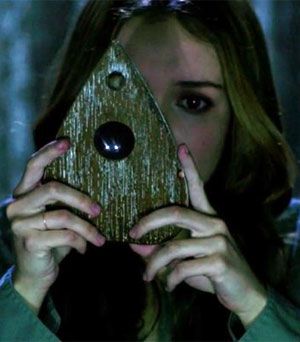 Given a choice between Ouija and the rest of the Halloween-targeted horror releases this year, I would pick Ouija any day, says Paloma Sharma.

There are three rules of the game:

The Ouija board was just another toy for Debbie (Shelley Hennig) and Laine(Olivia Cooke) when they were kids. But things change as the girls grow up.

Now a high school student, Debbie plays alone with an old Ouija board for fun, without realising the consequences of it.

Noticing the sudden changes in her behaviour, Laine, and Debbie's boyfriend, Pete (Douglas Smith), try to talk to her.

But Debbie avoids conversation and activities that involve socialising, going as far as barring Laine and Pete from entering her home.

When Debbie is found hanging from a chandelier, Laine decides to get to the mystery of her best friend's suicide -- she's wondering if it was a suicide at all.

Laine, Pete, and their friends try to use the Ouija board to establish a connection with Debbie's spirit, but when somebody else from the other side starts sending them messages that one would usually find in one's Facebook inbox from someone with one too many @s and $ signs in their names, the teens begin to realise that they cannot outrun the spamming spirit or their fate.

I'm sure the usher at the cinema hall will take your bets on who will go first and who will survive in the end.

For a fairly run of the mill concept, Ouija makes for an engaging watch primarily because it gives you enough material to guess and retains just enough to make you want to watch and see if your guesses were correct.

Although it is not nearly as imaginative and original as The Lego Movie, Ouija doesn't turn out to be as predictable as one would have thought it to be 15 minutes into it.

By the time you manage to figure out how to pronounce the name of the film, the first half will already be over -- which shouldn't be an issue, except that the pre-interval portion doesn't really establish much.

Armed with a strong enough backstory that feels like it's been inspired by the séance scene from the Insidious series, Ouija goes old school with the scare tactics but manages to add a new twist to them.

It is bound to keep you on the edge of your seat and sometimes, make you jump out of it in fright.

Director Stiles White times things perfectly, keeping you guessing for just the right amount of time before he finally pulls the plug (or sometimes, abstains from the same).

Although a lot of horror film clichés are used, the goosebumps-inducing second half of the film makes it worthwhile.

On the one hand, Laine and Co (who have a strange tendency of walking into the darkness, towards unnatural noises) are connecting wonderfully with whatever spirit is out there and on the other hand, the scenes appear to be disconnected, like they were thrown together at random.

The screenplay seems to have been in written in either a great hurry or during times of great boredom.

Characters come and go, a token grandmother warns about dire consequences relating to the dead and teenagers, as usual, act like idiots.

The character development seems to have been reserved solely for those who are not from the world of the living, or those who aren't mentally connected to it.

Cooke and Hennig seem entirely believable as BFFs but it feels a little bit unsettling to watch Cooke fight evil.

Cooke exudes so much goodness that you just know she's going to win.

With seemingly no darkness in her blessed heart, Cooke's character has no temptations and no chances of losing.

Most of the other actors seem far too old to be playing 18-year-olds and Lin Shaye remains completely unutilised.

Ouija could have done better with steadier camera work and better sound design.

Nevertheless, it does pull out a decent scare every now and then.

Given a choice between Ouija and the rest of the Halloween-targeted horror releases this year, I would pick Ouija any day.