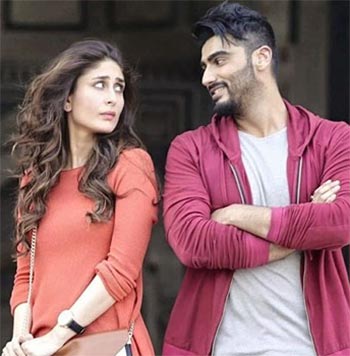 R Balki comes up with the most unique ideas, infuses them with a whimsical energy but in his eagerness to impress, he loses all subtlety, feels Sukanya Verma.

There’s hardly any reason for hue and cry. Roles are a burden only when imposed on an individual.

If a man and a woman are happy with the arrangement they have chosen for themselves, nobody outside it has any right to judge.

R Balki’s Ki & Ka examines the shifting dynamics of this ancient institution through a contemporary marriage between a homemaker husband and his breadwinner wife.

What it wishes for is praiseworthy -- to dispel chauvinism and prejudice. But in trying to erase gender stereotypes by reversing roles, he only reinforces them.

This is a recurring problem in Balki’s filmmaking. Certainly, he comes up with the most unique ideas, infuses them with a whimsical energy but in his eagerness to impress, he loses all subtlety.

And so naming the film Ki & Ka isn’t sufficient. Kareena Kapoor Khan and Arjun Kapoor’s characters are called Kia and Kabir to drive the point home. It’s almost a throwback to the time where the leading pair would be named Shyam and Radha or Deepak and Jyoti to underscore their eternal association.

Still negligible compared to the engineered, caricaturish manner in which Balki highlights the nonconformity of Kia and Kabir’s relationship.

There’s a moment where Kabir proudly shows off his mangalsutra to his office-bound spouse as a gesture of his dedication to ghar-grihasti. Another when he’s feigning a headache to his aroused wife in bed. A premise like this one deserves nuance not mockery.

Ki & Ka is obviously taken in by its liberal notions but fails to realise that it’s not so uncommon in today’s urban context where lots of working men and women share both their professional and personal duties.

For one, I wasn’t convinced about Kabir’s aversion to jobs (or his bizarre sense of interior design). He’s got a degree in business yet doesn’t want to get into the rat race because it destroys family life and refers to his deceased mother as an artist but sounds bitter about the little recognition that she got.

It’s a bogus characterisation but Arjun Kapoor plays Kabir with a good amount of vulnerability and an unfazed, endearing charm, finishing off some of the most casual scenes with a crusty last word. To his credit, a thoughtful young man shines through that oafish surface.

I enjoyed his meet cute bits with Kareena, the PAN card quip, the shared birthdays. Their age difference pops up once in a while and quietly plays on Kia’s psyche.

Both are a product of single parenting with his indifferent millionaire daddy (suitably tetchy Rajit Kapoor) and her free-spirited social worker mom (Swaroop Sampat says her lines with a tinge of incredulity) chipping in as the voice of progress and preconception (not to mention crude, misplaced humour).

Still, things stay hunky dory for most part -- Kia never has a bad day at work. Kabir is a housekeeping expert.

Ki & Ka avoids treading on their dark areas -- frail ego and bubbling insecurities -- for as long as it can help.

When it does, it’s at its most appealing. Balance tilts, roles advance and the husband and wife find themselves ill equipped to handle the inevitability of change.

Balki treats success like an evil in his story, triggering a feeling of neglect in one and jealousy in another. It’s at this juncture; Kareena Kapoor Khan proves what an asset she can be.

Her incandescent beauty exudes easy warmth and professional poise as per the occasion. The actress smoothly transitions between fragile and volatile to reveal a woman comfortable in her own skin, unapologetic about living life on her terms and never missing an occasion to mince words.

A special appearance by Amitabh and Jaya Bachchan, as themselves, even if gimmicky in nature, works as an amusing slice of celebrity life providing a catalyst during a stalemate in Ki & Ka’s.

Ultimately, gender describes but doesn’t define a person. There’s no breakthrough in swapping roles. If anything, it only confirms how superficial the conflict is. At the end of 126 minutes, Ki & Ka figure this out too.

But is there a need for definite roles at all is what it should be asking.

Get notified as soon as our Movie Reviews are out!
Sukanya Verma
SHARE THIS STORYCOMMENT
Print this article 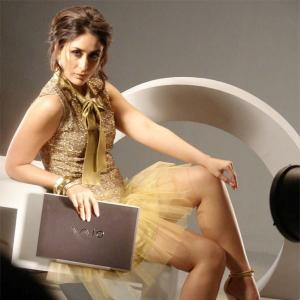